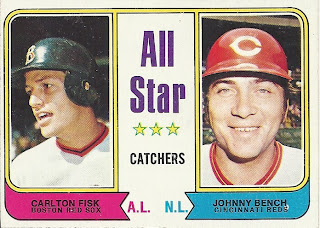 The second half of the '74 set kicks off with a special sub-set. Anyone viewing the checklist post for this group of cards many moons ago saw this coming. This will be the last All-Star sub-set for Topps in a long time. For the next bunch of sets Topps would designate All-Star status on each player's regular card, except for '75 when they put the distinction on Hank Aaron's special card. We begin this group with the starting AL and NL catchers, represented by a pugnacious-seeming Carlton Fisk and a smiling Johnny Bench. Those are two pretty good representations for these guys back then: Carlton had been in the big brawl with the Yankees and Johnny was already doing commercials and appearing on variety shows. Neither of them was a stranger to All-Star play during his career as Fisk got 11 selections and Bench 14. And they're both in the Hall of Fame.

There's not too much to do with these cards commentary-wise since most of that is with their regular cards. So let's go with the stats that got these guys on the team. I will also add the alternates and their stats just to make things complete. I am not doing a deep dive because that takes too long. For position guys I am just going with average, homers, and RBI's. For the pitchers, just the record and ERA. All these stats are as of the All-Star break which means they do not perfectly represent the stats that warranted selection since they'd have been from a few weeks earlier, but they should be pretty close. First for the AL guys:

Bill didn't get in the game and by then was sort of a legacy guy. Now for the NL:

Just on power alone I think the edge there went to the second bunch. 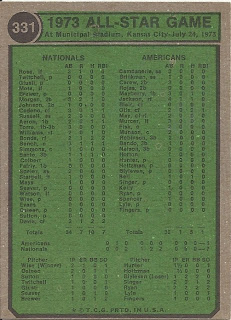 On the back of this card Topps gives the box score of the game which is I think a nice touch. It wasn't much of a game. The NL basically wiped up the floor with the AL team which only managed five hits. There was an injury: Catfish Hunter nearly lost his hand trying to field a come-backer and all the non-Oakland pitchers with the exception of Sparky Lyle got bombed. Back then the NL was on a pretty good run. From 1950 to 1985 the AL only won five times and one game ended in a tie. That's a pretty nasty record. But over that time the AL had the edge in the Series. That was compensation if you were an AL guy like me.

There are a few music items to mention. In '73 on February 11th there was a variety show tribute to Duke Ellington which included appearances by Roberta Flack, Aretha Franklin, Ray Charles, and the group Chicago. On the 13th the soundtrack to Elvis' big satellite show in January went gold and on the same day Elvis got sick performing in his resident home in Vegas. The doctor that treated him off-stage was given a Lincoln Continental. Nice fee. In '74 on this date a new club in NYC opened called The Bottom Line. Stevie Wonder, Johnny Winter, and Dr. John all performed at the unveiling. The club would raise its profile later that year in August and moreso in August of '75 when Bruce Springsteen performs a bunch of legendary shows there. It closed down a few years ago when landlord NYU took over the space. It was a great club.

No hook-ups this time. They'll be resumed on the regular cards. So to return to baseball, let's do the recap thing since the last post memorialized half the set.

Post-Seasons: as in the last rundown, all post-season play from 1957 to 1989 is represented by at least one participant with the exception of 1960. All years from '72 to '74 are represented by 48 participants.

Awards: not to put anyone down, but the last ten per cent of this year's cards have been a pretty pedestrian bunch and most of these numbers barely move. We are up to 18 MVP's, 12 Cy Young winners, 16 Rookie of the Year winners, and 17 Comeback Players of the Year. There are now seven winners of The Sporting News Minor League Player of the Year, 15 Manager of the Year winners (although two of them won multiple times), and 10 Firemen of the Year.

Milestones: another slowdown here. We have 28 rookie cards, 31 Hall of Famers, 35 cards of people who were traded prior to the season, 19 cards representing that player's final Topps entry, and 34 cards of players who have since passed. While that last category has sadly spiked a bit, it still is hovering around eleven per cent of the cards which I think is pretty good.

Rookies: only the '62 Topps rookie set is now not represented in this set. The years and their representative totals are as follows:

If this percentage keeps up - I don't think it will - then this is not too bad. From a very cursory run-through Topps' ability to pick rookies who would go on to substantial MLB careers was much better on the position guys than on the pitcher side.

Random: there are now 78 action shots, 107 cards of players in home uniforms, and 185 of guys in away uniforms. There have been 25 cards with players that have the parenthetical name thing, and ugly cards (thankfully) and cards of guys who served in Viet Nam (surprisingly) are still stuck at five and four, respectively. There have been 12 Washington Nat'l cards so far but that number will soon hit a wall.
Posted by wobs at 11:59 PM