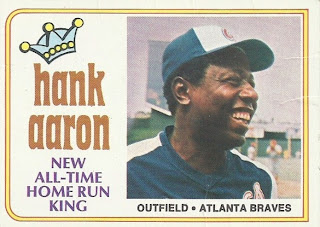 This is the second year in a row Hank Aaron appeared on the first card in the set (in 1973, he was joined by Willie Mays and Babe Ruth), which is appropriate given what was going on in his career at the time. I think his '73 numbers are pretty awesome - 40 homers and 96 RBIs on less than 400 at bats. Yes, he had two other 40-homer batters in the order and would have therefore been seeing a lot of good pitches, but still these are very impressive numbers. There is not too much commentary I can add about this man that isn't out there in much more deservedly prestigious forums. One bit is that I once read that as a kid Aaron had to bat cross-handed to keep him from over-swinging. Also, I think he is under-rated.

This is the first card of the six-card commemorative set. The front of it is way different from the standard player card - no pennant. It is nice to see Aaron smiling given all the crap he was putting up with at the time the photo was probably taken. The photo is from the '73 All-Star Game, which was held in Kansas City (that is the Royal's crest on the scoreboard behind Hank). For the '73 game Hank was voted in as the starting NL first baseman, an interesting choice given he played not a game at first during the regular season.

Hank Aaron is one of a plethora of major leaguers in this set who hailed from in or around Mobile Alabama (Cleon Jones and Tommie Agee are two more just off the top of my head). His family was quite poor and Hank - then called Henry - was an excellent athlete at his segregated high school. For his junior and senior years he managed to hook up with a local prep school and in summers he played semi-pro ball, during his HS time primarily as a shortstop. He graduated in '51, signed with the Indianapolis Clowns of the Negro Leagues, and helped that team to the '52 league title, hitting .366. That June he signed with the Braves, then still in Boston, and the duration of that season hit .336 in C ball and finished the season as his league's rookie of the year. In '53 Hank moved to A ball, where he was one of the first black players in the Sally league. Despite some initial antagonism, Hank won over fans with his .362, 135 RBI season. The next year he moved up to Milwaukee.

Aaron put up a pretty good rookie year in '54 and never looked back, putting up 21 All-Star seasons, three Gold Glove seasons, and one MVP year. The coming cards have plenty of commentary through the '73 season. Hank broke The Babe's record early in '74, in a season that was generally a pretty big discount to his prior one. After that year he returned to Milwaukee via a trade to the Brewers for Dave May. Hank did two years as a DH and then retired following the '76 season. He finished with a .305 average on 3,771 hits, 755 homers, and a still-record 2,297 RBI's. In the post-season he was even better, hitting .363 with six homers and 16 RBI's in 17 games. He was elected to the Hall on his first shot in '82.

After playing Aaron did lots of admin work for the Braves and ran his stable of fast food restaurants and auto showrooms (he sold the latter stores off in 2007). 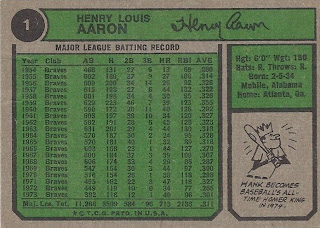 By the way, my scanning skills are less than optimal. Some of the cards so far look a lot more crooked than they actually are. I will hopefully improve and also work on making the site more appealing. That said, Hank's card on the back is a typical player one for the set. A name and signature fill in the top part and when space allows there is a series of "star bullets" that indicate playing highlights for each player. Than come the stats and over to the right some personal info and a cartoon. This cartoon may be the only one I have ever seen on a Topps card that refers to a future event.

There are a bunch of amazing blog sites out there regarding different Topps sets. My favorites are the '65, '67, and '75 sites. While this is not my favorite set, the '74 set is not yet represented, so I thought, what the hell? I am ego-centric enough to share my thoughts with the blogsphere and god knows at my age it is one place at which I might actually get some attention. Plus, what with the Aaron cards, the first Traded set, and the Washington Nat'l cards, at least there are enough unique aspects of the set to keep things interesting as long as I don"t mess things up. I have the whole set minus a couple variants that I will try to acquire over the course of the blog. And I will definitely be "borrowing" some commentary ideas from my forerunners listed above, all done in deep respect.
Posted by wobs at 7:30 AM No comments: