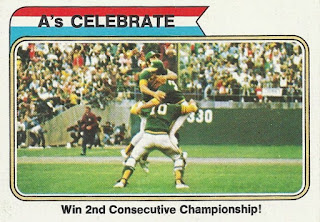 And there it is. For the second time in two years Oakland won a Game Seven to take the Series title. Here Sal Bando jumps on Darold Knowles who has jumped on top of Ray Fosse after Knowles got Wayne Garrett to pop up to end the game. That appears to be umpire Russ Goetz rushing to safety in his maroon jacket before the field gets stormed by A’s fans. They’d actually already mobbed Reggie Jackson in right after the second out and time had to be called until they were escorted away from things. But for a few short moments it was good to be an A. Yeah, their very successful manager was leaving and the players all had to still put up with owner Charlie O Finley. But for the rest of the off-season the battling A’s didn’t have to battle any more and they would return essentially intact for ’74 and one more Series win. What’s a little controversy if it means three straight titles? 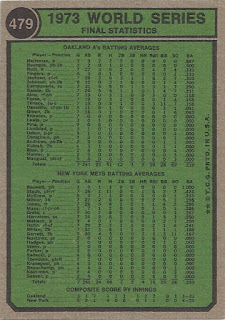 So once again Topps disses the pitchers, which is too bad since they generally outperformed the hitters. We remedy that below. So the Mets outhit, outscored, out-homered, out OBA’d, and, from that fat difference between runs and RBI’s, out-took-advantage-of-errors and still ended up on the losing end. But they also left a bunch more guys on base – about 68 to 58 – and, from my recall of the narratives, just weren’t as clutch. On the Oakland side Joe Rudi quietly had himself a nice Series and Gene Tenace, though he only hit .158, had a .467 OBA from all those walks – nearly half his team’s total. Reggie had a nice Series too, but he got recognized for it by being named mvp. On the NY side Rusty Staub really kicked butt and added a homer to his three from the NL championships. I love that Willie Mays went out with a respectable .286. NY was pretty democratic with the walks but poor Wayne Garrett really stands out with all those K’s. But the big question NY fans had after the Series was why wasn’t George Stone used more? On the surface the answer was pretty obvious: he was a lefty as was most of the Oakland starting roster. But Jerry Koosman and Jon Matlack were lefties also and they each got plenty of time. Stone was NY”s hottest guy down the stretch and he had a real nice start against Cincinnati in the playoffs but Yogi went with his three guys and that was the hand he dealt himself. For the Oakland guys it must have been nice for the other team to have some controversy for a change. Here are the pitching stats:

Those are some damn good pitching lines. Lots of unearned runs, particularly behind Matlack and Fingers. And poor Tom Seaver: the guy had the best stats of anyone and only came away with a loss.

It’s December 31 and this puppy is going to bed for the year. Happy New Year!
Posted by wobs at 11:59 PM No comments: 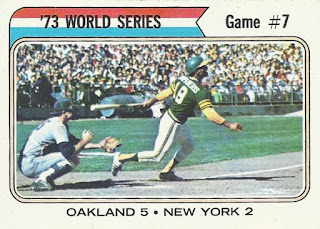 For the third year in a row the World Series was going to seven games. And for the last two years both deciding games were won by the away teams so recent history was oddly in the Mets’ favor. For the third time in this Series Ken Holtzman was going up against Jon Matlack and Matlack hadn’t had a bad post-season game yet. But as this card so ably points out in both the score and the photo all that was for naught. Here we have Bert Campaneris, of all people, breaking the Oakland homer drought with his shot in the third inning and like on the last card Jerry Grote just gets to watch as the Cinderella season finally slips away from him and his teammates.

Game Seven started late for a Sunday game – about 4:45 PM – I guess so people on the east coast could tune in after dinner and football. In the first two-and-a-half innings the two starters only allowed a base runner between them but things changed dramatically in the bottom of the third. After a strikeout by Dick Green, Holtzman hit his second double of the Series, again down the leftfield line. Campaneris followed with his homer, Oakland’s first of the Series. After a Joe Rudi single and a Sal Bando pop-up, up came Reggie Jackson, in no mood to be outshone in the power department by a shortstop. So Reggie lofted his own two-run shot and all of a sudden Oakland was up 4-0. Harry Parker came in to replace Matlack and gave up a walk before a pop-up by a pinch-hitting Vic Davalillo ended the inning.

In the fourth the Mets made some noise on a Rusty Staub single and a Cleon Jones walk, both on two outs, but a John Milner groundout ended that. After Parker breezed through the fourth, Grote led off the fifth with a single but he got stranded also. In the bottom, Ray Sadecki came in and gave up a Campy single to left that Jones bobbled, allowing him to get to second. He then scored on a Rudi single to center and it was 5-0. Ray calmed down the rest of the inning and then it was NY’s turn. Felix Millan stroked a one-out double and Staub followed with a double of his own, shades of Oakland’s scoring in Game Six. Millan scored, chasing Holtzman in favor of Rollie Fingers. Fingers got Jones on a deep fly to right that moved Rusty to third but Milner hit another groundout to leave him there. After Sadecki got three quick ones in the bottom the Mets made some more noise in the seventh. Don Hahn singled and after Bud Harrelson flied out to center for out two Ken Boswell pinch hit for Sadecki and got his third successive pinch hit of the Series. But Wayne Garrett left them both on with a strikeout. In came George Stone, curiously absent in the Series. He gave up a single to Fingers and a bunt single to Campy before striking out the side. Both pitchers breezed through the next half-innings and up came NY for their final licks. Milner walked and Grote flied out to left. Hahn then singled and Harrelson then moved the two runners up with a bunt on which Fingers nipped him at first. Ed Kranepool then pinch-hit for Stone and hit one to first, seemingly ending things. But Gene Tenace bobbled the ball, Milner scored, and Hahn went to third. Thirteen years later an error at first would resuscitate a Series for NY but not this time. Darold Knowles replaced Fingers and with runners on the corners Garrett lofted a fly to shallow left and Campy caught it. A’s 5-2 and the mini-dynasty was on. 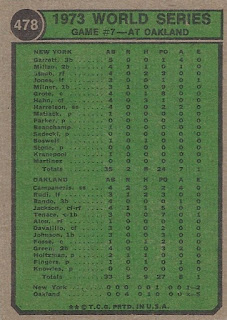 This was Knowles’ seventh game which set a Series record for a pitcher. He got the save, Holtzman the win, and Matlack took the loss. Here is the pitching line: