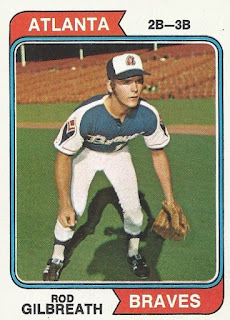 I have to hand it to Night Owl. He lives in pretty much the same part of the country as I do and the guy gets out a post every day. My posting time has been consumed by snow removal so my posts are lagging. I am sure he's dealing with the same stuff I am so I don't know how he does it.

Back to this blog, we have Rod Gilbreath at Candlestick in a more-or-less classic infielder pose. It looks like a beautiful sunny day and look at the ground: you can actually see the photographer's shadow as well. I think that's a first for this set. '73 was a season of change for Atlanta: between the trades of Orlando Cepeda snd Earl Williams and the return of Hank Aaron to the outfield, not one first baseman from '72 was available. So Darrell Evans began the season there and our boy Rod here came out of the box as the starting third baseman. He did pretty well too, posting a decent average and only two errors during his month of starts. But the '73 Braves were built around the long ball and when Mike Lum decided to join that party he got moved to first, Evans returned to the hot corner, and Rod went back to Triple A where he would put up pedestrian offensive numbers but also very good D. So unfortunately for Rod he not only had to put up with the photographer's shadow but also the combined ones of the whole Atlanta infield.

Rod Gilbreath grew up in Mississippi and was drafted out of high school in 1970 by the Braves. During his first three minor league seasons he moved from Rookie ball to Double A  and put up pretty good offensive numbers at each stop while playing primarily third base. He was quite a base-stealer as well. In '72 he had a rough start at the hot corner - a .924 fielding percentage - but still was called up to Atlanta late that season. The scouting book on him that year noted that he had good range at his various infield positions but that he needed more seasoning. After his near-breakthrough in '73 he remained in Triple A for all of '74, that year playing only second base while hitting .254 with a .354 OBA.

In '75 Davey Johnson went to Japan and Gilbreath got his chance. He split time at second that year with Marty Perez and then became the primary guy there the next two seasons. While Rod fielded well enough and had serviceable offense numbers, his average during that time - around .248 - was a pretty significant discount to his two All-Star predecessors, Johnson and Felix Millan. Plus he left his big stolen base numbers in the minors. In '76 Rod led the NL in sacrifice flies. By '78 Glenn Hubbard and Junior Moore were moving in to take away Rod's field time at second and he spent most of his time that year back at third. The following season he signed with Pittsburgh as a free agent, but it was the same story as his early days in Atlanta: there were a couple All-Stars ahead of him at his two positions in Bill Madlock and Phil Garner. As a result Rod played exclusively in the minors the next two seasons and 1980 was his final year as a player. He hit .248 lifetime with a .320 OBA. In the minors he tapped the ball at a .277 clip with 44 homers, a .361 OBA, and 165 stolen bases.

After his playing time ended, Gilbreath returned to the Atlanta system as a scout, managed its Rookie League team in '86 and '87 - he went a combined 68-72 - and then moved to the admin side. During the Nineties he was Atlanta's director of minor league operations. He then returned to scouting for the team, a position he still holds, according to Linked In. 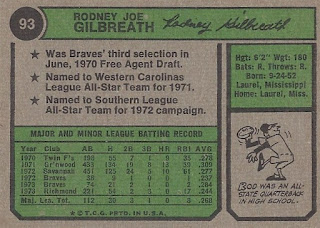 Rod was big for a shortstop. He also had a great full name for a quarterback from that neck of the woods. Keith Jackson would have loved him.

This will be quicker than I thought, thanks to a former ROY guy: