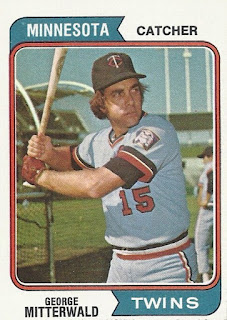 George Mitterwald liked chaw. He has it in his right cheek on the regular card of this set, his '70 card, '77 card, and '78 card and maybe others although I can't tell. George is coming off a career year in '73, which made the below trade a bit surprising but what do I know. He sure looks like he plans to do some serious business with that bat in Oakland. That might be Rod Carew behind him adjusting his uniform.

George Mitterwald is yet another Cali kid who attended a regional college when he graduated high school. George's was Chabot, the same school Dick Tidrow attended. George was drafted by the Twins in '65 upon finishing school - he is the second draftee by the Twins in a row - and hit the ground running, tapping the ball at a .326 clip for two Single A teams. He remained at that level the following season then moved up to Double A the next year, both seasons hitting around .250, and then reached Triple A in '68, a year he played a little outfield along with catching while moving his average up to .267. He also saw a little late-season action up top. All three of those years he lost a bunch of time to military duty. He made the Twins for good in '69 when he backed up John Roseboro and then saw his first playoff action. The next two seasons he became the Minnesota starting catcher, displaying some decent power and high strikeout totals to match. In '72 George lost time to groin and shoulder injuries and his stats plummeted but in '73 he had a nice comeback, grabbing career-best numbers in pretty much all major categories. Then came the trade. 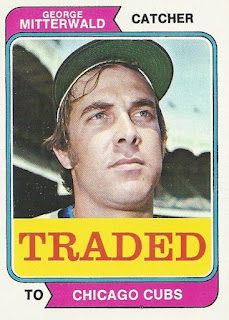 In Chicago Mitterwald would end up splitting time with a young Steve Swisher - Nick's dad - as he began his first season there pretty much in a rut despite a huge game against Pittsburgh when he posted a three-homer, eight-RBI day in one of his first starts. He'd lost the starting catching gig to his .182 average in early June but from there on rallied to hit .372 the rest of the way to finish at .251. Beginning in '75 George would also put in some time at first. That allowed him to pick up some playing time so that by '77 he was able to record the most at bats since his '73 season. After hitting around the .220 level the past couple years, he was actually putting up pretty good numbers when that June he got involved in an incident while catching. Rick Reuschel had popped Reggie Smith of the Dodgers with a pitch that sent Smith storming to the mound. George intercepted Reggie, throwing him to the ground, but in the process injured his shoulder which pretty much killed the rest of his season and then his career. He left the Cubs as a free agent and in '78 signed with Seattle. For the Mariners he would post some games at Triple A but after hitting only .162 he was done. He finished hitting .236 with 76 homers and 303 RBIs. In the post-season he hit .333 in four games.

On Mitterwald's Traded card there is very little air-brushing and if he has any chaw it's pretty well hidden. But the backdrop of Yankee Stadium makes it pretty obvious he's not in a Cubs uniform. His nickname was The Baron and here with his blue eyes and relatively short hair he does have a sort of Teutonic flair thing going.

Mitterwald would return to baseball through coaching in the minors. By '79 he was coaching in Oakland where he would stay through '82. From '83 to '85 he managed at Modesto, the A's California League Single A franchise, winning the division twice and one title. In '86 and '87 he moved to Orlando, a Twins Double A franchise. Orlando had been and still is his home base so I am not sure if he stayed local or coached after the managing gig. In '96 he began a three-year run as the manager of Duluth, an independent team. That's pretty much the last info I have on him. For a manager he has gone 475-485. 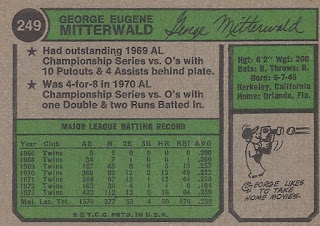 George has a nice signature - very legible. He gets some good star bullet props for his post-season work. In '70 when there was a bomb scare at the Twins' stadium George reputedly ran in full catching gear to a nearby motel where he sat out the delay. That would have been a good cartoon. 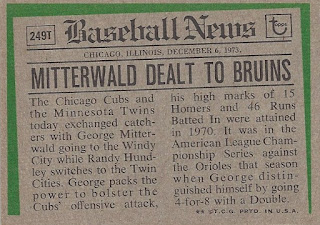 No hints on the traded back as to why the Twins sent George, apparently in his prime, to the Cubs for Hundley, who was fading fast and hit .226 the prior season. Too many strikeouts? Owner Griffith was sort of infamous locally for jettsoning what he considered high salaries. Topps does the weird thing with the narrative here, completely disregarding George's '73 stats by indicating that the ones he put up in '70 were his best. I guess they didn't believe in updating their research back then although they could have just looked at their own card!

Two Twins so this one is easy: