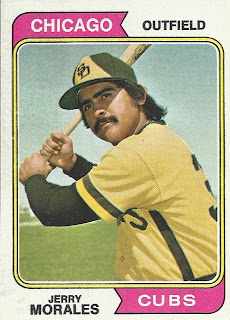 Here is the flip side of the Glenn Beckert trade from several cards ago. Like the Beckert card this one is unusual for this set in that the player retains his old uniform but is listed on his new team. I actually think it's an uptick to the air-brushed cards although this one is not nearly as good as Glenn's. Then again, it's not an action shot and it has one of the ugly old-school road Padres uniforms. But Jerry does have a slamming '70s 'stache. It would have been cool if he displayed his true batting stance too. Jerry used to hold the bat way high - sort of opposite to Ricky Weeks - when awaiting the pitch, the knob of the bat about even with his head. He was only about 160 pounds back then and sometimes he looked like he was going to fall over.

Jerry Morales was signed as a free agent out of PR in '66 by the Mets when he was only 17. He hit .345 in Rookie ball that summer and the next couple seasons, while he hit pretty lightly in A ball, he did impress people with his skills in the outfield. A fast little guy, he would race to the ball and at the last second make a basket catch, a style he took to the majors. Following the '68 season he was selected by the Padres in the expansion draft. With San Diego the next three seasons Jerry stuck mostly in the minors, at both Double and Triple A, where he upped his average to the .270 levels and showed some selective power. In '72 he came up and was the Padres' most regular center fielder, a position he also played in '73 when he moved his offensive numbers up considerably. After the season he was traded to the Cubs for Beckert and Bobby Fenwick, a reserve middle infielder.

Morales would hit his stride in Chicago as he would start pretty much everywhere in the outfield the next four years. He kept his average in the mid-.270's, added some hefty RBI totals (he got 91 in '75), and became an entertaining figure and fan favorite with his catches and his unorthodox hitting style. In '77 a fast start got him named to the All-Star team. It would turn out to be a mixed blessing because while he scored a run in the game he also got clipped in the knee by a Sparky Lyle pitch. He would then miss some time which contributed to the Cubbies' fade that season and would also see a general decline in his stats the rest of his career. After the season he was traded to the Cards with Steve Swisher for Dave Rader and Hector Cruz.

Morales was pretty much a disappointment in St. Louis. Playing in roughly the same number of games as in the prior year, his offensive numbers fell pretty hard: his doubles were cut in half, his RBIs by a third, and his average fell from .290 to .239. After the season he was sent to the Tigers with Aurelio Lopez for Bob Sykes in a deal that worked out super for Detroit in the '80's, but not because of Jerry. His average dipped to .211 and following the season he was sent with Phil Mankowski to the Mets for Richie Hebner. He only played about half a season in '80 for NY and while his average recovered by over 40 points, he left as a free agent and was signed by the Cubs. Back in Chicago Jerry hit .285 the next two seasons as an outfielder reserve and pinch-hitter. In '83 his average fell to under .200 and he was released, ending his time in the States as a player. He finished with a .259 average, 95 homers, and 570 RBIs.

Like other recent post subjects Morales would stay close to baseball after he played. From '84 to '86 he was the Cubs' minor league roving batting and outfield instructor and from '87 to '90 a scout for the Dodgers. From '86 to 2002 and from '05 to '06 he coached in the Puerto Rican Winter Leagues where he also played during his career. From '99 to 2000 he managed the San Juan team there. From '02 to '05 he coached up top for the Expos and since '06 has been with the Nationals after finishing a gig coaching the Mets' franchise in PR. 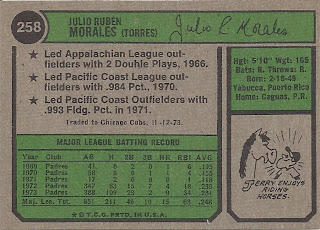 Jerry gets star bullet props for his defensive work, but is that first one really necessary? There is a funny bit from when he played for the Mets in '80. The postgame show forever was hosted by Ralph Kiner. a Mets announcer. Once when Ralph had Jerry on he reminded the player that when he was a Padre he always bowed out of appearing on the show, claiming he couldn't speak English well enough. When told that he would be paid to appear, all of a sudden Jerry's English got markedly better. As for the cartoon, it reminds me of all those bucolic photos and videos of people riding horses on the beach. It always looked so nice. When I vacationed in Costa Rica once I got to experience the downside of that activity: to get out to the surf I had to paddle through a nice layer of horse poop. That part never makes the commercials.