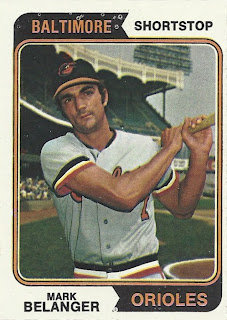 Here we have Mark Belanger posing at Yankee Stadium. Mark not only played for the Orioles but was also from Boston, so this choice as a setting may have been tough. Because of the pose and his high choke it almost looks like he's holding his bat upside down, like an oar. He almost wasn't an Oriole for this shot. After the '72 season, one in which Mark split time at shortstop with new thing Bobby Grich, Mark was to be included in a big trade to Atlanta in which he, Eddie Watt, Johnny Oates, and Pat Dobson were to be exchanged for Earl Williams, Marty Perez, and a phenom at the time named Taylor Duncan. But the trade fell through when Atlanta wouldn't give up Duncan and a day later the same essential trade happened except that Perez and Watt stayed put and the Braves got Davey Johnson - and his 43 homers - instead of Belanger. The contested Duncan would put up one season with Oakland in '78 and then be done. Mark here won the first of six consecutive Gold Gloves, Grich settled in at second, and relative harmony ruled in Baltimore for the balance of the decade.

Mark Belanger came out of Pittsfield, Mass where he played both basketball and baseball. He later credited hoops with his ability to move so well laterally at shortstop. For a while the Red Sox and Orioles were neck-and-neck in signing him in '62 but Mark went with Baltimore because their scout saw him in about 35 games while the BoSox guy only came to about five. That summer he did a nice job offensively in D ball, hitting .298 with a .486 OBA. He then missed all of '63 for the Army and when he returned the next year hit a portentous .226 in A ball. But after working a bit in the spring with Ron Hansen his defense improved markedly and the next two seasons he moved up a rung, improving his D each step, and hitting .262 in '66 at Triple A. Each of the '65 and '66 seasons he got short looks up top.

In 1967 Belanger came up to Baltimore for good, putting in time behind Luis Aparicio at short and Davey Johnson at second. His hitting wasn't anything special, but he impressed everyone enough with his glove that Little Louie, who really wasn't terribly kind to Mark, was traded back to the White Sox. The new O's shortstop pressed at the plate in '68 and the next spring spent a bunch of time working with Charlie Lau, ostensibly the Baltimore bullpen coach, but apparently on his way to his renowned hitting guru status. Mark upped his average 80 points and put up the best offensive season of his career in '69. He would then uncharacteristically homer in the AL playoffs. In '70 he returned to earth average-wise before rebounding the following year. In '71 he also won his second Gold Glove (the first came in '69) before he kicked off his big string a couple years later. '72 was pretty crappy for him between Grich's ascendancy and a bit of a decaying relationship with manager Earl Weaver. But then came all the defensive wizardry, an All-Star selection in '76, and by '78 the highest lifetime fielding percentage for a shortstop ever. Mark would be the regular guy through that last season when Kiko Garcia and then Len Sakata replaced him. But both those guys were just stopgaps until some kid named Ripken came along. In '81 Mark - who'd been the Baltimore player rep for a bunch of years - was a big presence in the pre- and post-strike negotiations with management. That is never a career builder and when he added a public declaration about Weaver losing his mojo, his time in Baltimore was done. In '82 he signed as an infield reserve with LA and then hung them up. He finished with a .228 average, 167 stolen bases, and a .300 OBA. I only mention that last number because for a few years in the midst of his career he put up the best O numbers for that stat which shows its light regard back then. Along with the eight Gold Gloves he led the AL in fielding at short four times and assists three times. In the post-season he hit .183 in 43 games. He ranks high across the board in defensive stats for his position but lost the best fielding average years later to Cal, among other guys.

After playing Belanger capitalized on his player rep status and became a union representative, mostly as a rep to the players. He eventually worked up to being union head Don Fehr's assistant which he was still at when he contracted lung cancer in the mid-Nineties. He passed away of pneumonia related to his cancer in '98. Mark was 54. 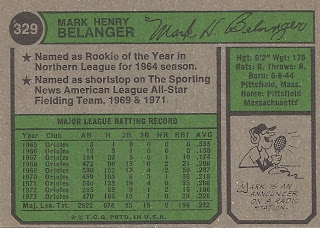 Mark gets some recognition for his awards in the star bullets. He was an all-star each league he was in once he got back from the service. Regarding that, he also put in a couple years of reserve work in the National Guard after his Army hitch. I like the cartoon but have not been able to find any specific information regarding it. Given his backround, I'd say he did a little hoops work locally.

Jutze played with a former Oriole and a future one so this is pretty easy: