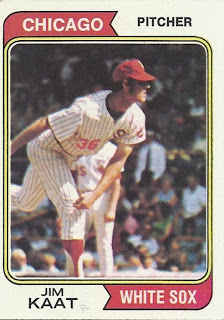 Now this is unusual in this set. Two posts after Ed Herrmann we get one of his battery-mates with an action shot of Jim Kaat. Sometimes this happened when an off-season trade occurred and they got wind of it early enough to change the team designation on the card but not the card number. But in this case Kaat had changed hands in the prior season. Just an anomaly I guess. This trade certainly had a silver lining for Jim as can be told by his seven-game record for the ChiSox. It got even better as he became a 20-game winner the next two seasons for the first time since his big ’66 year. I would guess that happened at least partly as the result of the influence of Sox pitching coach Johnny Sain. Jim gets an honorary card in ’74 and unless Topps was incredibly prescient the guess here is he was awarded it since he was on the cusp of his 200th win. Here Jim gets it on probably warming up in Chicago, given the less than prepared status of the first baseman behind him; my guess is it’s Tony Muser. I like this action shot, but not as much as Jim’s ’73 one: about to run to first base after just stroking a ball to the right side.

Jim Kaat grew up in Zeeland Michigan where he pitched all through high school and then attended nearby Hope College where he continued to do so as a freshman. Following the season he was signed by the old Senators for $4,000. DC wanted to give him more but that would have pushed him to bonus-baby status and Jim wanted to pitch in the minors. That summer of ’57 he had a middling year in D ball, going 5-6 with a 3.70 ERA. His coach suggested he add weight to help get his fastball cranking – though he did K 95 guys in his 73 innings - so Jim lifted in the off-season and came back 15 pounds heavier. The immediate returns were pretty good as he went 16-9 with a 2.99 ERA and 245 strikeouts in 223 innings in C ball. He cooled off a bunch in Double A the next year but did get his DC debut that season with his highlight being 19 strikeouts in a game at the lower level. In ’60 it was all Triple A and DC and his first Topps card. The next year when the franchise moved out west to Minnesota Jim went with them.

After a tough first year with the Twins in ’61 Kaat settled down and for the next decade put up consistently good numbers. Excluding an off year in ’63 he would average 17 wins, an ERA just over 3.00, and excellent control for the rest of the decade. In ’65 he pitched the pennant clincher and then did pretty well in his three Series starts, each one against Sandy Koufax. In ’66 he probably would have won a Cy in his big 25-win season if one was offered back then in both leagues (Koufax won it in his final season). Beginning in ’62 he had an annual monopoly on Gold Gloves for a pitcher, winning one every year through ’77 and in ’62 and ’66 he was an All-Star. He also could hit pretty well for a pitcher, posting a decade-high .247 in ’65. In ’69 he was again playoff-bound but he got shut out of any post-season play. In ’70 he won 14 for the third consecutive year and again went to the playoffs, but this time was bombed in his only start. In ’71 he posted his first losing season since ’61 though his ERA was much better. Then in ’72 he was on a tear, putting up probably his best numbers ever – he was on a path to a 21-4 season – when he broke his wrist sliding back to first base on July 2, ending his season. In ’73 he started off a bit handicapped still from the injury with an ERA a run over his career average. In six mid-year starts he gave up 40 hits and 27 earned runs and was then placed on waivers, although many thought the true reason for that move was to jettison his $60,000 salary. The Sox bought him for $25,000 so miserly owner Calvin Griffith must have been tickled pink at his new $85,000.

After his strong run to end the ’73 season, Kaat worked with Sain, who had previously coached him in Minnesota, on reviving his screwball and his mechanics. Something certainly clicked because in ’74 Jim went 21-13 with a 2.92 ERA and in ’75 was 20-14 with a 3.11 ERA and was an All-Star. After that season, fresh off a sale of the team to Bill Veeck, Jim was sent to the Phillies with Mike Buskey for Alan Bannister, Dick Ruthven, and Roy Thomas as the Sox began their youth movement. For the Phillies Jim didn’t quite match his ChiSox years, but he went 27-30 in the rotation the next three-plus years and gave them a quality start in the ’76 playoffs. In May of ’79 he went to the Yankees in a sale to help shore up their beleaguered bullpen and got a couple wins and a couple saves the rest of the way. In late April the following year he moved to his last stop, St. Louis, where he finished out the season as a swing guy. From then on it was all relief: he went 6-6 with a 3.40 ERA with four saves in ’81 and 5-3 in 62 games with a couple saves in ’82. That year he finally got to be on a Series champ at age 43 and got into four Series appearances during which he pitched pretty well. After the ’83 season he was done, finishing with a record of 283-237, a 3.45 ERA, 180 complete games, 31 shutouts, and 18 saves. He hit .185 with 16 homers and 106 RBI’s. In the post-season he went 1-3 with a 4.01 ERA in nine games and hit .222. He is pretty much on the cusp as a HOF guy and could get there via a veterans vote in the next couple years.

Kaat turned to coaching after he finished playing, in ’84 and ’85 working with Pete Rose in Cincinnati. Then he turned to his next true career path: broadcasting. He worked for various stations, mostly associated with the Yankees, from ’86 to ’87 and then from ’88 to ’93 did color for the Twins. In ’94 he returned to NY where he was a regular broadcaster through 2006 when his initial plan was to retire. But he got dragged back in – mostly at the behest of friends who thought he’d be happier working after his wife passed away in ’08 – and currently does color for the MLB Network. 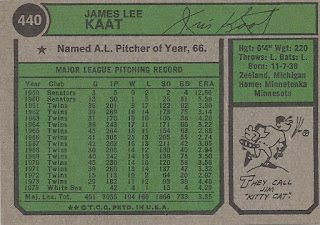 Star bullets don’t get much better than that one.

John Bateman was a starting catcher with the Colt .45’s/Astros in the Sixties who had some occasional pop: 17 homers in ’66, his best offensive season. In ’69 he got drafted by the Expos and was one of their first starting catchers, retaining that job through ’71. He spent his last season with the Phillies.
Posted by wobs at 11:59 PM