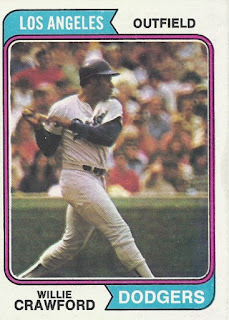 It’s 2013 and this set is officially 39 years old and to kick off the new year we return to the regular player cards and get thrown a bone with an action shot. It’s a pretty blurry one of Willie Crawford, but that may just be my card. It’s also tough to pinpoint the stadium and my guess is it’s either Philadelphia (strong) or Shea (not so strong) because that’s where other Dodger action cards were shot. It’s also tough to get a handle on this swing’s result since Willie looks pretty casual and may have missed the pitch entirely or may even be taking a cut in the on deck circle. Ah, for the absolutes of those Series shots. But one absolute here, for sure, is that Willie is smack dab in the midst of one of his best seasons, one in which he set personal bests in just about every major hitting category as he finally took over right field for real, put up a nearly-.400 OBA, and got rewarded with a “10” card. He’d been seeking that spot for almost ten years, even though he was probably only 26 when this shot was taken. He had a torrid May, hitting above .400 to finish the month at .321 when pretty much the whole line-up was hitting over .300. Willie would then hold onto his position for a couple seasons, more-or-less, although he could never completely escape the LA platoon system. Once he finally did, his career ended pretty quickly which would unfortunately be a barometer for things down the road. But right here he looks pretty good, every bit the bonus baby he was a decade ago.

Willie Crawford was born and raised in LA where he attended Fremont High School and roamed its diamond with future MLB guys Bobby Tolan and Bob Watson. Like just about every other black kid from the area with serious skills, he also played for Chet Brewer’s team in the summer. And he was a track star: a 9.7 burner in the 100-yard dash and a 25-foot long jumper. When he was a senior he was wooed by every MLB team, especially Kansas City, whose owner Charlie O Finley got Willie a tux and a limo for his prom and offered him a fat bonus, including about $300 cash he gave Willie on prom night. But the poor kid didn’t live in a neighborhood in which it was too wise to carry that kind of bankroll so he hid it in his shoe and then nearly pulled a hamstring trying to dance with it there. In the end Willie and his dad were put off by Finley’s aggressiveness and instead signed with the more reserved scout the Dodgers sent, a guy named Tommy Lasorda (I guess “reserved” is relative) for a pretty big stake. That was in ’64, the final non-draft year, and that meant Willie, who was all of 17, would have to spend at least some time up top. But first he played some A ball where he hit .326 and showed off his wheels. He then spent all of ’65 on the LA roster where he of course barely played but got some Series work with a hit in his two at bats. After the season he played in the Instructional League where he hit .317 in 35 games. In ’66 he went to Double A where his average sank to .265 as he struck out a pretty amazing 186 times in just over 500 at bats. Pretty scary, but his power numbers upticked pretty good. In ’67 he did IL work again and between that and his Double A time put up better numbers: 14 triples, 25 homers, 94 RBI’s, 21 steals, and a .293 average despite another pretty high – but better - K mark of 150. After hitting .295 with nine triples back in the top of the line-up in just over half a Triple A season in ’68 he returned to LA for good.

In 1968 the Dodgers, though just two seasons from a Series appearance, were not doing terribly well. There was no regular player at three-quarters of the infield and there was zero power in the outfield. So when Crawford put up his pretty pedestrian numbers – although those 64 strikeouts must have been a bit scary – people were generally excited. So in ’69 he became the fourth outfielder, putting in a bit more time at each corner than in center. His offense improved for most stats but his K’s stayed awfully high – 85 – even though most guys on the team enjoyed better numbers after the mound was lowered. In ’70 he lost a bit of time to young guys Bill Russell and Von Joshua, but not the K’s as he put up 88 in nearly 100 less at bats. Then in ’71 after a lousy start something good happened: Willie’s average climbed almost 50 points and his doubles doubled as his strikeouts came down by half. According to some accounts Willie was helped with his hitting by none other than Dick Allen, who stopped in LA for that season. In ’72 a hot start to the season power-wise was arrested by a cold spring and summer and by the end of July Willie was hitting near Mendoza levels. A hot late August and September pulled his average back 25 points and he was rewarded with the spot in right field vacated when Frank Robinson went to California.

In 1974 Willie had a season very comparable to ’73: same average, same power, and nearly the same OBA. He got to enjoy his first playoff run in nearly ten years and got some post-season work as LA juggled five guys in the outfield. In ’75 LA was beset by injuries and Willie wasn’t immune as he was hit with a twisted ankle early on that hindered his numbers a bit though it was the only season in which his walks topped his strikeouts. He was also back to being platooned, now with Joe Ferguson and John Hale, and that didn’t make him too happy so he asked to be traded. He got his wish in spring training of ’76 when he went to St. Louis for Ted Sizemore. With the Cards he took over right field most of the time and hit .304, his highest average for a season. After that year Willie was part of a deal that sent him, Vic Harris, and John Curtis to the Giants for John D’Acquisto, Mike Caldwell, and Dave Rader and it was a San Francisco uniform into which he was air-brushed on his ’77 card. But he never played for them since right before that season he was sent to Houston with Rob Sperring for Rob Andrews. For the Astros he played about half the team’s games in left and in June went to Oakland for Dennis Walling. With the A’s Willie played right and DH’d a bit but his average fell a bunch to .184. Unsigned for the season, Oakland let him go after it, and Willie spent most of spring training back in LA’s camp but didn’t make the cut. That was it for him and he finished with a .268 average with 86 homers, 419 RBI’s, and a .349 OBA. He hit .333 with a homer and two RBI’s in seven post-season games.

In ’78 and ’79 Crawford played ball in Mexico and when the Seventies ended so did his career. He returned to southern California, specifically Beverly Hills. There, his wife Dee became a high-end real estate agent and his son, Willie Jr., a local high school football star at running back and linebacker. Willie Jr. was a big deal recruit in ’88 and ended up going to UCLA but before he played a game ran into some troubles with assault and various other charges and never played for the school. Our Willie, whose profession since he played seems to have gone unrecorded, remained in the area – his wife is still at the real estate game – where in 2004 he passed away, apparently from kidney failure. He was only 57. 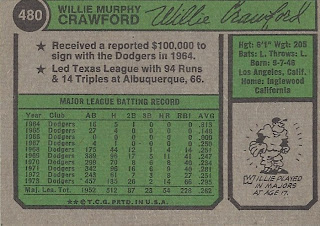 There’s Willie’s big bonus and the props for that ’66 Double A season. As for the cartoon, Willie was 17 when he signed but was 18 by the time of his debut in mid-September.

On September 9, 1965, right before the team’s last big push to the pennant – shortly later they’d win 15 of 16 – the Dodgers were given a perfect game by their ace, Sandy Koufax. And Sandy pretty much had to be perfect because Cubs pitcher Bob Hendley only gave up one hit and one walk himself. The only run of the game was scored without the benefit of a hit: Lou Johnson walked, was sacrificed to second by Ron Fairly, stole third, and then came home when catcher Chris Krug’s throw to Ron Santo sailed into left field. Johnson also had the only hit that day, a double in the seventh that ironically barely cleared the infield. He was the only guy to safely reach base the whole game. Koufax gave up one scary shot, a fly to deep center by Byron Browne in the second. There were only two half-innings that didn’t go 1-2-3. And Sandy got stronger as the game went along, striking out the side in the eighth and ninth innings. He ended with 14 K’s to get his 22nd win and would finish the year 26-8 with a 2.04 ERA and 382 strikeouts to win the Cy. It was his second-to-last season and he was only 29. It was this game that LA offered as its choice for the ’76 baseball centennial.

The Dodgers of course beat the Twins in that ’65 Series and we have to hook up Willie to a Twin now: