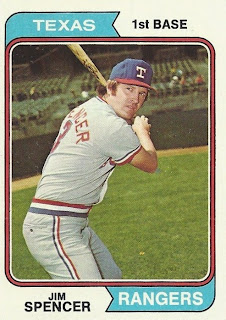 On this card we get a first-time All Star in what is his most frequently-used card pose. Jim Spencer hit nearly .300 the first few months after his trade to Texas from California and provided his usual excellent defense at first to get the All-Star nod in ’73. Other than that it wasn’t a crazy memorable season for him as he’d hit better in the past, especially power-wise. He’d come over from Anaheim in a pretty big deal involving pitchers and first baseman: he and Lloyd Allen for Mike Epstein, Rich Hand, and Rick Stelmaszek (who was actually a catcher). Once Jim arrived he more-or-less took over first base for the Rangers, sharing some starting time with fun guy Bill Sudakis. Jim would also put in some time at DH during his stay with the Rangers since in another year he would be joined by Rookie of the Year Mike Hargrove at the position. Jim wasn’t a big fan of being platooned – who was? – but he generally did good work in that role and wouldn’t stop with the Rangers. But for now he is residing in Texas – the photo appears to have been shot in Oakland – and on a Topps honor card which was not a bad place to be.

Jim Spencer was born in Pennsylvania and by the time he hit high school was residing not too far from Annapolis, Maryland. At Andover High he was named All-American in basketball and baseball, being both a pitcher and first baseman in the latter sport and tapping the ball at a .407 clip during his high school career. A first round draft choice by the Angels upon graduating in ’65 he hit a light .223 in A ball that summer. In ’66 he moved up to Double A where his stat lines improved pretty markedly over the next three seasons: .264/16/53 in ’66; .279/19/72 in ’67; and .292/28/96 in ’68 when he won his league’s mvp and made his debut for California in September. He moved to Triple A Hawaii to open the ’69 season and hit .262 in 47 games before being pulled up to Anaheim for good.

In ’69 the Angels brought old Dr. Strangeglove, Dick Stuart, back from Japan to play first base but that didn’t go so well as the Doctor couldn’t break .200 his first month of at bats. So California brought up Spencer to take over the position and while his numbers weren’t super great, they were a significant improvement over Stuart, both offensively and defensively. In ’70 Jim took over the position for real, providing some good offense and winning his first Gold Glove as he led AL first baseman in putouts, double plays, and fielding percentage. He would lead the league in that last category four years in a row. In ’71 he also topped the AL in putouts and assists, topped his previous highs in doubles and homers, and saw his average fade a bit as the other offensive threats in the lineup pretty much disappeared. In ’72 Jim kicked off the season with a low average and shortly into it the Angels picked up Bob Oliver who vied with Jim for starting time at first and then pretty much won the position outright. So Jim’s at bats declined and he finished the season as a left fielder.

In ’74 new kid Mike Hargrove arrived to press Spencer for time at first and while Jim would put up nearly the same exact offensive numbers as he did in ’73 for Texas – a few more homers, a few less walks – he did it partly from a different place, DH. It was the first year in the last five he didn’t lead the AL in fielding percentage but that was just because he didn’t get enough chances. In ’75 Texas had a sort of messy time replicating the team's ’74 success and a dearth of outfield offense got Hargrove moved out there for a significant part of the season. That meant that Jim got to do nearly all his time at first that year and his .266/11/47 season wasn’t terribly dissimilar to his prior ones. After the season he went back to California for pitcher Bill Singer and the next day was flipped to the White Sox with outfielder Morris Nettles for pitcher Steve Dunning and infielder Bill Melton. With the Sox Jim amped up his power a bit, the next two years averaging 16 homers and 70 RBI’s while getting the lion’s share of first base time that otherwise went to Lamar Johnson. In ’77 he won his second Gold Glove even though he was injured nearly a month, mostly from a foot ailment. After that season Jim went to the Yankees in a trade that was otherwise populated by minor leaguers.

Spencer arrived in NY in a good year for drama. It was the season of the big comeback from 15 behind but Jim saw a significant part of it from the bench. Chris Chambliss was the first baseman and he rarely sat so nearly all of Jim’s appearances were as a DH and it wasn’t a terribly productive season as he hit .227 in 150 at bats, his lowest amount of plate time since ’68. But his RBI total of 24 was pretty good for him and he did get some action in that year’s Series. Then in ’79 as most of the team was having an offensive meltdown, Jim put up probably his best season in the same roles, with a line of .288/23/53 in only 295 at bats. The next season Chambliss left for Atlanta and while Jim’s at bats – and his offense - came in a bit he got to enjoy most of them at his normal position, where he split time with Bob Watson. After putting up a .236/13/43 season in 259 at bats and complained about his being platooned, just before the ’81 season began Jim and a bucket of cash was sent to Pittsburgh for Jason Thompson, a power-hitting younger first baseman. But the deal was nixed by the commissioner’s office – too much cash – and Jim again put in some games at first before he was traded in May to Oakland. There he spent the next season-plus as a back-up first baseman, again seeing some post-season action that first year. It would be his final stop as a player and he would retire following the ’82 season with a .250 average with 146 homers and 599 RBI’s. In the post-season he hit .150 in eight games. Defensively his .995 fielding average at first is in the top 25 all-time and he is in the top 100 in assists at that position.

Spencer returned to the Yankees as a scout after he played which he sandwiched around a few years as a coach for The Naval Academy which began in ’86. He was still doing some work for NY when he passed away from a heart attack in 2002 at only 54. There’s been a bit of a streak going recently of former players passing away at relatively young ages. I sure hope that ends soon. 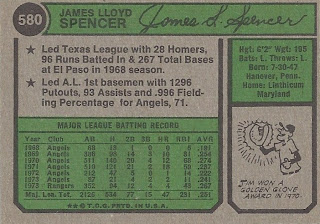 Jim has some nice penmanship and Topps gives him props for his big ’68 season and some defensive work in a year he didn’t win a Gold Glove. His grandfather, Ben Spencer, was an outfielder on the 1913 Senators.

Two former Yankees are years apart in their time with the team, but that should help anyway: