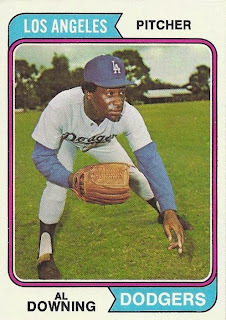 This guy is the first black Yankees starting pitcher, which is crazy since he was still active at the time of this set. The Yankees were pretty slow to embrace the whole Jackie Robinson thing that was going on across town and was one of the last to integrate their team, pretty surprising given the stars the two other NY teams picked up once that went down. Al Downing was a big power pitcher when he came up with NY and at the time of this card he was pretty much moving from a starting role to a relief one that would take him to the end of his career in LA. It was very likely that by the time this card came out Al had given up Hank Aaron’s 715th homer which would help to immortalize him – Al – for a while in not a great way. But he was a lot more than a one trick guy anyway. Here he shows his follow through at a very lush spring training site.

Al Downing grew up playing baseball in Trenton, NJ, where as a teenager he helped take his Babe Ruth team to a national championship. After high school he helped establish a local PAL team that won a state championship and did some national touring. He also attended Rider College at that time and after his first year there, late in 1960, he was signed by the Yankees. He pitched well in A ball the following summer, going 9-1 with a 1.84 ERA in twelve starts and earned a call-up to NY that July, just after his 20th birthday. He didn’t pitch terribly much, though, and in ’62 he spent the season in Triple A were he worked out some control issues while going 9-13 with a 4.10 ERA and 180 strikeouts in 169 innings. He tossed a no-hitter that year. In ’63 a strong start at that level – 3-2 with a 2.68 ERA and 64 K’s (with 45 walks) in 57 innings – got him promoted to The Bronx for good. He had a pretty excellent rookie year, leading the AL both in least amounts of hits and most strikeouts per nine innings and made his Series debut in the loss to the Dodgers. In ’64 Al pulled a Nolan Ryan by leading the AL in both walks and strikeouts and recorded a couple saves in his only two relief appearances. In ’65 and ’66 he pitched well for a couple teams in fast decline mode, but his K totals were waning a bit as he was beginning to have shoulder and elbow soreness. He then posted his best NY season in ’67 as he made the All-Star team, put up four shutouts, and recorded his best wins and season-long ERA as a Yankee. But things got tough early in ’68 when he began having severe elbow issues, missed a bunch of games, and did some rehab work in the minors. A visit during the season to the Mayo Clinic resulted in an odd diagnosis: Al suffered from narcolepsy – he had always had trouble sleeping at night and keeping awake in the afternoon – and when he fell asleep in odd positions it was nearly always on his left elbow. It was from this point on that he stopped being a power pitcher and became a control guy, specializing in a curve and a change-up. In ’69 he was able to put in a full season as a spot guy, getting 15 starts in his 30 games. After the season he was sent to Oakland for first baseman Danny Cater.

Downing’s first year away from NY wasn’t exactly rosy. Still dealing with arm issues, his walks and ERA were a bit fat and in May he was on the move again, this time to Milwaukee with Tito Francona for Steve Hovley, an outfielder who received considerable coverage in “Ball Four.” With the Brewers, Al’s ERA was impressive but the walks stayed high and the resulting record was pretty ugly. He then hit the road again, moving to LA for outfielder Andy Kosco. Good trade for the Dodgers as Al put together his best season as he led the NL in shutouts and his off-speed stuff took him to 20 wins, third place in the NL Cy Young voting, and his league’s Comeback Player of the Year. He remained in the rotation the next two seasons, became a spot guy in ’74 and ’75, and closed things out with two more years of long relief work, finishing in ’77 with a 123-107 record, 3.22 ERA, 73 complete games, 24 shutouts, and three saves. In the post-season he was 0-3 with a 4.87 ERA in six games.

Downing remained in the LA area and the Dodger family for a considerable time after he played. He became a radio and television broadcaster, most of the time for the Dodgers. From ’78 to ’91 he broadcast either radio or cable games for the team. He then spent three years hosting DodgerTalk on KABC Radio before hooking up with CBS to do games nationally from ’94 to ‘97. He returned to do radio work for a couple years before announcing for the Braves in 2000. Than it was back to LA, initially to take over a post-game show while the regular announcer, Ross Porter, recovered from sinus surgery. Al then did some radio show work until he returned to color work in 2005 and then retired from announcing in 2006. Since then he has remained affiliated as part of the LA speakers bureau and he has done a bunch of community and baseball camp work. 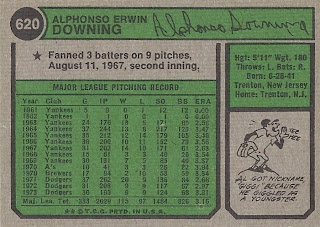 Al’s signature sort of falls apart at the end there, doesn’t it? The game referred to in the star bullet was against Cleveland and was a complete game win in which he struck out twelve batters. Al had a 1-2-3 inning in the first as well so the three batters he struck out – Tony Horton, Don Demeter, and Duke Sims – were the heart of the Indians’ order.

All that April Watergate stuff noted in the past few posts led up to this:

4/30/73 – H.R. Haldeman, John Erlichman, and Richard Kleindienst resigned from their positions on the White House staff and John Dean was fired. President Nixon made these announcements while declaring himself to be responsible for any Watergate activity that emanated from the White House and indicating that nobody was above the law, though later actions would pretty much repudiate his thoughts on both of those statements. Nixon gave both Erlichman and Haldeman sterling reviews for their actions while on his staff and, as Dean had predicted earlier, basically through Dean under the bus. Elliott Richardson, who was the Secretary of Defense, was named to fill Kleindienst’s spot as Attorney General and was immediately charged with finding “the whole truth” about Watergate. Leonard Garment was chosen to replace Dean as Special Counsel to the President. Gordon Strachan also resigned as Special Counsel to the United States Information Agency; Strachan had been Haldeman’s assistant during Nixon’s first term. These resignations came immediately after some other high-profile ones in recent days: Jeb Stuart Magruder as deputy campaign director of CREEP; Dwight Chapin as presidential appointments secretary; and Chuck Colson, another Special Counsel to the President. Colson was probably the most interesting character amongst the resignees. He was heavily involved in lobbying interests, both those initiated and received from various constituencies in the White House. Privately, he was known as Nixon’s “hit man”, and would both author and become heavily involved in campaigns to discredit or harm – sometimes physically – deemed White House opponents (John Kerry was an early target).

Back in baseball, a HOF cusp guy gets us the hook-up: