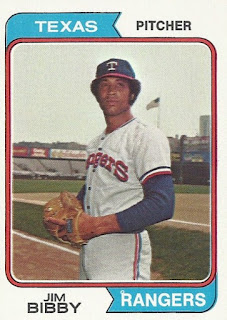 This is Jim Bibby's first non-rookie card. His rookie card was in the '72 set with him as a Cardinal. '73 was his first full season in the majors; Bibby was 28 years old, so it took him a while to get there. And while '73 got off to a lousy start with St. Louis, a trade to Texas - of all places - did a world of good for Jim as he became ace of the staff, outdueled Nolan Ryan in a big start, and threw a no-hitter. Pretty big deals for a rookie, now matter how old. Here Jim looks enormous at Yankee Stadium, which is fitting since he was about one of the biggest guys in MLB in his day.

Jim Bibby grew up with a couple siblings in North Carolina on a farm in a tiny town. He followed his older bother to Fayetteville State where he played baseball and hoops. The summer after his sophomore year he went to a local tryout hosted by the Mets and a bit later was signed. After a poor season in Rookie ball - too many walks - he was drafted into the military for two years; he served in Viet Nam the first one and the second one played hoops on a stateside base. He got back to baseball in '68 and exhibited much better control in A ball that summer before in '69 throwing some good ball in both Double A and Triple A. But in spring training of '70 he suffered a nasty back injury and was lost for the season. But judging from his '71 numbers in Triple A he made a complete recovery. After that season, though, he went to St. Louis with Charlie Hudson - a pitcher he would replace in Texas - Rich Folkers, and Art Shamsky for Chuck Taylor, Harry Parker, Jim Beauchamp, and Chip Coulter. Jim kicked things off for the Cards with a nice year in Triple A and then a September call-up to St. Louis where he thre well in a few starts but had a losing record. After not throwing too much the first half of '73 he came to the Rangers in early June for Mike Nagy and John Wockenfuss.

When Bibby was acquired by Texas the team was managed by Whitey Herzog who'd previously been in the Mets system and was the driver for the deal. But Whitey was gone by the end of the season and Jim got a new manager in Billy Martin, who was also a fan. So in '74 Jim became one of the staff workhorses, getting 41 starts and getting a decision in nearly all of them as he went 19-19 with a 4.74 ERA. Jim could still be a bit wild and he put a lot of guys on base and in '75 that would catch up with him as he began the season 2-5 with a 5.00 ERA. That June he, Jackie Brown, Rick Waits, and some cash went to Cleveland for the disgruntled Gaylord Perry.

Bibby's ERA increased markedly in his new home, falling to 3.20 the rest of the way. But pitching for The Tribe back then wasn't exactly a salve for losing and he went 5-9 with a save in a swing role. But over the next two seasons he would go a combined 25-20 with a 3.40 ERA as he was able to corral his wildness a bit. But Cleveland always had money issues back then and when the team missed getting Jim a promised bonus check, he opted for free agency and signed with the Pirates.

Pittsburgh was at the tail-end of  a three-year run finishing second to the Phillies in the NL East and was a pitcher away from returning to the post-season. If Jim wasn't that guy, he sure didn't hurt and the next couple seasons he would do nice work in his swing role. In '78 he went 8-7 with a 3.53 ERA and a save and in the Series year of '79 he upped his numbers to 12-4/2.81 and followed it up with some excellent post-season pitching. Jim maintained that roll in '80 when he returned full-time to the rotation and went 19-6/3.32 to earn his only All-Star nod. In both '79 and '80 he led the NL in winning percentage. Then in '81 he was going great guns in the same role - he finished 6-3/2.50 - when he hurt his shoulder and only pitched in a few games after the strike. It turned out he had bone chips and a torn rotator cuff and required surgery, which knocked him out for the entire '82 season. When he returned, he wasn't the same pitcher and an ugly '83 was followed by  a return to free agency during which Jim retraced his steps to first Texas and then St. Louis, though he wouldn't pitch too effectively for either team. Done in '84 Jim finished with a record of 111-101 with a 3.76 ERA, 56 complete games, 19 shutouts, and eight saves. In the post-season he got no decisions in his three starts but put up a 2.08 ERA in 17 innings while walking only six and striking out 15.

Bibby got into coaching immediately and in '84 started with the Durham Bulls. He then worked for a long time in systems for the Mets ('85-'87), Red Sox ('88-'94), and Pittsburgh ('95-2000). Nearly all that time was spent in Lynchbugh, Virginia, Jim's post-pitching home. He had double knee replacement surgery following the 2000 season and retired. He'd put in a season of Senior League ball in '89 and after done coaching played a lot of golf. He passed away earlier this year after a battle with bone cancer. He was 65.. 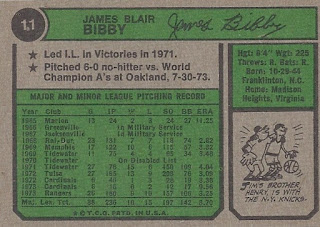 The back of Jim's card cites his '73 no-hitter. He was given a $5,000 check right after the game by the Texas owner. The cartoon mentions his younger brother Henry, who was a reserve on the championship '73 Knicks and the father of Mike Bibby, current NBA point guard. Jim has a well-written bio on the SABR site.

For degrees of separation, we are back to the short list: