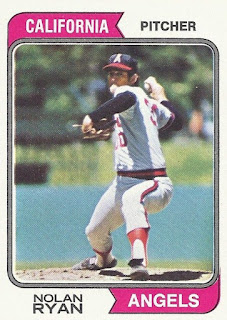 The 20th card is a classic Nolan Ryan action shot. Ryan had a very linear delivery with no wasted motion. Every body part - right thigh, left foot, left elbow - is pointed directly at the plate. His intensity is pretty gripping as he gets set to hurl another 100 mph fastball. I know there are lots of complaints out there about the '70's action shots and this one is a little blurry, but it sure does catch the essence of Ryan as a pitcher.

1973 may have been Ryan's best season. It was the first of his two 20-win seasons, his ERA was below 3.00, and it was the year he broke Sandy Koufax' strikeout record. He also threw two no-hitters. He was so overwhelming in the second one against Detroit that Norm Cash came to the plate with a piano leg. This shot appears to be taken in Baltimore. Nolan pitched twice there in '73 and my hunch is this is the earlier game, on May 6, in which he threw against Jim Palmer who will also have an action shot at Memorial Coliseum. As the baseball gods at Topps were wont to do in this set, Nolan's featured card is from a game he lost, if my assumption is correct. Topps liked to roll that way sometimes.

Nolan Ryan grew up in Alvin, Texas and threw enormous heat at a young age, so was followed by MLB scouts practically through high school. He went 19-3 his senior yesr with 211 strikeouts but when the local area scouts finally got the big guns down to Texas to check Nolan out, Ryan uncharacteristically had a tough time in a big game and interest waned. He was eventually taken in the twelfth round by the Mets in '65 and that summer while he whiffed a bunch of guys in rookie ball he had control issues and a losing record. That all got better in '66 when in A ball he went 17-2 with a 2.51 ERA and 272 K's in only 183 innings. When he threw three starts late in Double A that season he went 0-2 despite posting a 0.95 ERA and 35 strikeouts in 19 innings; his debut up top didn't go quite that well. In '67 Nolan did the lion's share of his military commitment and between A and Triple A ball only threw in four games, though he did well. But his rookie card in '68 had him paired with Jerry Koosman; I have to believe that their MLB win total of 546 is the highest ever represented on a rookie card.

While Ryan's rookie year of '68 wasn't quite as good as his card-mate's, it was still not too shabby. He joined the rotation, had a pretty good ERA, and tossed nearly a strikeout an inning. But Nolan had some issues with NY: the coaches barely spoke to him; when they did speak to him it was only to tell him to throw more heat so he didn't learn any new pitches; and he and his wife weren't big fans of the NYC lifestyle. He moved to a spot role for the Miracle Mets team of '69 and had a nice post-season for them that year, before putting up two good seasons back in the rotation which were marred mainly by increasing walk totals and mediocre records. So when after the '71 season Nolan was feeling like the red-haired stepchild, he asked out, and the Mets obliged. Nolan went to California with Leroy Stanton and Don Rose for Jim Fregosi, a trade regarded as one of the most lopsided of all time. What made the trade even worse was that the Angels actually didn't want Nolan at first; they insisted on Gary Gentry, which NY declined and kept pushing Ryan on them until California relented. Wow.

Ryan's career changed considerably in his new home, and every season Nolan was with the Angels except one - '75 in which he was hurt - he led the league in strikeouts. He would also be an All-Star for them five times. His first season there he learned a curve, which made his fastball that much more devastating. In '72 he led the AL with nine shutouts. In '74 he topped out with 22 wins and 333 innings. In '76 he again led the AL with seven shutouts, K'd 327, and had a very good ERA of  3.36 but had zero hitting support and led the AL in losses while going 17-18. After a '77 that mirrored '72, Nolan got nailed again with the injury bug. '78 included nearly 40 days on the DL and was sub-par; and in '79 after a 12-6/2.54 start got him named starting AL pitcher in the All-Star game, Nolan hurt his elbow and went only 4-8/5.59 the rest of the way. By then Nolan was 32 and California thought it wouldn't be so bad to let him go as a free agent. Ah, well.

Ryan went back home and signed with Houston and during his first few seasons with the Astros dialed down his strikeout ratio to less than one per inning, as well as his total innings and decisions. After a pedestrian first year Nolan put up a big season in the '81 strike year when he went 11-5 with an NL-leading 1.69 ERA. He went a combined 30-21 the next two years and then the two after that was sub-.500 but in the playoff year of '86 he went 12-8 and kicked the strikeouts back to above one per inning. In '87 he led the NL with a sick 270 in 212 innings and also led the league with a 2.76 ERA while going only 8-16 which is one of the most bizarre combination of stats I have ever seen. After an '88 in which he also led the NL in K's Nolan went free agent again, remaining in Texas, but switching leagues.

Ryan's ability to handle his finances pretty much matched his ability to throw strikeouts and after a couple years on the sidelines he returned to baseball, initially by coaching at TCU in the mid-Nineties while his sons were there. He then moved to the ownership and admin side in pro ball by purchasing a Double A franchise in '97 and a Triple A one in 2004, both of which he helped guide to very successful returns. In 2008 he was named president of the Rangers, a title he continues to hold. 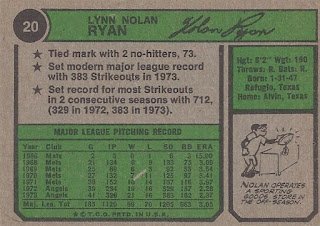 Lots of information about the 1973 season is found on the back of the card. The move to the AL certainly seems to have done Ryan a world of good, at least in those first two seasons. The cartoon is another one referencing the player's off-season activities.

Following the recent trend, a Yankee connects the two players:

I guess I am a bit Yankee-centric.
Posted by wobs at 6:53 AM