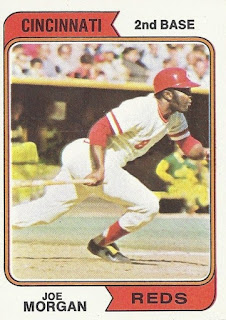 Well, this is weird. Joe Morgan in action against Oakland. As much as the baseball gods back then expected, this card was NOT from '73, but from '72 when these two teams did meet in the Series. Joe looks pretty intense here, like he's following a ball hit to left field and it's at Riverfront. So I am guessing it is the seventh inning of game six when he hit a single off Dave Hamilton, scoring Dave Concepcion. In '73 Joe was still running: another All-Star season included a big bump in homers, a .406 OBA, and a Gold Glove. Joe was in the midst of his most productive MLB time and though in that year's playoffs he wouldn't make too much noise against the Mets - a big reason Cincy went down that year - he would get his in a couple seasons.

As a Yankee, Red Sox (I know), and Phillies fan of the mid-70's Joe Morgan was a tough guy for me to like. But I had to respect the guy. From that perfectly erect batting stance and the cocking of his left arm to all those runs and walks and stolen bases, the guy was as complete a player as you got in his prime. He was a very serious guy as a player; in the book on the Reds excerpted last year in SI it said that when Morgan came to the Reds management deliberately put his locker next to Rose's so that Pete could pull Joe out of his shell and so that some of Joe's studiousness would rub off on Pete. I guess it worked. But after Morgan's response to "Moneyball" when it came out I realized why so many people thought he was a jerk. Every time he opened his mouth about that book he sounded foolish. I never got that: the type of player Billy Beane adored as described in the book was every inch a Joe Morgan-type player. Everything about the book idealized the player Morgan was so why he took such offense to the book's existence was beyond me. Anyway...

Joe Morgan grew up in Oakland, was signed by the Colt .45s in '62 and immediately indicated the type of player he would be during his two minor seasons: a decent to high average, a very high OBA (.471 and .440 in A and Double A, respectively), very good power for a middle infielder, and good stolen base totals. He made short appearances in both '63 and '64. During those short seasons he showed some signs of trouble with major league pitching. Nellie Fox, a player-coach for the .45's at the time, told Joe his back elbow would drop during his at bats and suggested he wiggle it while awaiting the pitch to remind him to not drop it. So that is from where the elbow-cocking came. In '65 Joe replaced Nellie at second and had a bang-up first year, leading the league in walks and finishing second in ROY to Jim Lefebvre. In '66 he had better full-season numbers but his playing time decreased due to a broken kneecap. He did get his first All-Star nod that year and was the first starting Colt .45/Astro ever named. Another very good season followed in '67 and then Joe hurt his knee again in '68 and missed pretty much the entire season. He came back in '69, putting up good numbers and upping his stolen base totals to the 40's. But over the next three seasons - one of which was an All-Star one - his average slipped to about 20 points less than it had been before he got hurt - his OBA stayed about the same - and he was viewed with his roommate Jimmy Wynn as a troublemaker by Harry Walker, his manager. Those plus the desire for a power-hitting first baseman prompted Houston to make what is considered one of the worst trades ever: Joe, Dennis Menke, Cesar Geronimo, Jack Billingham, and Ed Armbrister to the Reds for Lee May, Tommy Helms, and Jimmy Stewart. 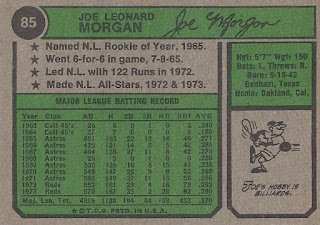 This is another card that could have a wealth of star bullets. That first one is odd - maybe Topps named their own guy? or TSN? - since it wasn't even close in that year's voting (Lefebvre was on a Series winner which is probably why he won). Anyway, it's wrong. Maybe the trips to the pool hall got him in dutch with Harry.

This will require more steps than I thought it would. These guys opposed each other in the '75 Series: