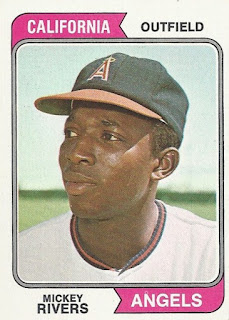 This is the first post that I have been somewhat intimidated by because Mick here was one of the guys that revitalized the Yankees and if you were around in the late 60s and early 70s for those guys, then he is due a certain amount of reverence. And his performance in '73 sure built a nice foundation for that. After a big Triple A year, Mick came up top in September to take over center field and continued his hitting magic the rest of the way. Between the two teams he got nearly 800 plate appearances. That said, this is the first Rivers card that I think captures his public personality: the slow-moving, fast-running, good-fielding, weak-armed, horse-loving, malaprop-inventing center fielder that shared a name with a famous guy he probably never heard of. In fact he looks like he might be thinking about the answer he would give someone asking about his expectations for the coming season: "Hit .300, score 100 runs, and stay injury-prone."

Mick the Quick Rivers was drafted - and signed - by the Braves out of Miami-Dade Community College in the summer of '69. He had previously been drafted by the White Sox, Mets, and Senators the previous 18 months but shot them all down for school where he hit a combined .362 his two seasons. After a half season in the Rookie League in which he hit .307 he was sent to the Angels for Hoyt Wilhelm, the knuckleballing reliever. For the next four seasons, he hit no less than .322 in the minors, piling up hits, triples, and runs. He lost some time in '72 to military reserve duty and also popped up to the majors each season. While his speed was apparent, his outfield inadequacies and problems with righty curveballers - he was a lefty - kept him from garnering a full-time position. That finally got fixed in September of '73.

Rivers joined the starting Angel lineup full-time in '74 and led the AL in triples that season. In '75 he again led the league in three-baggers as well as with 70 stolen bases, which was the biggest seasonal total in the AL since Ty Cobb played. Both years he hit in the mid-.280s. He then went to NY with pitcher Ed Figueroa for Bobby Bonds. Mick replaced Bonds in center, providing less power but also way less strikeouts. His first three seasons there NY won three pennants. '76 and '77 were his best seasons: a .312 average, 95 runs, his only All-Star appearance, and third place in MVP voting in '76; a .326 average, 12 homers, 69 RBIs, and 11th place in MVP voting in '77. The one consistent knock on Mick was that he didn't walk - he didn't strike out that much either - and in '77 he was replaced at the top of the lineup by Willie Randolph, who had a much higher OBA. In '78 Mick's average took a hit, the Yanks were way out of the race by mid-summer, and his enjoyment of the racetrack got to be an issue. But the Yanks had the big comeback as  his average revived, the team won another Series, and besides, "[he] and Reggie and George were two of a kind." In '79 Mick's average recovered to close to .300 but the team's poor performance and continued issues with the track forced the Yanks to trade him to a more benign place, that being - ironically - Texas. He went to the Rangers for, primarily, Oscar Gamble. There he pulled his average up 13 points and the next year set a club record for hits with 210 while hitting .333, his highest average in the majors. He got hurt in '82 and spent '83 and '84 as a semi-regular. Although he hit .300 in '84 it was his last season. For his career, Mick hit .295 with 267 stolen bases. In the post season he hit .308 in 29 games. And though he was constantly criticized for his defense. Mick's speed allowed him to reside in the top 75 all-time in all major defensive categories in center. And there were lots of great quotes. One more (when explaining how to play center field to a group of kids): "the first thing you want to do is wet your finger, hold it up, and check the windshield factor."

Sparky Lyle was not a fan of Mick in his book "The Bronx Zoo" and in it Rivers comes across as a bit of a malcontent. I also read somewhere that when he played center field at Yankee Stadium, he would always ask the guys in the bullpen how a horse he had bet on did in a race. If it won, he would be a demon in the field; if it lost, he would not hustle at all. Once the bullpen guys realized that, they always told him his horse won. But all that just made him more interesting.

After baseball, Mick worked some with horses - of course - played Senior baseball, and did some local work in the parks and with kids back in FLA to which he relocated. He has an "official" website here that showcases his bio and a bunch of his quotes. He also has recently started working with the Yanks again as a spring training coach and there are a couple interviews from '09 on the web. He looks good. 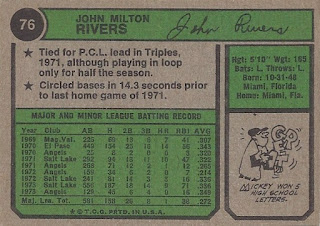 John Milton was of course the guy that wrote "Paradise Lost." Rivers was not named for him but for some relatives. I had not known that he ever signed with his real first name before I saw it on this card. The triple A numbers make you wonder why he wasn't given more of a shot in the majors: back then the Angels weren't exactly awash in All-Stars out there. That second star bullet was slower by a second to the record. If I remember correctly, I think Ken Griffey Sr. ultimately broke it.

We have had quite a run of AL cards now so this is easy:

Happy to throw an ex-Red Sox in there since they have been woefully under-represented so far in this set.
Posted by wobs at 7:36 AM