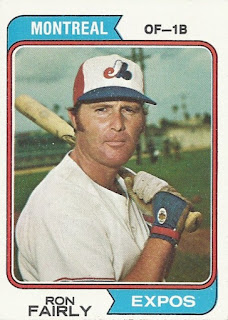 Now Ron Fairly gets to pose in that weird compound that Ken Singleton was in many posts ago. Ron is smack in the middle of a genuine part of the field however. And he looks calm enough despite what appear to be a bunch of paratroopers milling around in the background. I guess he'd seen it all by then. Ron was about to embark on a pretty good season in '73, posting one of his best averages while putting up a .422 OBA and grabbing his first All-Star nod.

Ron Fairly was a Georgia kid who played at USC where in '58 he was one of the Trojan leaders of the CWS champs. He was signed that year by the Dodgers and put in some brief stops at Single and Triple A levels before getting some outfield time in LA at the end of the season. He stayed up for all of '59 getting enough at bats as a mostly defensive replacement to make the Topps Rookie All-Star team that year. In '60 the outfield was pretty crowded and Ron spent the season at Triple A Spokane where he hit .303 with 27 homers and 100 RBIs, as well as a .418 OBA. In '61 Duke Snider got hurt, allowing Ron to get back in the outfield. Also, due to Gil Hodges aging out, first base was made ready for big Frank Howard. But Ron stole the position by hitting .322 with 48 RBIs in about half a season. He would serve at first the next couple seasons as the transition guy between Hodges and Wes Parker. He was a very good fielder, particularly at covering bunts, and was adept at getting on base. He also knew the rules and during the pennant drive of '63 he saved a win by getting a Joe Adcock homer called back. In '65 Parker came up and Ron moved to the outfield, replacing Tommy Davis. His best position was right field since although he had a good arm, he was notoriously slow. He would be a consistent hitter and in '65 would have a great Series, tagging Twins pitchers for a .379 average with a couple homers and six RBIs. In '67 and '68 Ron's numbers came in as LA sunk fast and after a month-plus in '69 he and Paul Popovich were traded to Montreal for Maury Wills and Manny Mota.

For the Expos, Fairly would have a bit of a resurgence, playing primarily first base again through '71, and his full-season numbers would match his best during his Dodgers days. After Mike Jorgensen arrived in '72 Ron would also play a bunch in the outfield. In '73 Ron moved to the top of the order so his RBI numbers came in a bit. In '74 his numbers and playing time decreased and in '75 he went to the Cards for a couple minor leaguers. For St. Louis he again did the transitional thing as he was helpful in easing Keith Hernandez into the first baseman spot and Ron put up really nice numbers: a .301 average with 13 doubles, seven homers, and 37 RBIs in only 229 at bats. He also had an OBA of .421. In '76 He got less time as Keith established himself and late in the season he was sold to Oakland where he got some time at first and as a pinch hitter. For '77 he was basically sold to the new Toronto Blue Jays and there he set his high with 19 homers while playing first and the outfield along with DH-ing. He also made it into his second All-Star team. He is the only player to be an All-Star from both Canadian teams. For '78 he went to the Angels for Pat Kelly (NOT the one from this blog) where he did his first and DH thing, getting ten homers and 40 RBIs in under half a season. That was it for Ron as his dream to play in four decades didn't pan out. For his career he was a .264 hitter with 215 homers - he is the only player with over 200 homers lifetime without hitting 20 in a single season - and 1,044 RBIs. His OBA was .360 and he was a .300 hitter in the post-season.

Following his playing career Fairly jumped into broadcasting for the Angels ('79 to '86), San Francisco ('87 to '92), and the Mariners ('93 to 2006). He is also doing some color work this season for Seattle as part of a rotating group. 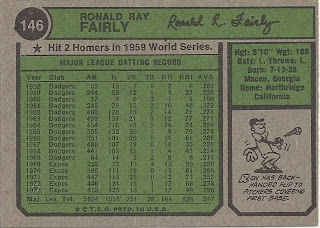 Ron's middle name is Ray but that looks like an L to me in his signature. Those two homers were actually hit in '65 (Ron went o-fer in '59). And his shovel throw was part of his bunt coverage at which he excelled. He also teamed well at Montreal with Rusty Staub defensively which is interesting because they were probably the two slowest guys in the league. When Ron played for the Blue Jays his manager was Roy Hartsfield, who was also his first manager in the minors.

Ron just misses connecting to Alston, for whom he played a bunch of years. Here, though, we hook him up to Dock Ellis. They missed each other by a year.