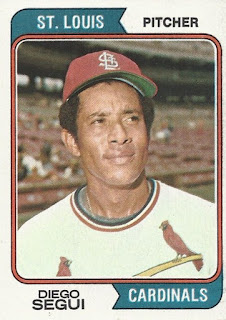 Diego Segui's two cards on this post look like they're taken a couple seconds apart at what appears to be Busch Stadium. I like how they put the pissed-off photo on the Traded card so we can see how well he took the news. Boston certainly wasn't a death sentence, but it was the beginning of the end for Diego's career. '73 was his last good season and during it, Diego would establish the full year club record in saves before the All-Star break. He had twelve by then. Pretty scary. No wonder poor Rick Wise got zero help from the bullpen while there.

Diego Segui took a tough route to the majors. He was born in Cuba where he played high-level ball and then in '58 was signed by the Reds, who brought him north and the promptly dropped him. While things in Cuba weren't out of control yet, they were a bit dicey and rather than try to return, Diego made his way to an independent team for whom he put up not great numbers that season. After it he was sold to the Kansas City A's. The next three years Diego worked his way through the KC system, perfecting his forkball, and having serviceable numbers as both a starter and reliever, but nothing fantastic. In '61 at Triple A Hawaii he went 5-10 with a 4.62 ERA, which didn't exactly demand his elevation. Still, like a lot of KC pitchers he could hit - 18 RBI's one year and a .286 average another - and his ability and willingness to both start and relieve as well as KC having nothing spectacular up top contributed to his coming up to the A's in '62. 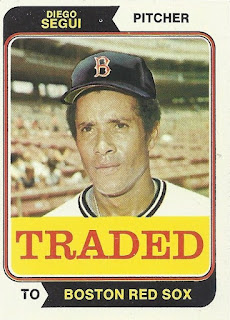 Segui's first two years were pretty good as he occupied a swing role and that first year put up six saves. Then in '64 he moved into the rotation but for the next two seasons he fell victim to his own and the A's poor numbers and went a combined 13-28. Before the '66 season he was sold to the Senators and about two-third's in he was traded back to KC, where he spent the rest of the season in Triple A, where his numbers improved, but not by much. In '67 Diego had an excellent start in Triple A, in seven starts, sporting a 1.29 ERA. Those numbers got him back to KC and for the balance of that year and the next, Diego hit his stride as a reliever for the A's. The first year he occupied a set-up role and in '68 he closed a lot more games, again adding six saves. Following '68 he was drafted by the expansion Pilots where he would have his best season, getting into a career-high 66 games and recording 12 saves to go with his 12-6 record. For '70 he went back to Oakland for run number three, essentially for Ted Kubiak. That year he led the AL in ERA, moving into the rotation during the second half of the season. Another year as a starter followed including a post-season start against Baltimore in '71. But just as Oakland was really getting things going in '72, Diego was traded to St. Louis. In the next year and a half he got in 98 games for the Cards as the closest thing those teams had to a closer and in '73 he set the team's saves record with 17 which would be broken a couple years later by his bullpen mate Al Hrabosky.

In '74 Diego threw 108 innings in relief for Boston, but his ERA shot up over a run and his saves total fell to ten. His '75 was not a very good season (2-5 with six saves and a 4.82 ERA), although he did get a bit more post-season action. He was released by the Sox just as the '76 season started and hooked up with Hawaii, the Padres' Triple A club. There he had a pretty good year (11-5 with a 3.18 ERA as a starter). For '77 he was bought by the new Seattle Mariners for whom he would be the starting pitcher in the team's first game, equaling that distinction with the old Pilots. He is the only guy to play for both teams. After a few winless starts he returned to the bullpen and was released at the end of the season. For his career, Diego was 92-111 with a 3.81 ERA, 28 complete games, seven shutouts, and 71 saves. As a hitter up top he had four homers and 24 RBI's and in the post-season was 0-1 with a 4.76 ERA in two games.

After his release, Segui pitched for eight seasons in Mexico going a combined 96-61 with a 2.91 ERA and throwing until he was 47. In his first season there in '78 he threw a perfect game. After his Mexican run he eventually worked his way back to the Kansas City area. He was a farmer for a bunch of years and also, according to a Seattle Pilots website, a competitive fisherman. There is a Diego Segui still active in Olathe, Kansas, for the Bass Pro Fishing Shops. I suppose it could be the same guy, although since he'd now be 73, I do not know that he would still be working. 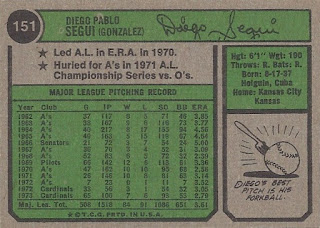 Segui was sort of famous for that forkball. There is an in depth piece about him from the SABR guys here. Like most of these write-ups it is very in depth. It does seem to imply that his '75 appearance in the playoffs was his first, which would be wrong, and it has some decent biographical holes but outside of that it's a good read. 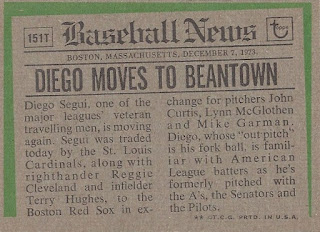 No predictions on this card regarding Diego in Boston. It was a pretty big trade in terms of bodies. Diego nearly played for the Padres. Had he, I am pretty sure he would have been the first guy whose first name was the same as all or part of his team's name. Diego also had a long run in Venezuela winter ball, in addition to his time outlined above. There he went 95-58 with a 2.76 ERA and is in that country's baseball hall of fame. His son, David, would be a big league first baseman for 15 years.

Diego played for the wrong KC team to make this quick, So: