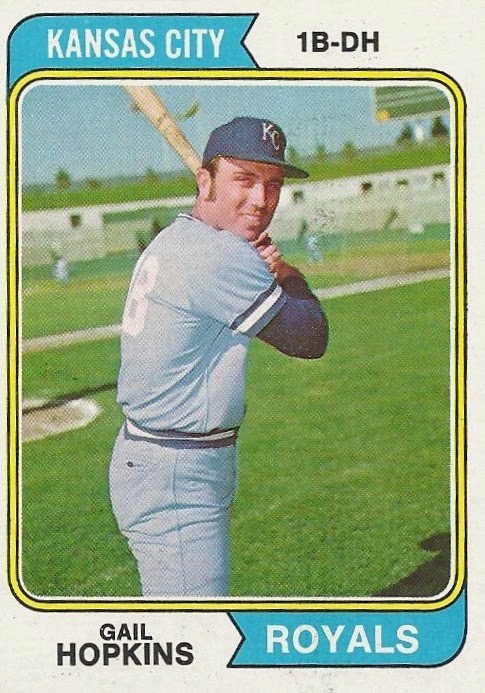 In another final card post we get Gail Hopkins, who shares a couple career paths with the last post subject, Leron Lee. Like Leron, Gail would be in another league by the time of this card’s issuance; would spend his last MLB time with the Dodgers; and would play with a degree of success in Japan following his MLB career. Gail would then go on to bigger and better things back in the States, but at card time he is just enjoying a sunny day in Oakland while some teammates take infield behind him. Gail was in the midst of his third season in KC when this photo was shot, and his second since the acquisition of John Mayberry, who would play nearly every day at Gail’s favored position of first base. That meant that he – Gail – only had moderate playing time those two seasons. In ’73 the arrival of the DH doubled his plate time as he hit .209 with a .342 OBA in that role and did better as a pinch hitter with a .370 average with a .485 OBA. But KC was building itself through its system and the following spring Gail would be released and then do some brief pinch hitting work for LA in ’74. Then things got interesting.

Gail Hopkins was born in Oklahoma and as a kid relocated to Long Beach, California, where in high school he played the big three sports and was a catcher in baseball. He then got a hoops scholarship to Pepperdine where he eventually gave up that sport – too may shots to the head – but continued catching and was an All-American in ’63. He graduated the following year, played ball that summer in Canada, and then signed with the White Sox in ’65. He got off to a good start that year in A ball, leading his league’s catchers in pretty much all fielding stats while hitting .272 with 54 RBI’s. In ’66 he hit the crap out of the ball at that level with a .358/12/66 line in just 312 at bats, though why he wasn’t moved up is a mystery. In ’67, still in A ball, he hit well again, posting a .312/20/79 line with a .439 OBA while splitting time now between catching and first base, his new spot. In ’68 he finally moved up, hitting .324 in Double A and the same level in Triple A around a few at bats during his mid-year debut in Chicago. At both spots his OBA was above .400. Somehow during that season he also coached ball at his alma mater.

In ’69 Hopkins made the cut in spring training and as a rookie split time at first base with Tommy McCraw. Gail hit pretty well and put up a .351 OBA while providing some pretty good fielding. In ’70 he occupied the same role and boosted his average 20 points but missed some time with an injury. After that season he went to Kansas City with outfielder John Matias for Pat Kelly. With KC in ’71 Gail had his best offensive season as he split time at first again, now with Bob Oliver and Chuck Harrison. He actually began the season as a pinch hitter and performed well in that role, hitting .312 with a .500 OBA. That was good training for his future with the Royals because once they stole John Mayberry from Houston, Gail’s plate time declined significantly. In ’72 half his at bats came in the pinch - .219 with a .308 OBA – and per the above he had a nice ’73 in that role. By the time of this card’s issuance Gail had been released in late spring training and he hooked up with San Diego for some Triple A ball in Hawaii where he hit super well with a .308/12/54 line in 330 at bats. That got him a mid-season purchase by the Dodgers, who pulled him up to LA for some more pinch work that summer. After Gail hit .333 with a .429 OBA in that role he was released in late October.

Hopkins was a busy guy in academia during and after his playing career, earning a graduate degree in biology while playing and then four post-graduate degrees after baseball. One of those degrees was an MD and since the mid-Eighties he has been an orthopedic surgeon in both California and West Virginia, where he currently resides. He was inducted in Pepperdine’s hall of fame during his playing career and the Western Collegiate Conference one a couple years ago. He has also served on his alma mater’s Board of Regents for nearly twenty years. This is his final card. 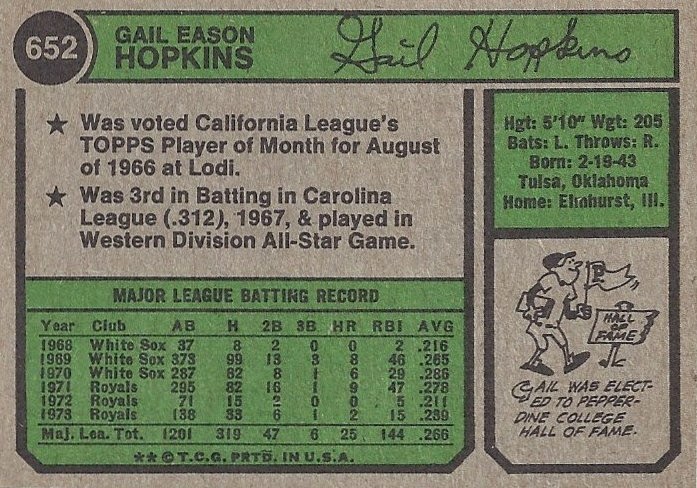 Gail did some nice work in the minors and seemed capable of doing more up top if given more playing time. He earned undergrad degrees in biology and theology at Pepperdine and is a big bible guy. I have been super busy with work which is why there’s been such a delay between posts. Only eight more to go.

I can’t go through Japan for these two so let’s try this: