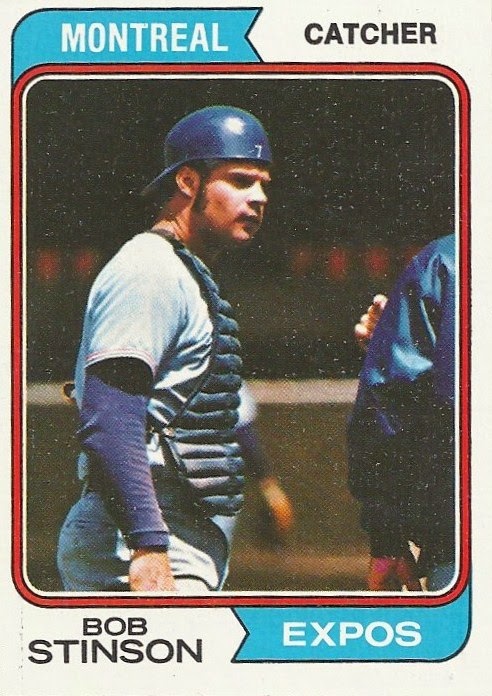 I’m certainly stretching things out here – work is still a monster and uses up all my computer time. For the for real last action card in the ’74 set we get Bob Stinson who appears to be jawing with either an umpire or a pitching coach at an away field that looks eerily empty. ’73 was more-or-less Bob’s rookie year though I believe he put enough bench time for either St. Louis or Houston to not be a true rookie. He stepped into the running menage of Expos catchers, most of whose surnames until then began with a B – Bateman, Boccabella, Brand – after being purchased by them late in spring training from the Astros. He pretty much split back-up time to Boccabella with Terry Humphrey, who was a bit of a better fielder but couldn’t touch Bob’s stick. Bob did a nice offensive job in limited work, adding a .374 OBA to his published stats. He had an interesting early Topps history with three rookie cards from ’70 to ’72, each with a different team (he’s up there with Lou Piniella). What’s going on here is hard to tell, but he sure does look concerned. He’d make up for that on his ’77 card when he seemed full of whimsy.

Bob Stinson was born in North Carolina and had relocated to Miami where in high school he was all-county as an outfielder his junior (.303) and senior (.402) years. Both Charlie Hough and Kurt Bevacqua were teammates on that county team. After graduating he was drafted by Kansas City but stayed local and switched to catcher for Miami-Dade for whom he played fall ball – and then was drafted in the first round by Washington but again passed – and then had a big season in spring ball. He was then taken by LA in the first round and this time he signed. He then spent most of that summer in Rookie ball as an outfielder hitting .282 with a little power. In ’67 he moved up to Double A where his average fell a bit to .243 and his strikeouts ratcheted up but he did a pretty good job in his first work behind the plate. Around his military time in ’68 he boosted his average at the same level to .285 and also upped his catching time considerably. He then moved up to Triple A in ’69 where he hit .281 with much better power, stole twelve bases, and for the first time put up more walks than strikeouts. He also made his debut in LA. After spending most of that season in the outfield he returned to Triple A and catching in ’70, putting up a .298/6/53 line in his 315 at bats but was now having to contend with fellow young guys Joe Ferguson and Steve Yeager. After the season he joined Ted Sizemore in going to St. Louis for Dick Allen.

For the Cardinals Stinson again spent most of the year in Triple A, where he had a nice line of .324/7/46 with a .438 OBA in 300 at bats. He did a little time up top but didn’t get into many games and after the season was on the road again, this time to Houston for infielder Marty Martinez. Bob then spent the whole season with the Astros but again got very little work, and then at the end of ’73 spring training was sold to the Expos. In ’74 John Boccabella went to San Francisco for his final season but new kid Barry Foote kept Bob back in the depth chart and he only got 87 at bats that year. In another spring training deal, Bob went to Kansas City for speedster Rodney Scott.

When Stinson got to KC the Royals had two incumbent catchers in Fran Healy and Buck Martinez so again Bob’s time was limited. But in ’75 he began a pretty consistent run of hitting in the .260’s with a pretty good OBA which was more offense than either of those guys would generally put up and after hitting .265 in 147 at bats that year he got 61 starts behind the plate in ’76 and upped his line to .263/2/25 in 209 at bats before seeing his only post-season action. That November he got nabbed by the new Mariners in the expansion draft and for the next three seasons Bob was the regular Seattle catcher, peaking in ’78 with a .258/11/55 line and a .346 OBA in 364 at bats. In ’79 he began losing starting time to Larry Cox, who was a better defender and a couple years younger. Then in ’80 new guy Jerry Narron showed up and Bob again became third in line in his final season. He finished with a .250 average with 33 homers, 120 RBI’s, and a .337 OBA. In the post-season he went hitless in his only at bat and in the minors he hit .279 with a .350 OBA.

After playing Stinson remained in the Northwest, working for Boeing a bunch of years as a mechanic and also playing in local leagues until the late Nineties when he was hurt at work and in a car accident. He remained with Boeing until his kids finished school and then relocated to Florida where he has been doing private instruction in hitting and golf ever since. 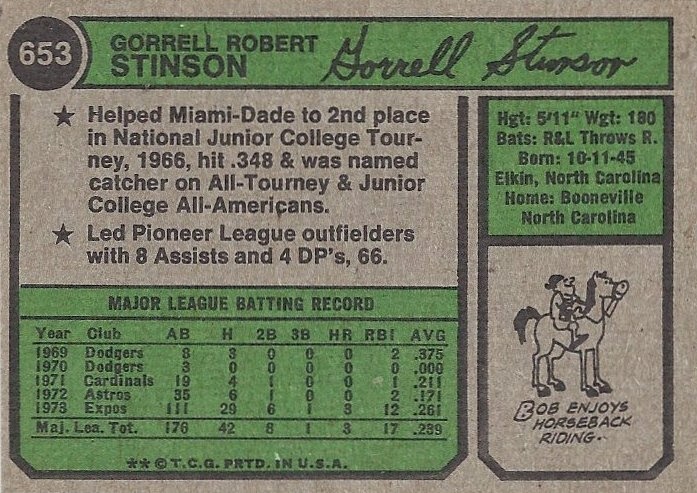 Bob got a lot of notoriety from that JUCO tournament and was a rarity: a catcher who switch-hit. On his cards in which he is in a hitting pose, the pose is always as a lefty. His card in ’80 looks like it was taken a couple seconds after this one. His given first name is pretty cool; this card was the last one on which he’d use it in his signature.

These guys missed being Royals together by just over a season: