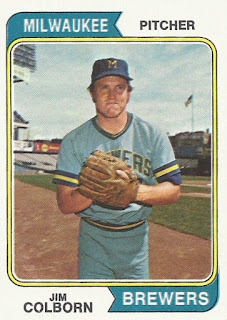 Jim Colborn looks like he is barely able to suppress a laugh at Yankee Stadium. He had reason to be happy as '73 was his breakout year and his profile expanded exponentially with an All-Star and 20-win season. He also was a bit of a kook so it is highly likely that whatever the joke was, he was the only one in on it.

Jim grew up in California and graduated from Whittier College in '67 with a degree in sociology. He played baseball there and was skipped over in the draft but was signed later that summer by a Cubs scout as a free agent. That signing came after he requested a competing college coach to get him a tryout since Whittier had no relationship with anyone vis-a-vis baseball. That year and in '68 Jim had a nice run in A ball, going a combined 19-9 with a 3.25 ERA at that level. He missed a little time prior to the second season because in late '67 he was awarded a scholarship to the University of Edinburgh to work on his masters where he also played hoops and was named All-Scotland in basketball. In '69 he jumped to Triple A where he went 8-7 in the rotation with a 2.28 ERA. Those numbers earned him a call-up that July where the work was scarce but he pitched well. Jim continued to do so in '70 in Chicago, again primarily in relief. But, being a "college boy",  he was far from Leo Durocher's favorite, and after a poor start to the '71 season Jim was sent back to Triple A where he remained in the pen and again recorded pretty good numbers which included eight saves. After the season he and Brock Davis were sent to Milwaukee for Jose Cardenal.

Things went much better right off the bat for Colborn around the corner in his new home. As a spot guy he put up some nice numbers in '72 - a .500 record and 3.11 ERA for a team that lost 91 games. In '73 he started the season as a reliever, and in early May, relieved Bill Parsons early in a game and pitched the final nine innings, getting the win. Then, when Parsons, the Brewers' boy wonder the past two seasons, couldn't get in gear, Jim took his spot in the rotation. By mid-June he was 11-3 and the Brewers were in first place. They both cooled off considerably after that and it took Jim four attempts to get his final win, but in the end he became the Brewers' first 20-game winner and made that All-Star team. He also garnered a reputation as a flake by throwing on a mask and sweeping the field during a rain delay. Unfortunately it was tough for Jim to reproduce that magic the next three years and as the team got progressively worse over that time, so did Jim's record as he went a combined 30-41 with a 4.00 ERA.

Following the '76 season, Colborn went to the Royals with Darrell Porter for Jim Wohlford, Bob McLure, and Jamie Quirk. The trade proved instantly successful for KC as it got a solid starting catcher and a hurler that won 18 games. Colborn also pitched a no-hitter that season. It was his only season with a division winner but because Whitey Herzog went with all lefties against the Yankees, Jim saw no post-season action. After a poor start in '78 he was traded to the Mariners for Steve Braun. But '78 ended worse than it started and he was released before the beginning of the '79 season. That was it as a player for Jim. For his career he went 83-88 with a 3.80 ERA, 60 complete games, eight shutouts, and seven saves.

Although a bit unorthodox as a player, Colborn has had a pretty varied and successful career in baseball since the early '80's. After some time away from ball he got started in the Cubs system as a pitching coach ('84-'86) and then pitching coordinator ('87-'89). He then coached in Japan for Orix ('90-'93), managed in the Oakland chain (where he was 223-192 from '94 to '96), was director of Pacific rim scouting for Seattle ('97-2000), and has served pitching coach for Jim Tracy in both LA (2001-'05) and Pittsburgh ('06-'07). Since then he has taken on that Pacific rim gig again, now for Texas, which he is still doing. There is an interesting interview with him here. 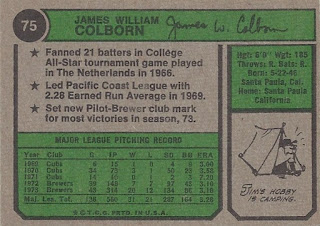 The star bullets represent some nice numbers. I guess Jim experienced a baseball pull away from the States at an early age. Jim was tight with a bunch of teammates, including Ken Holtzman and Ken Brett and was a pallbearer at the latter pitcher's funeral.