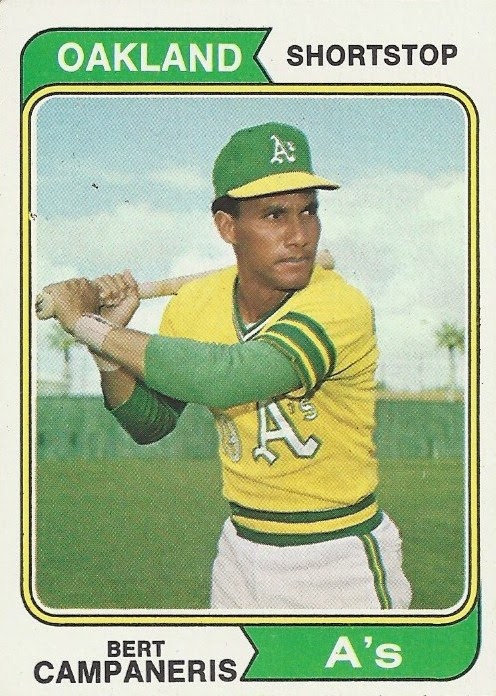 This is a pretty prosaic card after all the great A's action shots but I guess we were due. Before I get into Campy here I have to give props to some of the recent commentators, particularly Clay, who has educated me on the Expos' spring training sites and carlsonjok on photography. With this card we are back to the A's following or leading the Mets by a card or two. Bert had a pretty typical season for him in '73. After missing the first week for a suspension - see below - he worked his way out of an early slump to get another All-Star nod based on his mid-season .300 average. That cooled off a bit over the balance of the season but more good defense numbers preceded his best offensive post-season that all contributed to his second straight ring.

Bert Campaneris was yet another player born and raised in Cuba. There Bert was primarily a catcher and after he was signed by Kansas City in '61 it was the position at which he first played in the minor leagues. In a '62 season split between D and Single A ball he also played the outfield, shortstop, and first base. He even pitched a couple games and in one he did so ambidextrously. His offense at both levels was quite good as his combined numbers included a .300 average with a .390 OBA. In '63 he graduated to Double A for a short season - perhaps he was injured - and he stayed there for the bulk of '64, both seasons hitting above .300 while concentrating primarily on shortstop. He came up to KC later that second season and in his first game hit two homers off Jim Kaat. While Bert was not without power, that game was not indicative of the type of player he would be. What he would be was a slightly above average hitter for a shortstop at the time with a not too great OBA, but who could steal bases, run intelligently, provide very good range defensively, and have a great attitude. From late '64 through '76 Bert would be the regular A's shortstop, accumulating five All-Star nods during that time. In '65 he showed his versatility by playing an inning at each position. That experiment ended badly when he was steamrolled at the plate by Angel Ed Kirkpatrick and then missed a couple games with a dislocated shoulder. In '66 he showed his base-running skill by scoring four times in a win without the benefit of another player's RBI. From '65 to '68 he took over from Luis Aparicio and led the AL in stolen bases each year, which he would do again in '70 and '72. During the '68 season he also led the AL in hits. In '70 he became a power hitter for a season, knocking 22 homers with 64 RBIs, both personal bests by wide margins. In '71 the solid play began paying off as Oakland won its first of five straight division titles. In '72 Campy only played a couple playoff games against Detroit; he was suspended for the rest of them because he threw his bat at Tiger reliever Lerrin LaGrow after the pitcher threw at him. He was suspended ten games for that, but Bowie Kuhn allowed him to play in the Series and the remaining suspension was pushed forward to the '73 season.

In both '74 and '75 Campaneris would again be an All-Star and have two of his best offensive seasons. The first year he topped out in average and OBA, with a .290 and .347, respectively. Then in '76 he put up his last big stolen base total of 54 - the most he'd had in seven seasons - as the A's set a team record. Following that season he was part of the big exodus and signed with the Rangers as a free agent. While on paper his offensive and defensive numbers held and he was again an All-Star, at 35 his range was being compromised. In '78 his numbers tumbled hard and early in the '79 season he was traded to the Angels for Dave Chalk. For California he was a part-timer for the balance of '79 through '81. The Angels did not re-sign him after that last season and the following year he played in Mexico. In '83 he came back to play some games for the Yankees and hit .322. He also played some minor league ball for those guys and after the season left as a free agent. That was it for Campy and his totals would include a .259 average with nearly 1,200 runs, 313 doubles, 86 triples, and 79 homers. He also stole 649 bases and is currently 14th all-time in that category. He does lead lifetime in playing in the most no-hit games at eleven. In the post-season he hit .243 with eleven RBI's and ten steals in 37 games. He is still the A's leader in games played.

When done playing Campy settled in Arizona. He did some coaching in spring training for a couple clubs and coached in Japan from '88 to '89, but while there had two of his World Series rings stolen. He played in the Senior Baseball League in the late '80s and holds local baseball camps around AZ. He is also a regular at lots of MLB fund raising events. 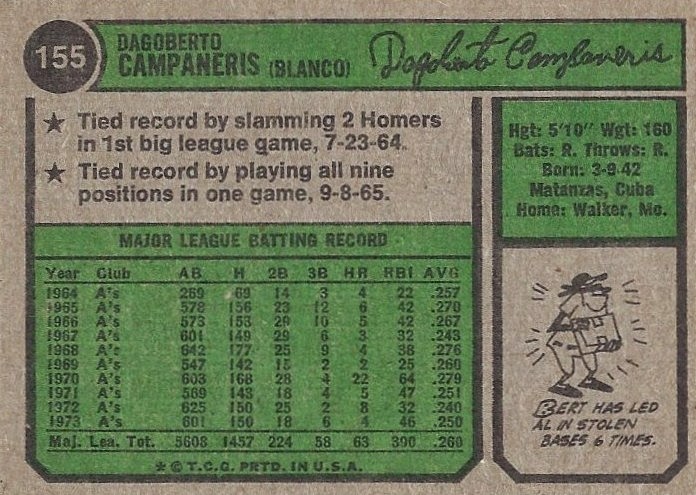 Most of this stuff I covered up top. In the early '90s Bert had a young daughter and it turned out that one of her classmates in Scottsdale was the daughter of Lerrin LaGrow, the pitcher at whom he'd thrown the bat in the '72 playoffs.

I'm going to opt for some power guys on the hookup: