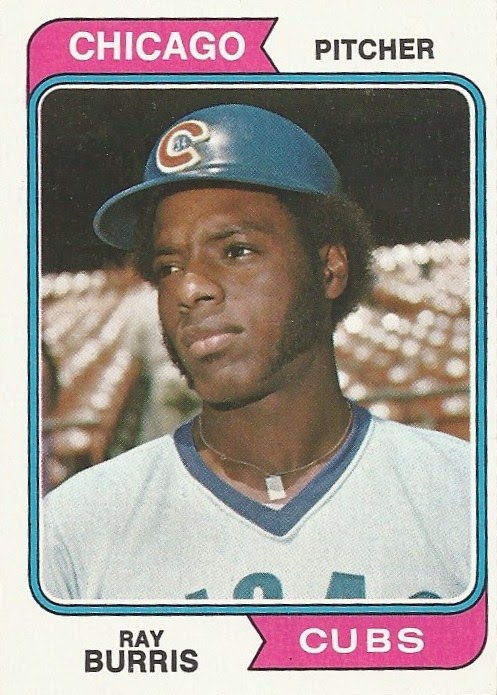 This is the first rookie card in the set for a while and its subject has some of the best muttonchops in the set so far. Ray Burris was a big kid and was probably pretty intimidating if that was the scowl he normally had on his face while pitching. Here he practices its usage at Candlestick. Ray had sort of a bipolar '73. He made the Chicago roster out of spring training, won his only start, and threw some nice ball out of the pen, and by early May had a 1.15 ERA in his 16 innings of work. But he needed more mound time so the Cubbies moved him down to Triple A where he had a rough go of things in the rotation. He came back up in late June, and while not matching his early-season numbers, continued to throw well in middle relief work the rest of the way.

Ray Burris was an Oklahoma kid all the way. Upon finishing high school he attended what is now Southwestern Oklahoma State University where he pitched as a starter for four years. He was then drafted and signed by the Cubs in '72 and started things off at Double A in the rotation, showing excellent control. In '74 he continued where he left off, posting a 2-0 record and a good ERA his first month, but a tough late spring and summer raised his ERA a couple runs and got him some time back in the minors as he finished 3-5 with a 6.60 ERA. But in '75, despite a relatively high ERA, he would win 15, which he would repeat in '76 while pulling his ERA down a run, earning the distinction of being one of the league's five best young pitchers in a Baseball Digest article later that year. But those two seasons would be his best overall. In '77 he won 14 as the Cubs made an early season run for the division but he also lost 16 as his ERA ballooned. In '78, another losing season, his ERA remained toppy and it was his final season in the rotation for the Cubs. He began '79 as a long guy out of the pen and then in May went to the Yankees for Dick Tidrow.

Getting to a new league didn't help matters at all for Burris and after a 1-3 stint with a 6.18 ERA he was placed on waivers late that summer. He was taken by the Mets and for them he got in four decent starts although he went 0-2. He remained in the rotation in '80 and went 7-13 with a 4.02 ERA, after which he departed NY for the Expos via free agency.

For Montreal, Burris had a bit of a resurgence, going 9-7 in the strike year for his first winning record since '76. He also had a 3.05 ERA, his best in that department since his rookie year. In the NL Championship Series vs LA he had his finest hours, going 1-0 with a 0.53 ERA in 17 innings. Ray would stay with the Expos two more seasons, with neither approaching his '81 work. Following the '83 season he went to Oakland for Rusty McNealy and cash. His '84 season would be his final one as a winner, as he went 13-10 with a 3.15 ERA. He then went to the Brewers essentially for Don Sutton, and then flip-flopped between them and the Cards for the next three seasons, none terribly successful. His last season was '87 for Milwaukee. His final numbers were 108-134 with a 4.17 ERA, 47 complete games, ten shutouts and four saves. His overall post-season numbers were 1-1 with a 1.61 ERA in his three games

Ray is another guy who moved right into coaching once his playing career ended. In fact he was the Brewers pitching coach in '87 before he got into a few games. He would work for both the Brewers and the Rangers up top, play some Senior baseball at the end of the Eighties and then work for a bunch of teams in minor league capacities, usually as a roving pitching coach. He is currently doing that for the Tigers. 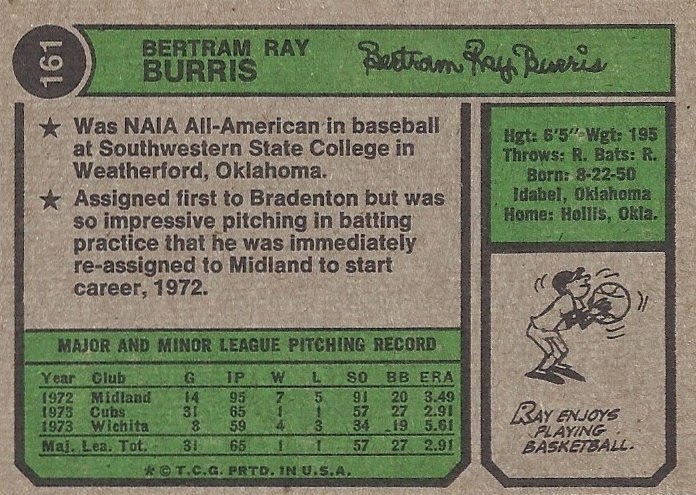 This is an interesting card back. The first observation is the obvious one: someone forgot to turn the number screw an extra quarter on the upper left. No wonder Ray looks a little pissed on the front! He prefers the formal signature and his was nice and legible in that '70's style with the little o for a dot. The first star bullet references the old name of his school. There he won 35 games in his career including 16 his senior year during which he K'd 150 batters, which was then an NAIA record. He was inducted into his school's hall of fame in '85. The second star bullet indicates Bradenton, which was the Cubs' rookie team, and Midland, their Double A team. Lastly, Ray was 6'5" so I don't know why the basketball's so big in the cartoon, but he was probably pretty good.

I'm going to pull in one of my favorite pitchers on this one: