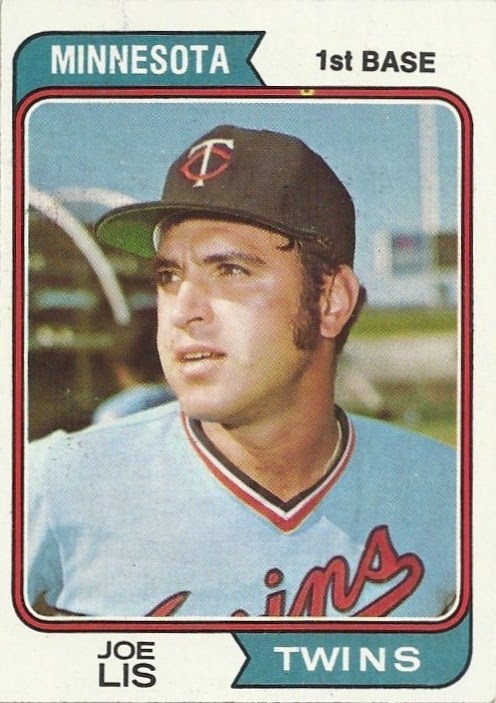 This mutton-chopped guy finally gets his first solo card, nearly ten years after being signed in ’64. Joe Lis had rookie cards in both the ’70 and ’71 set and then switched teams before reappearing on a sunny day in Oakland during batting practice. He got his first serious chunk of playing time in ’73 partly as a result of Harmon Killebrew’s injury, and put up some decent numbers while filling in at first base. Joe could hit, as some of the numbers on his card back attest, but up top he’d suffer from too little field time and way too many strikeouts and shortly after this card’s appearance he’d be on the move again. But he loved baseball and while it didn’t always love him back, he would parlay that love into a long career in a different venue.

Joe Lis was a big three sports star in New Jersey in the early Sixties and would end his high school baseball career with a .521 average and a total of 17 homers his junior and senior years before being signed by the Phillies in June of ’64. That summer and the next in A ball were a bit tough at the plate but the latter season he was one of his league’s best-fielding third basemen and in ’66 around some military time he got back his power stroke with 16 homers and 62 RBI’s in just 332 at bats. He remained at that level in ’67 and really cranked the power that season. Despite his improved numbers he remained in A ball in ’68, added 40 points to his average, and began putting in some serious outfield time. He made the big jump to Triple A in ’69, just in time for his first significant loss of time to injury via some hamstring and wrist problems, but still put up OK numbers. By then he was pretty much exclusively an outfielder and his ’70 season would be far better than OK as he seriously crushed the ball in Triple A and made his MLB debut in September with a few games in left field. In ’71 the Phillies didn’t have much of a team – they’d record 95 losses that season – but they had a bunch of young outfielders coming off excellent ’70 minor league seasons in Willie Montanez, Greg Luzinski, Roger Freed, Mike Anderson, and Joe. That competition was escalated by the presence of incumbent Larry Hisle, who was only 24, and the move of Don Money to the outfield. So despite making the Phillies out of camp and getting some early season starts in left, when Joe went into a bit of a slump marred by pretty high K totals, there was no shortage of guys to step in and his at bats declined as the season aged. He began the ’72 season back in Triple A where his monster stats included a .473 OBA and prompted his return to Philly in June. Now moved to first base, he improved his offensive numbers significantly, reducing his K totals and moving his OBA up to .380. But with Willie Montanez scheduled to take over first full-time, Joe and pitchers Ken Sanders and Ken Reynolds went to Minnesota for everyman Cesar Tovar.

Lis remained with the Detroit organization a couple additional years as a minor league coach, leaving pro ball following the ’81 season. He had begun doing the guest speaker route while in Cleveland which he continued after playing. He also set up a hitting school in his garage back in Indiana which eventually morphed into a business. His son Joe Jr. would be drafted by the Blue Jays and reach Triple A in the mid-Nineties before helping out at his dad’s school. This Joe continued to operate his hitting school until he was laid low by prostate cancer, from which he passed away in 2010. He was 64. 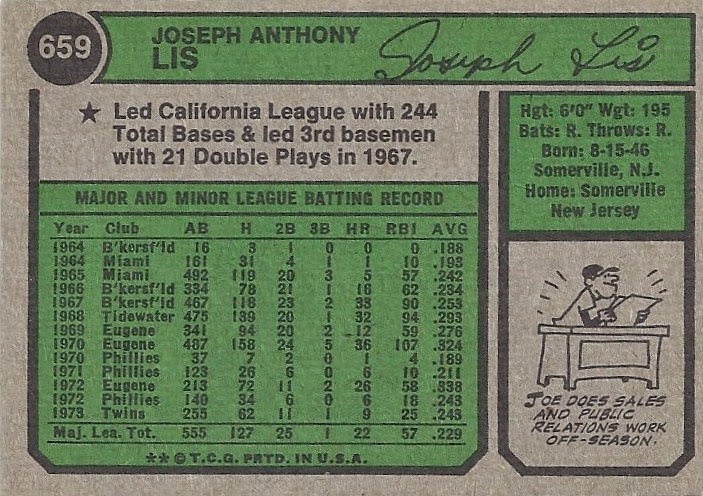 Joe’s card back shows off most of his better minor league work and showcases his slugging and defense in ’67. He had much better season as a slugger though, topping his .522 slugging average that year in ’70 (.616) and ’72 (.775). That second year he seemed an even money bet to break Tony Lazzeri’s PCL record home run total of 60 when he was called back to Philly. Joe had 26 homers with about two-thirds of the season still left. He has a pretty good SABR bio.

The colors are almost the same but the leagues aren’t so let’s see how we get these guys together: