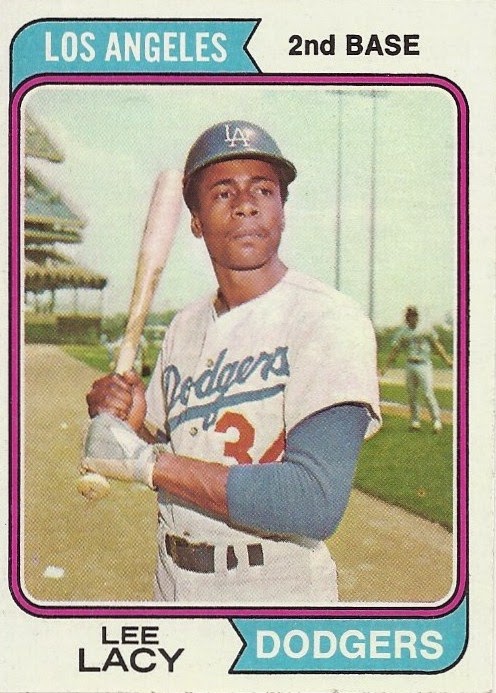 I really am stretching this thing out but, trust me, it’s not intentional. Too much work and other stuff. For our third-to-last card we get Lee Lacy at Shea looking very serious. That face could have something to do with what was going on at the time in the LA infield, then Lee’s professional stomping ground. ’73 saw the initiation of that long-lasting combo of Garvey/Lopes/Russell/Cey which meant that Lee’s playing time contracted considerably from his rookie season. For a while things would stay that way and barring injury it would be tough for Lee to get any field time. But his versatility would prove to be his saving grace and that ability to play just about anywhere in the field would help him have a long fruitful career.

Lee Lacy was born in Texas and relocated to Oakland before high school. He did the multi-sport thing and then went to nearby Laney College where he played both hoops and baseball. He was drafted midway through his second year there in January ’69 and then played mostly third while producing some pretty good offense that included a .402 OBA. In ’70 he moved up to A ball and over to shortstop where he produced more good plate numbers but had a super tough time in the field. His offense got him to Double A in ’71 where on top of another good offensive season he improved at both shortstop and third but actually spent most of his time at second, which seems to have been a better fit. Lee remained at that level and position for ’72 where he banged the ball super well, putting up a .417 OBA, continued to improve his defense, and got his call up in June.

The late Sixties and the early Seventies were sort of a transitional mess for the Dodgers outside of first base. There were lots of crash and burns at third – Bob Bailey, Bill Sudakis, and Billy Grabarkewitz – and for a little bit Ted Sizemore seemed to be the man at second after his ROY season in ’69. But he went to St. Louis to get Dick Allen, Jim Lefebvre got hurt and was needed to fill the gap at third, fellow young guy Bobby Valentine played everywhere, and converted outfielder Bill Russell eventually settled at shortstop. Into this stew came Lacy in the summer of ’72 to pretty much take over the regular job the rest of the way.while plugging the gap on defense and doing an OK job at the plate. He then began ’73 in the same role, got hurt in mid-May while hitting .195, and returned to see his spot taken by Davey Lopes, who wouldn’t give it up until Lee was long gone. In ’74 his at bats fell even further during the championship season though he hit .282 and got a bit of post-season time. In ’75 LA got hit big by the injury bug which killed their playoff chances but worked nicely for Lee, who posted a .314/7/40 line in 306 at bats while filling in at second and for the first time in the outfield. After that season he joined rapidly-aging Jimmy Wynn, Tom Paciorek, and Jerry Royster in a trade to Atlanta for Dusty Baker and Ed Goodson. With the Braves, Lee took over regular duties at second before a hitting slump and then an injury took him out of action a couple weeks. But he got his average up to .272 before he was traded again, this time back to LA with reliever Elias Sosa for Mike Marshall. The rest of the way for the Dodgers he spent the bulk of his time in center and hit .266 overall, with a .385 average as a pinch hitter in what would be his busiest year for a while. In both ’77 and ’78 he did his back-up thing in both the infield and outfield, averaging in the mid-.260’s. That first year he hit very well in a return to the post-season and in that second year he added some power, with a .261/13/40 line in 245 at bats. That winter he left LA as a free agent and signed with the Pirates.

Lacy got into a bit of trouble when he was named late in his playing career as one of the cocaine-using players during the Pittsburgh drug trials. By then he’d had his daughter Jennifer, who would grow up to be a star hoops player at Pepperdine and is still playing in the WNBA. Lee did the year-plus in the Senior League in ’89 –’90 and appears to have remained in the Southern California area since playing for LA. He is a regular at autograph and other events for the Dodgers though I haven’t been able to nail down what he’s done professionally since playing. 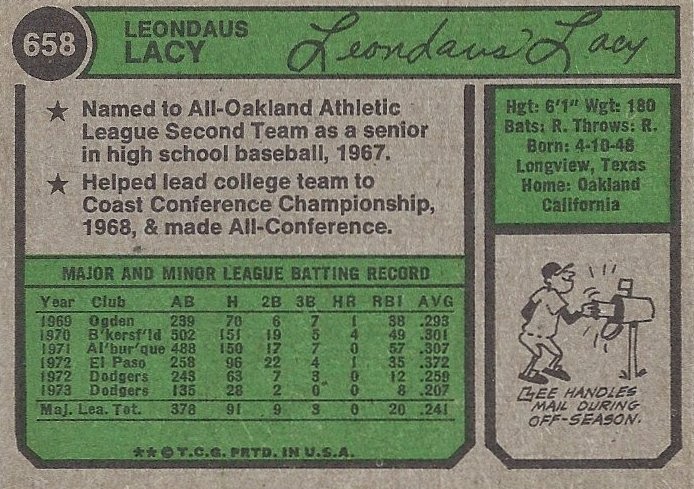 Lee’s star bullets give us a look at some of his achievements in high school and at Laney. His is also the final card that gives us a look at what he did during the off-season via the cartoon.

Getting these two together is relatively lengthy: