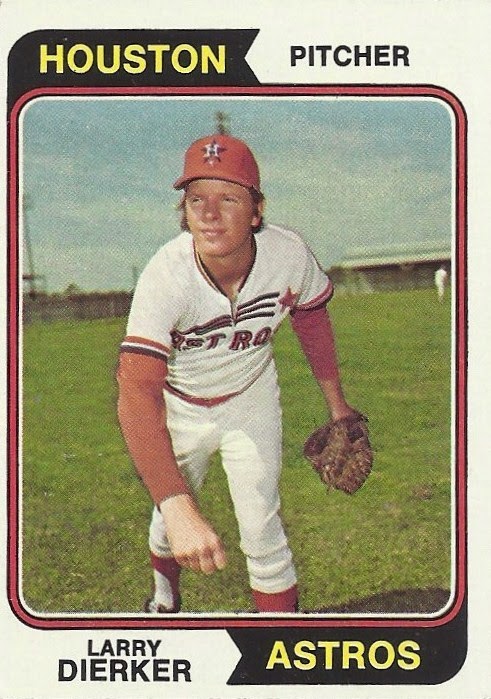 And the final card of the ’74 set belongs to... Larry Dierker, showing his pitching form in spring training on that huge complex. Larry broke his hand right before the season opened in ’73 so this shot is taken earlier that season or is from a prior one. The season didn’t get much better. After returning in June for a couple starts Larry hurt his shoulder and wouldn’t return from that injury for another month, and then didn’t throw too well the balance of the season, nearly all of it in middle relief. It was pretty much a season to forget for him, but not for Topps apparently, since it gave Larry a pretty distinctive card number. Larry was an optimist, though, and things would turn around for him shortly and get way better down the road, except for that short run in ’99 that must have made ’73 look like a picnic.

Larry Dierker grew up in southern California and would get to be a big sought-after pitcher, already 6’4” and 200 pounds by his senior year at Taft High School. Though he went only 4-6 that season of ’64 he reportedly had 18 teams interested in him. That number was reduced to a bidding war of two: the Cubs and the Colt .45’s and Larry signed with the latter team for a $55,000 bonus. He was only 17 but he kicked off things pretty well that summer in Rookie ball, going 2-3 in nine starts with a 3.23 ERA and 61 strikeouts in his 39 innings. The Colt .45’s were always looking for a media event and so that late September Larry was pulled up to Houston to make his first MLB start on his 18th birthday. He took a loss, but he struck out Willie Mays in that game and would never return to the minors.

Dierker immediately joined the rotation in ’65 and that season and the next he would have a tough time getting decisions. In ’65 the now Astros would hold Larry to a 110 pitch count timit per game which kept him from completing too many but in ’66 he went deep in pretty much every start though  by the end of May he only had two decisions. Still, both years he posted strong second halves and overall threw well, cementing his rotation spot. He was enjoying a nice run in ’67 when in mid-June he was called to his military obligation and missed the rest of the year. Back on the mound in ’68 was a bit different and Larry would get a decision in all but five of his games that season. In both ’66 and ’68 he spent some short time on the DL in late July. In ’69 he used an early-season 10-3 run to become the first Houston pitcher to win 20, supporting it with an excellent ERA and his lifetime high in strikeouts as he made his first All-Star appearance. In ’70 his ERA got bloated a bit by a few too many gopher balls – he gave up 31 homers vs. only 18 in ’69 – and in ’71 his 10-4 start got him another All-Star nod before he suffered his first serious shoulder ailment and missed the season from early August on. It was, he would later claim, the beginning of his rotator cuff issues that would haunt his career going forward. Still, the rest he received in ’71 helped him produce another very good year in ’72 before everything sort of blew up in ’73. “74 would be much better and though Larry again pitched well, decisions would be elusive, especially early in the year. He finished with a record of 11-10 with a 2.90 ERA and followed that up in ’75 that resembled his ’70 season: 14-16 with a 4.00 ERA on a few too many homers. In ’76 another relatively fat ERA followed until a July game in which he no-hit the Expos set him on a 6-6/2.83 pace the rest of the way as he finished the season 13-14/3.69, his final one in Houston as a player. He was traded to St. Louis with Jerry DaVanon for catcher Joe Ferguson but by that time his shoulder was toast and after a 2-6/4.58 run in only 40 innings he retired with a record of 139-123 with a 3.31 ERA, 106 complete games, 25 shutouts, and a save.

Before 1977 ended, Dierker was back in Houston where he got a front office PR and sales job. In ’79 he began a long run as a color commentator on Astros broadcasts which would last through ’96 when he was talked into taking over as the Houston manager. The Astros had had three straight second-place finishes and though Larry had no experience on the coaching side, he would be the right guy to get the team over the hump. His first and second years Houston won its division. In ’99 the team was enjoying another nice run when Larry went down in the dugout with what would be called a grand mal seizure, from which he would require surgery to deal with a blood clot in his brain. He would return to lead the Astros to another first place finish. 2000 would be tough as a big injury bug decimated his team but in 2001 the Astros would win the division again. Despite the regular season successes, though, the Astros would go down fast in the playoffs each year and following the ’01 campaign – in which Larry won the second of his Manager of the Year titles – he would be either dismissed or resigned, depending on the source of the information. He finished with a record of 435-348. Since then he has written a couple books, contributed as a writer to a few sites, and had a loose community affiliation with the Astros. That changed in May of 2013 when he was hired as a full-time special assistant to the president, a title he still holds. 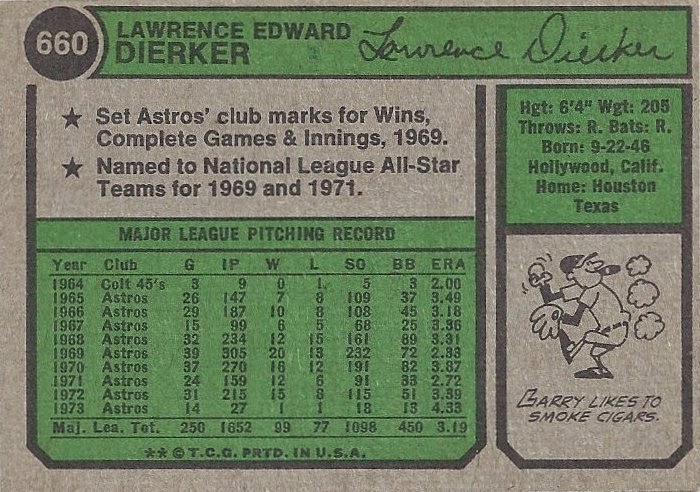 Larry’s star bullets are no-brainers and he has also been a big fan of golf according to his cartoons. He gets some great props in “Ball Four” since he was teammate of Jim Bouton’s after Bouton’s second-half trade to Houston. Bouton loved his arsenal of pitches: a great fastball and curve, and a money hard slider which Bouton said it hurt just to watch (and would later hurt Dierker as well). He was also very impressed with a no-no Larry took into the ninth, continued to pitch shutout ball to the 12th, and then had to watch as the bullpen blew in the 13th against the division-winning Braves. He just calmly took the loss and blamed nobody. Pretty classy.

For the final hook-up we stay all-NL: