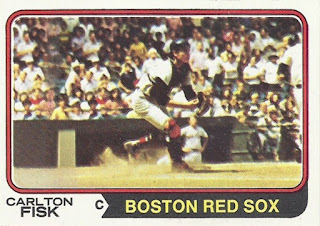 Each of the last two milestone cards has been a Hall of Famer and so is this one. This would be a great action shot of Carlton Fisk at his favorite place to play , Yankee Stadium, if only it wasn't so blurry. I am guessing that Fisk is awaiting a throw at home and that some Yankee just scored given that a bunch of the fans are on their feet and the guy on the far right seems to be nonchalantly leaving the area. So far it looks like Topps reserved the horizontal action cards for either the HOF guys or catchers. Whatever the specific action here, the photo is taken dead in the middle of Fisk's second full season, which was also his second All-Star one. While most of his offense was a bit of a discount to his rookie year's, Pudge still put up some pretty good league numbers, continued to get props for his defense, and really upped his pugnacity profile, especially in NY. But ya had to love the guy's competitiveness, even if you were a Yankees fan like I was.

Carlton Fisk was drafted out of the University of New Hampshire in the first round of the '67 draft. He then had to fulfill his military commitment, since he'd left school early to play baseball. After a great initial season in Single A in '68 he moved through the ranks the next three years. While his offensive numbers were nothing to write home about, he was developing a reputation as a superior defensive catcher and a great handler of pitchers. After putting up some nice numbers for the Sox at the tail end of '71 he wowed them in '72 with a great rookie season on the way to the first unanimous ROY award. He also acquired his only Gold Glove that year and his first All-Star appearance. In '73 his average took a hit but his power didn't and he was voted an All-Star starting slot. It was also the season he had his first fight with Thurman Munson that led to one of the infamous bench-clearers. In '74 Carlton had a nice year going when Leron Lee of Cleveland nailed him at the plate, wrecking Fisk's knee for the rest of the season and the first half of '75. But he came back strong when he returned in late June and put up pretty amazing numbers the rest of the season: a .331 average, .395 OBA, with 10 homers and 52 RBIs in 263 at bats. He continued kicking butt in the playoffs (.417 average), and of course had his stirring home run moment in Game 6 of the Series. More All-Star seasons followed as he and Thurman slugged it out for supremacy at AL catcher. In '77 Pudge had his best BoSox offensive numbers with a .315 average, 26 homers, and 102 RBIs. '78 would be another great year but then in '79 he got hurt again - this time I believe it was his shoulder - and the offense suffered a pretty big dip. And then, following a good comeback in the 1980 season the unthinkable happened: Boston let him go as a free agent.

Fisk signed with the White Sox, reversed his number, and picked up pretty much where he left off. While the average came down from his BoSox days, the power remained and he stayed healthy, thanks in part to a new training program. In '81 he won the first of his three Silver Sluggers - a new award given to the best offensive performer at each position in the league. In '83 on the way to his second and final post-season he finished third in MVP voting, his personal best. In '85, although hitting only .238, he put up his best power numbers of his career with 37 homers and 107 RBIs. Then he was the Energizer bunny and just kept going. By '91 he had two more Silver Slugger years behind him and was still Chicago's starting catcher at age 43. He was released by the Sox in June of '93 and finished things up with a .269 average, 376 homers, and 1,330 RBIs. He also had 421 doubles and got on base at a .341 clip, as well as 128 stolen bases, a pretty good total for a catcher. He made it to the All-Star game 11 times. In 2000, his second year eligible, Carlton was voted into the Hall. Since retiring as a player, he has spent a bunch of time growing orchids. 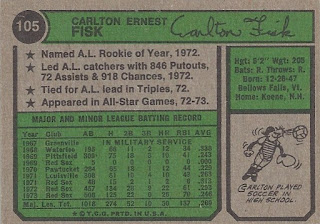 Topps loads us up on '72 tidbits on the back. I am pretty sure he is the second - after Tim McCarver - and last catcher to lead his league in triples. Back then, Fisk would have been an awfully big soccer player.

So Fisk breaks the hold by the west coast. This will be challenging: