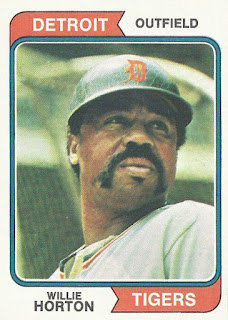 I don't think I'm going out on much of a limb when I say that this is the best card of the set. I know we're not even a fifth of the way through but this card is a masterpiece. From that helmet that would go everywhere to the mustache to the pose and expression that would fit perfectly on Mount Rushmore, Willie Horton gives us one of the baddest-ass shots ever. This is the look of a guy that says "Yeah, I just took you deep with my one-handed stroke. Next time I'll take you deeper." And in '73 Willie was ready to do just that. Coming off a '72 that was about his worst season, Willie benefited from a better relationship with his manager that promised more starting time; a new roommate in Frank Howard; and a strong start at the plate, going 12 for 29 in his first seven games. While he had much bigger power years, Willie turned in his best MLB avaerage and got himself a "5" card.

Willie Horton was born in Virginia and grew up in Detroit. He was the youngest of 19 kids (!!!), six of whom passed away before he finished high school. When he was done playing high school ball he hooked up with a sandlot team called Walway and in 1960 participated in something called the Altoona Class D tournament in which he hit .600. The tournament MVP was Bill Freehan. In '61 Willie signed with the Tigers - after passing up a bigger offer from Boston - for $22,000 of which he used $10,000 to buy his family a nice house in the 'burbs (amazing what ten grand could get you back then). Willie plowed through the minors quickly, moving from Class C ball in '62 to Double A the next year. At the end of the '63 season he came up to the Tigers, hit .326, and hit his first homer off Robin Roberts in front of his dad. In '64 a poor start had him down in Triple A where he hit .288 with 28 homers and 99 RBI's. He returned in '65 and set himself up in left field where he would be the starter for a bunch of seasons. His first two years he grabbed over 100 RBIs. In '65 while playing winter ball his folks were killed in a car crash which sort of beat the poor guy up. He added to his growing legend in '66 when he broke a bat on a checked swing. In '67 he developed an inflammation in his heel which killed his ribbie totals but the improving Tigers nearly won the pennant. Willie did try to single-handedly stop that year's race riots in Detroit. In '68, his heel repaired, he came back strongly, hitting a career-best 36 homers, getting the game-winner for Denny McLain's 30th, and having a super Series. Along with hitting .304 with a .448 OBA he threw Lou Brock out at home in the play many thought was the Series turner.

In '69 Horton again had some nice power numbers but he went AWOL for a week during the season when he thought he wasn't being appreciated (he was pissed off about the way he'd been used in the Series). In '70 he hurt his ankle and was done by mid-July in what was setting up to be his best season. In '71 he was healthy but he began being platooned in left and started playing right field. He also got a new manager that year named Billy Martin and the two didn't get along terribly well. That situation sort of peaked in a bad way in '72. Willie showed up to spring training overweight and during the season would hurt his foot and shoulder, missing a bunch of time. Martin also benched him, the first time that had happened, and Willie turned in by far his worst offensive numbers. And that was topped off by a one for ten performance in the playoffs. After the nice bounce in '73, Willie's legs were starting to break down and he had his knee operated on, missing half the season. Too bad because he went out hitting .298 with 47 RBI's in just 238 at bats. He did, however, have enough power to kill a pigeon with a ball he hit. In '75 he was given the DH job and responded nicely, putting up his best full-season power numbers in years (25 homers and 92 RBI's). He won top DH award that year (it is now called the Edgar Martinez Award). In '76 Alex Johnson and Rusty Staub were added to the lineup so Willie lost some at bats. He also re-hurt his knee that season and in '77 after one game he was sent to the Rangers for Steve Foucault.

Horton had a good season during the '77 Texas revival with a line of .289/15/75 but at the end of the year was traded to Cleveland with David Clyde for Tom Buskey and John Lowenstein. He also played for Oakland and Toronto that year which meant his spray paint got quite a workout - he kept his batting helmet and repainted it every time he joined a new team. In Toronto that year he had a wiggy experience when he and his family had a fight with some fans in the parking lot and a mountie hit him over the head, putting Willie in the hospital, according to him with a coma for two weeks. But redemption happily came in '79 when, picked up by the Mariners, he put up a .279 average with 29 homers and 106 RBIs to win the Comeback Player of the Year, also winning that Edgar Martinez to be thing again. A disappointing '80 season followed and after a trade to Texas again, Willie would get to Pittsburgh and play the next two years for the Pirates' Triple A club, where he put up quite good numbers - an average line of .287/20/79 in 400 at bats - but apparently not good enough to be recalled. After a year in Mexico in '83 he was done. For his career he hit .273 with 325 homers and 1,163 RBIs. He also played in four All-Star games and was a .242 hitter with a homer and three RBI's in twelve post-season games.

In '85 old antagonist and new friend Billy Martin brought in Willie to coach the Yankees. He also coached for the White Sox in '86. After a bunch of years affiliated with some non-profits, Willie hooked up with the Tigers in 2000 in admin as a community outreach guy. He is still there. 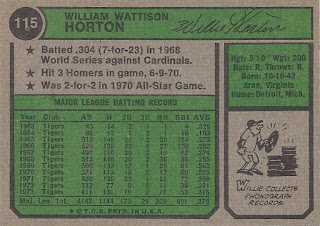 Willie has a nice signature. Its almost rune-like. Boy, nothing dates a card like the term "phonograph records." That was old even in '73!

All AL this time: