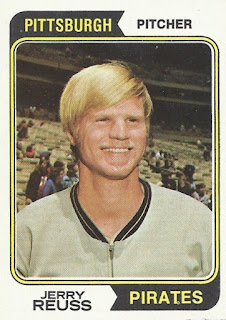 Now here's a happy guy. Jerry Reuss smiles a lot on his cards. He looks like he knows how to turn on the charm. Small wonder that after he finished playing he became a sportscaster. Jerry is smiling even though someone did something horrible to his uniform. He isn't exactly airbrushed here. He just had all identifying symbols removed. He was also just traded from the Astros to the Pirates so that was something to smile about. But '73 was actually a pretty good year in Houston for Jerry: his hot start to the season - 11-5 by the All-Star game - helped keep Houston in the running through midyear and he finished the season with his first MLB plus-.500 record, led the NL in starts, and was the ace of the Houston staff. He was also apparently a hell of a dresser back in the day, a big fan of two-toned platform shoes - I had a pair of those - which must have been a sight, since he was already 6'5". This photo is from Shea, in a city where that outfit would have been very much at home.

Jerry Reuss was drafted by the Cards out of high school in '67. He got a pretty decent bonus so he must have been a hot prospect. His parents also got a trip to Hawaii. He spent most of that year at Single A where he only went 2-5 despite posting a 1.86 ERA. He then moved up a rung each year, posting another fine ERA in '68 in Double A around some military time and then winning 13 in Triple A in '69 prior to his debut up top. In '70 he was cruising at Triple A - 7-2 with a 2.12 ERA - so the Cards pulled him up to the rotation. '71 was all St. Louis and though Jerry was a .500 pitcher during his time with the Cards, his ERA was a bit high partly because of some big walk totals. Following that season he was traded to the Astros for Scipio Spinks as Houston was looking for a lefty starter to go up against the improving Dodgers.

Reuss' first season in Houston was mixed. He had a big drop in wins but his ERA came in pretty nicely as well. After his much-improved '73 he went to the Pirates for catcher Milt May. His time in Pittsburgh resulted in mostly premium work to his prior seasons. In '74 he won 16 again and improved on nearly every stat outside of K's. In '75 he went 18-11/2.54 and was the NL starter at the All-Star game (he was 10-6 at game time). But away from the field things were pretty wiggy. He got fined for taking his wife on the road. He got fined for going to college. He got shot down when he asked to have a no-smoking section on the team bus (he was/is an asthmatic). After another good year in '76 (14-9/3.53) in '77 his numbers cooled off a bit and in '78 he was barely used, ending up in the bullpen by mid-season.

In 1979 Reuss was traded to the Dodgers for Rick Rhoden and took his place in the LA pen. While his numbers were nothing special in a sort of lost season for LA, he did get some starts and had a nice last few weeks, going 2-1 with a 1.23 ERA. In the off-season the Dodgers signed Dave Goltz as a free agent and Jerry was back in the bullpen to start the season. He did, however have a productive off-season himself in which, worried about losing some pop from his fastball, he visited Dr. Frank Jobe, of Tommy John fame. It turned out that the muscles on his left side had atrophied, apparently in part due to his asthma. Workouts helped him rebuild his muscles so when Goltz went down Jerry was able to take his rotation spot and fly. He would go 18-6 in '80 with a 2.51 ERA and a league-leading six shutouts to win the NL Comeback Player of the Year Award. He also fired a no-hitter. In '81 he went 10-4 with a 2.30 ERA and destroyed Houston in the divisional series. In '82 he missed throwing a perfect game by a first inning hit and again won 18. He would be an effective started for LA through '85. Earlier injuries took their toll the next couple seasons as he moved from LA to the Reds to the Angels, none of for whom he pitched well. In '88 he went to the White Sox as a free agent and had a nice season, going 13-9 with a 3.44 ERA. There he won his 200th game. The next year his stats took a hit and he moved to the Brewers. In '90 he signed with the Pirates organization and pitched for Triple A Buffalo. He was called up for a bit that season allowing him to be one of a handful of pitchers to throw in four decades. That was his last season and in the end he went 220-191 with a 3.64 ERA, 127 complete games, 39 shutouts, and eleven saves. In the post-season he went 2-8 but with a 3.59 ERA and a shutout in his eleven games. He also threw in two All-Star games.

In 1990 Reuss joined ESPN as an analyst for Angels games which he did for twelve seasons. In the early 2000's he did some coaching at various levels for the Expos, Cubs, and Mets. In 2006 he signed on to be the LA color guy. 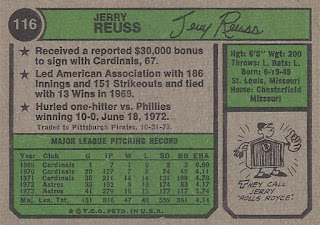 There's that informative little type again. That's a cute cartoon; Reuss is pronounced Royce. Even though he was from Missouri, Jerry was a self-proclaimed surfer dude. He looks it in his photo.