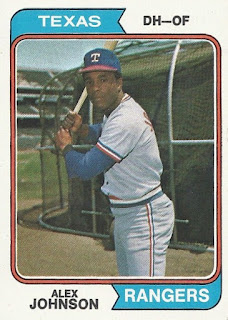 Now this one is going to be fun. This guy was such a source of controversy when he played that he has one of the more interesting bio's out there. Maybe his recent high profile was why the photographer took his picture behind the batting cages in Oakland, just to keep things on the down low. The thing was, though, that while Alex here generated quite a bit of press, he was sort of the anti-Reggie in that he rarely ever spoke. In his "Seasons in Hell" book, author Mike Shropshire, who covered the Rangers for three years beginning in '73, runs into AJ at the motel the team used in spring training and asks him what he thinks of his new team. The response, "Work is work. It don't matter where" was the longest interview Johnson gave during his nearly two seasons in Arlington.

Alex Johnson was a supremely talented athlete growing up in Detroit. When he graduated high school he passed up a football scholarship to play sandlot ball locally. From there he was signed by the Phillies in '61 and in the following three seasons rose from D ball to Triple A, hitting well above .300 at every stop. In '63 in A ball he put up a .329/35/128 season. In '64 he hit .316 with 21 homers and 71 RBI's in only 369 at bats, prompting a call-up which saw him hit .303 in 43 games. In spring training of '65 he was named the left fielder and certainly didn't disappoint with the bat. But he was already on the road to be anything from a perceived hardhead to troublemaker as he voiced his disapproval at being told how to play the outfield. In a more benign version of that story, a tip from Peanuts Lowry, a Phillies coach, helped Johnson save a win in Crosley Field, the Reds' old stadium. Crosley had a slope in the back of the outfield which could make it challenging for new outfielders to play. After the '65 season Alex went to the Cards in one of the trades in which St. Louis dismantled its '64 pennant-winner. There he clashed immediately with management and was sent down to Triple A Tulsa where he hit .355 with 11 triples, 14 homers, and 56 RBI's in 293 at bats. In '67 he returned and had a pretty terrible season for the Series champs, hitting only .223 in limited action. There the issue was the coaches trying to change his hitting and after the season he was practically given away to the Reds for Dick Simpson. For Cincinnati he had a fan as a manager - Dave Bristol had coached against him in the minors - and he rode a couple of .300-plus seasons to relative peace. In '68 he won Comeback Player of the Year, one of the instances in which I believe that award was not warranted (his '64 and '65 seasons barely add up to a whole one). But by the end of '69 the Reds had a surplus of fine hitting outfielders so Alex was traded to the Angels for pitching help.

In 1970 Johnson greeted his new league by winning the batting title, just beating out Yaz. He was developing a reputation for nonchalant fielding and lack of hustle on the basepaths but hitting .329 while leading the Angels to their best record to date salved an awful lot of critics. In '71 the Angels amped up their outfield, acquiring defensive specialist Ken Berry and power man Tony Conigliaro in a bid to win the division. But Jim Fregosi got a tumor on his foot, Tony C got headaches and had to quit, the pitching imploded, and Alex was only hitting at about a .270 clip. His blase attitude was pissing off teammates now, and one of them - Chico Ruiz - actually pulled a gun on him in the dugout. He got in a big fight with Berry and was finally suspended by his GM. Marvin Miller interceded and got Alex back in the lineup but the damage was done and after a .260 season he was traded to the netherland of Cleveland with Gerry Moses for Vada Pinson and others. For the Indians AJ's hitting continued to decline although, ironically, he did not get into any beefs with Gaylord Perry, a notorious baiter of perceived loafers. In March of the following year he went to Texas where he played outfield and DH, pulled his numbers substantially higher, and - outside of a nasty glance when asked to play the field - was pretty happy and mellow. He stayed with the Rangers through the bulk of the next season and in September of '74 was sold to the Yankees. He stayed in NY through the '75 season and was exclusively a DH. One of the things I was eagerly anticipating when I read "The Bronx Zoo" (thanks, Chris) was Sparky's take on AJ. To my surprise Sparky's only observations were that Alex kept to himself, avoided fooling around, and was always reading books on physics and electrical engineering. AJ was released that September by the Yanks and picked up in January '76 by Detroit. There he played one season as an outfield regular. I always wondered how he and Fidrych got along; Johnson loved kids and was surprisingly benevolent and cordial with them, so he and The Bird probably hit it off.

Johnson finished his career with a .288 average. He remained in Detroit after playing and completely divorced himself from baseball. He took over his father's truck business and was still at it in '98 when SI caught up to him (that link is here). From what I understand he is still at it. 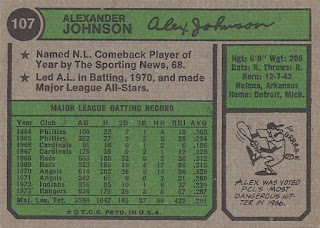 Another Mets legend makes this one easy: