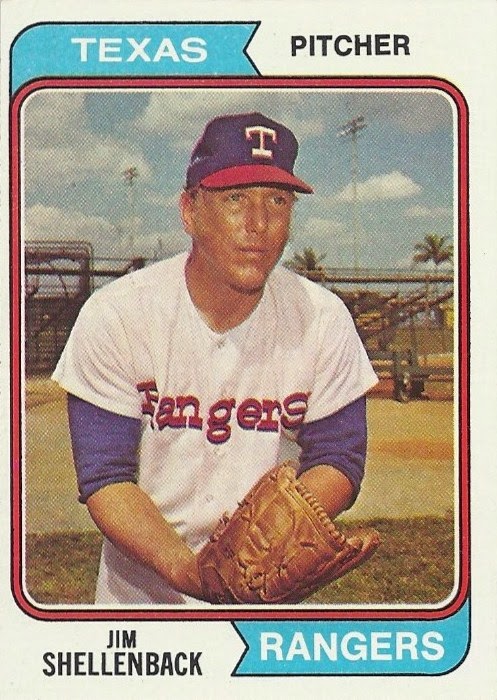 The book “Seasons in Hell” describes the Texas Rangers spring training site in Pompano Beach as about the ugliest complex ever ringed with palm trees covered with fungus. That looks about right in this final card shot of Jim Shellenback on what may be the mound. Jim has an impossibly long face which gets even more elongated by the placement of his eyes which are scrunched up way on his forehead (check out his ’70 card). ’73 wasn’t much of an MLB season for Jim, about whom we get no color in the above book. Pretty much all of it was spent in Triple A where, given the team’s dynamics, one would think his 13-7 season in the rotation and four shutouts would have made someone excited. But Jim was 29 then and his ERA was a bit fat at 4.31 and since Texas was in the midst of a youth movement for its rotation – both Jim Bibby and David Clyde were rookies – this Jim seems not to have had too many chips on his table. He’d get another couple shots up top, neither of which went too well. But like the former post subject, Adrian Garrett, Jim would come off his seldom-used MLB time into a super long coaching stretch.

Jim Shellenback was signed by the Yankees upon graduating Ramona High School in California – a school also attended by Steve Barber and Tom Hall in this set – in ’62. After a summer of D and C ball during which he went 1-5 with a 4.04 ERA but 57 K’s in 49 innings, Jim was selected by Pittsburgh in the first year draft. The Pirates moved Jim up to A ball where he had a very nice ’63: 17-3 with a 2.03 ERA and nearly a strikeout an inning. He continued pitching well the next few years, going 8-14/3.53 in Double A in ’64; 14-6/3.33 in a ’65 split between Double A and Triple A; and 11-13/3.09 with four shutouts in Triple A in ’66, the year he debuted for a few innings in Pittsburgh. He got his first rookie card in ’67, had a 7-10/3.16 season in Triple A and returned to a nice couple games in September, one being a complete game eleven-inning win over the Dodgers. But he then spent all of ’68 back in Triple A, partly as a recovery from a nasty car accident that broke his leg right after the prior season. He still had a pretty good half season, going 9-8 with a 2.85 ERA and a couple shutouts. In ’69 he got his second rookie card, started the season as a reliever for the Pirates, and knocked off some pretty good innings before a May trade had him in DC for pitcher Frank Kreutzer, by then a minor leaguer.

Shellenback joined the Senators and the team’s manager Ted Williams in what was a bit of an ironic twist. Years earlier Jim’s uncle Frank was Ted’s player-coach on the San Diego PCL team. Frank got props from Ted in Ted’s autobiography, “My Turn at Bat” and it had also been suggested that Frank was responsible for turning The Splendid Splinter from a pitcher into an outfielder during his PCL time, which may or may not have been the case. Either way, Jim would become more of a spot guy with Washington, getting eleven starts and a save the rest of the ’69 season for DC. In ’70 he had probably his best MLB season as he started 14 games and recorded a shutout. In ’71 all Jim’s numbers were pretty comparable to his prior season’s except his won/loss record which tumbled pretty hard. In ’72 he was pitching pretty effectively but with some bad luck when a shoulder injury took him out of action in early July for the rest of the year. '74 would work a lot like ’73 except his numbers weren’t nearly as good: a 5.48 ERA in 25 innings for the Rangers and a 4-4/3.78 season in Triple A. After that season he was sold to San Diego where he would spend a considerable amount of time the next two seasons in the Padres Triple A rotation, going a combined 17-11 with a 4.25 ERA and five saves. Then in ’77 he moved to Minnesota where he got some light work in Triple A – 2-1/3.90 with a save in 30 innings – and his final MLB work where he posted a high ERA in a few innings. That was his final season and Jim finished with an MLB line of 16-30 with a 3.81 ERA, eight complete games, two shutouts, and two saves. In the minors he went 103-82 with a 3.42 ERA.

Shellenback remained in the Minnesota system after playing as a pitching coach. In ’83 he served that role in Minnesota. He had an 18-year run for the team’s Class A franchise in Elizabethtown that ended with his retirement following the 2011 season. 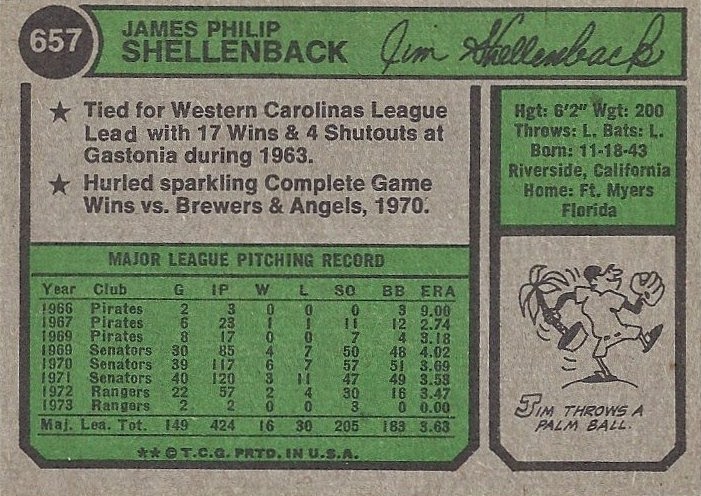 Jim has a nice signature, especially for such a long surname. His career came very close to ending after that ’67 car crash. Those two wins from the second star bullet were successive and took nearly a run off Jim’s ERA that season: He gave up six hits and two earned runs against Milwaukee and threw a two-hit shutout against the Angels. The info regarding his uncle Frank’s guidance in Ted Williams’ career came from Jim’s ’70 card. His uncle has a SABR page and was born in 1898, the youngest in his family. So Jim’s dad was up there when Jim was born, at least in his late Forties. It’s too bad he got no notice in the “Seasons in Hell” book since his surname minus the S dovetails nicely with the title: Jim had been to Hell and back. But that’s just a bad joke.

A Canadian helps big with this hook-up: