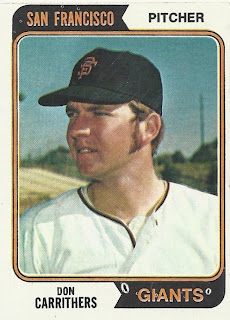 1973 was a pretty typical season for Don Carrithers. He started and relieved. He had a losing record and a high ERA. His strikeouts and walks ran neck-and-neck. He spent time on the DL. And that last bit was pretty much the problem. Don got hurt a lot - nearly every season - so even when things were going well for him it didn't last. About the only bad thing that didn't happen to him in '73 was that he avoided the minors. Here he gets a profile shot in the Arizona desert during spring training.

Don Carrithers was an all-county pitcher out of Lynwood, California when he was drafted by the Giants in '67. While he got off to a rough start that summer in Rookie ball - 4-5 with a 4.58 ERA - he did get a bunch of strikeouts, including 17 in one game. He had a pretty good pitch assortment - fastball, curve, and slider - and they all moved pretty good. In '68 he improved markedly at two Single A stops, going 13-6 with a 2.50 ERA and getting bumped to Triple A the following year. There he really hit a bump, going 3-12 with an ERA over 6.00. He fixed that in '70 when his 9-1 and 2.15 ERA at the same level earned him time up top. While he went 2-1 with a shutout in his first start that 7.36 ERA didn't impress anyone and he was back in Triple A to kick off '71. After going 7-3 in the rotation there in the first half he came back to San Francisco in time to participate in the pennant run.

Carrithers went 5-3 the second half of '71 as he spot started and relieved down the stretch. He saw some post-season work but didn't do too well, giving up 3 runs without getting an out. In '72 he would give up Willie Mays' first non-Giant homer and toss three wild pitches on the way to the DL with shoulder pain. Then after the '73 season he was sent to the Expos for fellow former California schoolboy star John Boccabella. The change in scenery helped as Don split the next two years between Triple A and Montreal. He went a combined 10-11 with a 2.40 ERA at the lower level and 10-5 with a 3.18 ERA up in Canada. When he settled in up top for all of '76, though, he didn't perform too well. While he threw 140 innings, by far his most in the majors, he went 6-12 with a 4.43 ERA and more walks than strikeouts. In the off-season he was sold to the Twins.

While some ex-Expos did well in Minnesota - think Mike Marshall and Jose Morales - Carrithers wouldn't be one of them. Out driving late at night with fellow pitcher Mike Pazik, they were struck by someone going the wrong way on a highway ramp and both required hospitalization. Don broke his leg and arm while Pazik broke both legs and they each missed the remainder of the season. Don would move back to the Giants organization where in '78 and '79 he pitched for Triple A Phoenix. He did OK but control issues persisted and after the '79 season he was released. He finished with a record of 28-32 with a 4.45 ERA, eleven complete games, three shutouts, and three saves in the majors and 60-50 with a 3.69 ERA in the minors.

While playing Carrithers had begun a roofing business in the San Mateo area of California. After the '79 season he returned to it full-time and even employed other ball players there during the '81 strike. He remained in the roofing business for at least the next 20 years. During that time he was also actively involved in the Senior Baseball League where he played principally for Sacramento alongside former big leaguers including Jim Barr and Ron Brand. 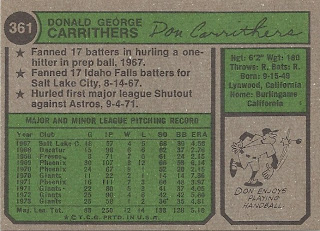 Don gets props for two 17-strikeout performances in '67, one in the pros. I didn't realize handball was a big thing on the left coast. I thought just NYC guys played it.

My guess is Don wasn't too successful against The Bull but let's get them together anyway: