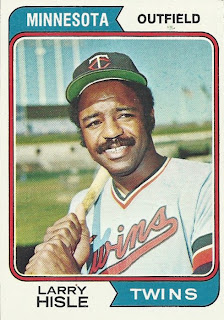 In a very odd and somewhat sad coincidence, Topps has given us the second of two cards in a row of players whose career ended due to the same physical ailment - a torn rotator cuff. Larry here enjoyed a bit of a longer run than that of Mr. Busby but he was knocked out in his prime as well. Larry is toting a big bat and an even bigger smile in Oakland and from research done for this post it seems his smile was pretty constant. Larry was pretty much universally liked so everyone was probably pretty happy to see him back in the bigs in '73. He took a long road back: three trades in a little over a year, time in both leagues and the minors, and finally putting in enough time up top to beat his rookie numbers for the first time in four years. He would also turn into quite a slugger the next five seasons so pretty soon the only people not smiling would be the opposing AL pitchers.

Larry Hisle was born and raised in Portsmouth, Ohio. His dad died when he was about a year old and his mom passed away from a kidney ailment when he was ten so he was actually an orphan. He was then taken in for a bit by a friend of his mom's before being adopted by a family, the Fergusons, who raised him through high school. There Larry was a big deal as a hoops star - he was all-state twice and all-American once - and baseball player and his senior year after averaging 25 a game in basketball and playing stellar defense as a point guard he signed a letter of intent to go to Ohio State on scholarship. Then the Phillies came along and really pressed Larry to go the baseball route and when they offered him too much cash to turn down he signed right when he started at OSU in August of '65. Since he was now a pro athlete he couldn't play hoops but he stayed in school - he'd been an honor roll student in high school - through his first year. That meant a late start to the '66 season but he made it work, hitting .433 with three homers and 13 RBI's in 20 games in A ball. In '67 he put in a full season at the same level and hit .302 with 23 homers. In '68 he jumped all the way to Philly and hit .364 before being sent back down to Triple A. There he hit .303 but his power numbers were compressed significantly because of a hepatitis infection. After resting back home in Portsmouth the balance of the season he returned to the Phillies for the next season.

In '69 Hisle was still feeling the effects of his illness but he was able to wrangle the starting center field gig and with 20 homers, 18 stolen bases, and a .266 average came in fourth in NL ROY voting and earned a spot on the Topps rookie team. He struck out a ton, finishing near the top of the NL with 152 K's. He also suffered a concussion running into the outfield wall trying to rein in a Wayne Garrett triple. In '70 his average slid a bunch but the strikeouts didn't and when in '71 the Phillies got a new rookie center fielder in Willie Montanez, Larry was the odd man out. Most of his time up top was spent on the bench and he spent the better part of the season back in Triple A where he hit .328 with nine homers and 30 RBI's in 186 at bats, but he also struck out 51 times. Since the Phillies thought they were now set in the outfield they dealt Larry to the Dodgers for Tommy Hutton and Hisle spent all of '72 in Triple A for his new team where he hit .325 with 23 homers and 91 RBI's and pulled his strikeouts down a bunch. Those numbers should have made someone excited in LA but they didn't - I would have loved to have seen him with Jimmy Wynn in the outfield for the '74 run - and after the season Larry was traded twice, first to St. Louis for a couple minor leaguers and then to the Twins, essentially for reliever Wayne Granger.  The Twins brought him up to take over center and he did the job. In '74 he cut back on the strikeouts a bit and upped his stats across the board to 19 homers, 79 RBI's, and a .286 average. Then in '75 he ramped things up significantly in the first half of the season by hitting .318 with eleven homers, 51 RBI's, and 17 steals before being shelved in July with a hurt elbow that necessitated an operation and ended his season.

In '76 Hisle got healthy and became one of the premier power guys in the AL. That year he hit .272 with 14 homers and 96 RBI's. In '77 he topped his prior season with a .302, 28 homers, and an AL-leading 119 RBI's. That season he spent a lot of time back home with his high school coach's ailing son who told Larry what his hitting goals should be. After the season he signed a big contract with the Brewers as a free agent and he continued his binge with numbers of .290, 34 homers, and 115 ribbies. Larry was an All-Star in both '77 and '78. Then in '79 came the fall. After a couple dings to his right shoulder the past few seasons he tagged it for real early in the season and missed the remainder of the year. It turned out to be a damaged rotator cuff and that was it for Larry. He attempted comebacks each of the next three years but he couldn't muster any more than 87 at bats in any of them. In early '83 he gave up the ghost and retired. He finished with a .273 average with 166 homers and 674 RBI's. He also stole 128 bases, more than twice as many as times he was caught. He had a .345 OBA.

After his playing career ended, Hisle took up one as a hitting coach. He started out in the Milwaukee system ('83-'89) and then moved to Toronto's ('90-'91), before coming up to the Blue Jays for four seasons ('92-'95). That means he spent a bunch of time with Cito Gaston, the subject two posts ago. During that time the team won its two Series and in '93 Larry was hitting coach to the top three hitters in the AL: John Olerud (.363), Paul Molitor (.332), and Roberto Alomar (.326). For the '96 season he returned to the minors for Toronto. In '97 former teammate Cecil Cooper hired him to return as Milwaukee's minor league hitting coach which he did through 2002. In '03 he began his current gig as a community rep which builds on the work he has been doing all along working with sick and troubled kids. He sounds like a pretty stellar guy. 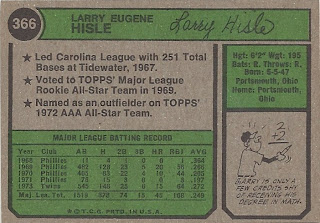 The second and third star bullets point out an interesting circumstance. Larry was named to the Topps Triple A All-Star team three years after he was named to the Topps Rookie All-Star team. I wonder how many times that one's happened? On the rookie team one of his teammates was Al Oliver, also a teammate of his in high school. That's another pretty cool double. I believe he continued going to Ohio State during his early career. I do not know if he ever finished.

So Larry gets to share his post with music news from the first half of April '74. The sixth was a pretty big day with new chart toppers in the US and the UK. In the States Blue Suede's partly comic rendition of "Hooked on a Feeling" took over on top. The song was originally a hit for BJ Thomas in '69. In the UK "Seasons in the Sun" by Terry Jacks hit the top about a month after it did so in the US. Also on that date ABBA won a big award in Europe for their song "Waterloo", expanding their renown (yuck). But there was better news. In California on that day the Jam Festival occurs with performances by Rare Earth, The Eagles, Deep Purple, Black Sabbath, Black Oak Arkansas, ELP, and Earth, Wind, and Fire. It is the first big gig for some of those bands. Lastly, Eric Clapton gets a party thrown for him in London by Robert Stigwood for whom EC has decided he will finally record again. On the 13th in the US Elton John hits the top with his latest Number One, "Bennie and the Jets", the latest chart topper from his huge double album "Goodbye Yellow Brick Road."

Larry keeps us in the AL so let's see if that helps for the hook-up: