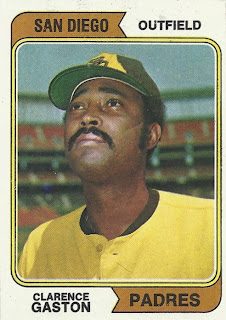 The second double card post in a row brings us to a star-gazing Clarence - later Cito - Gaston. Maybe he is looking back at his wonderful '70 season. Or maybe he's looking ahead at his World Series success in twenty years. Whatever he's looking at, he appears to be doing it at home in Jack Murphy Stadium. This would be the last year Clarence gets to show us his Padre threads on a card. In '75 he gets one of the all-time worst air-brush jobs for his trade to the Braves. '73 was a mixed season for Clarence. It was bad because he was still in San Diego and because even though his power numbers rebounded significantly from the year before, his average took a hit and by now it was apparent that his '70 numbers would never be repeated. It was good because it was his last season as a regular. In '74 the acquisition of Bobby Tolan and the continuing emergence of Dave Winfield would crimp his time in right field and eventually force the trade. And moving to Atlanta wasn't exactly a salve for all the losing. Clarence would just have to wait a while to be on a winner. 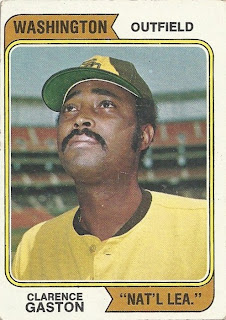 Clarence Gaston was born in rural Texas and moved around a bit before ending up at Holy Cross High School where he was a quarterback and a pitcher, as well as a hoops star. When he finished high school he began working as a truck driver - like his dad - and a garbage collector. He also played local work league ball at which he was spotted by a Braves scout and soon signed in '64. His start that year wasn't exactly meteoric as he hit .235 for a couple Single A teams with a homer. In '65 he fell to .188 at the same level. But in '66 he got inspired - his family was very religious - and hit .330 with 28 homers and 104 RBI's to win his A league's MVP award. It also earned him a late promotion to Double A where he continued to hit .300. At the latter level in '67 he kept it up and after a .305 season he got his look in Atlanta for a few games. In '68 he hit .273 between Double and Triple A. After that season he was selected by the Padres in a late round of the expansion draft.

In San Diego's first spring training camp, Gaston was seen as something of an unknown since his performance in the minors was sort of inconclusive. But over the winter he won the batting crown in Venezuela by hitting .383. He won the Padres starting center field gig but didn't put up terrific offensive stats. The next winter he again won the batting title - this time with a .360 - and when he returned to San Diego for the '70 season he brought his mojo with him. That year he had pretty much the best offensive line of a Padre - .318 with 29 homers and 93 RBI's - until Tony Gwynn came along. He was an All-Star that year. Then in '71 he had one of the biggest falls ever as his average plunged 90 points and his power tanked. Always a free swinger, the chink in his '70 armor was a high strikeout total of 142. His OBA cracked 100 points in '71. In '72 new acquisition Johnny Jeter took over center and Clarence moved to right. Jeter was a bust but Clarence's power kept sliding. In '74 he backed up in right and left as the new guys took over the regular spots. After the season he was traded back to Atlanta for Danny Frisella.

In '79 Gaston continued to play ball, first for the Inter-American League where he hit .324 before it folded, and then in Mexico where he hit .337 for Leon. He again played for Leon in '80 but his average tumbled a bunch and he retired. In '81 old roommate Hank Aaron got Cito a job coaching in the Atlanta system and in '82 Gaston moved to Toronto's. He was hitting coach of the Blue Jays in '89 when manager Jimmy Williams was fired with the team 12-24. Cito was asked to be the interim guy - he initially said no because Williams was a close friend - and took the team to a 77-49 finish. After that record Toronto dropped the interim from Cito's title. He remained as Blue Jay manager through '97, going all the way in '92 and '93, becoming the first black manager to win a Series title. After the team faded in the late Nineties he was released. He then took some time off although he interviewed for managing gigs in Cleveland, Milwaukee, and Chicago. He also maintained ties with Toronto, working informally as a hitting coach and also doing some admin work. In 2008 he again stepped in as manager after a medicre start, going 51-37 after the team started 35-39. He remained there through the 2010 season when he stepped down to be a consultant. His managerial record is 894-837. 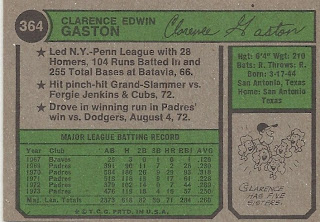 There's his first big season in '66 plus a couple game-winners in '72. The Cito name came from an old Mexican wrestler who was popular in Texas when Gaston was a kid. The cartoon is the same as on his '70 card so the girls all stayed healthy for three years. I find it hard to believe he never won Manager of the Year.

I'd love to do the hookup through Matty Alou or Horace Clarke but neither of them played much for San Diego. Then I remembered this guy: