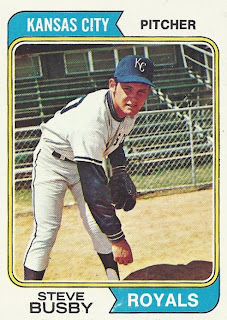 Now this guy was a hard-luck pitcher. Not when he was on the mound because that tended to go pretty well. It was off the mound this guy had problems, exclusively the medical kind. Back in '73 Steve Busby was just making his presence felt with his workhorse innings on the way to a short reign as staff ace. He is the final pitcher in the set to throw a no-hitter during the season, only his second, though he was technically still a rookie. In his next start against the Brewers he threw no-hit ball for six-plus innings, going the deepest to two straight no-no's since Johnnie Vander Meer turned the trick in '38. Outside that stretch he didn't have a great start to his season and he was 4-9 halfway through. But then he was a juggernaut, going 12-6 the rest of the way. He came in tied for third place for AL Rookie of the Year, although he got shut out on both the Topps and Baseball Digest teams to the NL guys. But for a couple years his star would burn the brightest of all those guys. Speaking of bright, this is one sunny spring training day on which Steve had his photo taken. The field looks like pretty much any town field that even I've played on. They really went all out back then, didn't they?

Steve Busby was an excellent high school baseball and football payer at Fullerton High School in California, the same school Walter Johnson attended. Steve was prone to injury and his senior year he hurt his knee in a football game. During his senior season in baseball in '67 the Giants drafted him but Steve injured the knee again in a  game and after San Francisco reduced his signing bonus a bunch he opted to go to USC. The expectations were that he'd do the double again in both football and baseball, but he got shut out in the former sport. He did go on to a nice baseball career - Brent Strom was a teammate the first couple seasons and Fred Lynn later - and was an All-American in '71 when he won the CWS title game. He was drafted that June by KC and this time he signed. He continued to kick butt the rest of the summer at Single A San Jose and then in '72 moved up to Triple A where he posted a losing record but with a nice ERA and continued with over a strikeout an inning. His pitches pretty much included only a fastball and a slider but he was able to mix up his speeds pretty well. By the end of '72 he was up in KC.

Busby had a nice short season in Kansas City in '72, going 3-1 in his five September starts with a 1.50 ERA. He also hit a grand slam in one of them that was called back because someone had inadvertently called time out (Paul Splittorf would later admit to being the culprit). In '74 Steve had a super sophomore season, going 22-14 with a 3.39 ERA. He made the All-Star team and threw his second no-hitter, again surrounding it with other hitless innings so that his streak again reached 15 innings. This time he set an AL record by retiring 33 men in a row between the two games. In '75 he went 18-12 with a 3.08 ERA, including a 12-inning complete game win against the Angels that many suspected of causing the injury - he later denied that - that pretty much defined the rest of his career: a torn rotator cuff. If that was the case the injury didn't really manifest itself until '76 when he had to have his shoulder operated on after going 3-3. The operation and its rehabilitation forced Steve to miss almost the entire '77 season - he threw one game in the minors - and mandated a slow comeback in '78. That year he had a couple good starts in Rookie ball but the results in Triple A - 3-7 with a 5.45 ERA - and in KC where he had an ERA above 7.00 were not so hot. In '79 he went 6-6 in twelve starts with a decent 3.63 ERA but his control was shot as he walked a bunch more guys than he struck out. In '80 he threw well in Triple A but again not so great up top. After the season he was released. He then signed with the Cards but he walked away. Steve finished with a 70-54 record with a 3.72 ERA, 53 complete games and seven shutouts. It's a shame since he seemed to be the real deal.

Around the time of his injury and then moreso in his retirement Busby got some radio work with the Royals. In '82 he began a 15-year gig with the Rangers where he provided both radio and television color commentary. He has done some broadcasting for Fox and other networks and since '98 has been running his own baseball school in Texas. There is a pretty lengthy interview with him from 2007 that is linked to here. 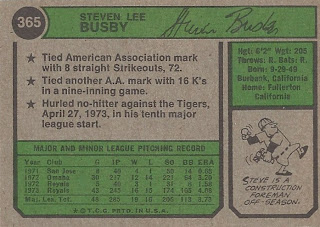 Busby was a streaky guy and promise was all over the place via these star bullets. I would imagine the construction work he did was back in California but haven't been able to confirm that. My guess is that the broadcasting gig was a lot more fun.

I'm going to catch up on the music news on this and the next post. I'll review '73 on this one. Both sides of the pond saw new Number One hits on April 7. In the States "The Night the Lights Went Out in Georgia" began a two week run. The song was sung by Vicki Lawrence who until then was more famous for being a cast regular on The Carol Burnett Show than anything she did as a singer. In the UK Gilbert O'Sullivan surprised people with his peppy "Get Down." His song enjoyed a two week run as well. O'Sullivan was the singer and author of the big '72 hit "Alone Again Naturally" which had a much more somber tone.

Gaston and Busby sounds like a law firm but let's get them together in baseball: