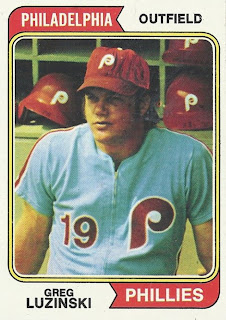 On the eve of the 2012 season we come to The Bull, who looks appropriately at home in a dugout somewhere actually away from home. Greg was one of the young guys who would help turn the Phillies franchise around from its moribund early Seventies ways. In '73 he continued his promising slugging, topping 90 RBI's for the first time and had a streak of five homers in five games. He also had a run of two games in which his shots hit the upper deck in Veterans Stadium, something which had only happened ten times total after he did it since the stadium opened in '71. It wasn't all good, though. Greg suffered a pretty nasty slump early in the season and by the end of May was only hitting .211 with 14 RBI's. Then after hitting well over .300 the rest of the way he got nailed in the face with a Bailor Moore pitch in late September that forced him to leave the game. But The Bull was back in the lineup the next day. Once Mike Schmidt got established in the year of this set, the two of them would have a few years of being a pretty powerful slugging duo. That's why Greg's resting up in the dugout.

Greg Luzinski grew up in the Chicago area where when he got to Notre Dame High School he was a 500-foot hitting catcher and a sought-after fullback/linebacker in football. He'd already signed a letter of intent to go to Kansas in the latter sport and when he was negotiating with a Phillies scout both USC and Notre Dame - the university - called to recruit him. That pushed the Phillies offer up to $45,000 and Greg signed as a first rounder in '68. That summer he hit 13 homers with 43 RBI's in 57 games of A ball for his first manager Dallas Green, who would also be his last manager in Philly. He also suffered a horrible beaning that put him in the hospital after blood started coming out his ear. The next year, again in A ball, he moved to first base while torching league pitching. He did that the next two seasons while moving up a rung each year. In '70 he got a short look up top and then in '71 hit .300 while backing up Deron Johnson at first. In spring of '72 he made the Phillies for good.

When Luzinski came up for good, Deron Johnson was still the man at first so Greg was converted to an outfielder. Never a premier defenseman he became the regular guy in left where good friend Larry Bowa could help him out by taking a lot of fly balls to shallow left. Philly was pretty awful in '72 and outside of Steve Carlton's magical year there were few bright spots. The Bull provided one when he hit the facsimile Liberty Bell in center field with a homer, a shot estimated to have traveled over 550 feet. After the big uptick in '73 his '74 season was pretty much killed when he tore a ligament in his right knee while chasing a foul ball. That put him out of action for a couple months and his power fell off to seven homers and 48 RBI's. But Greg would make up for that huge the next three seasons as Philly became a contender: from '75 to '77 he averaged .305 with over 31 homers and 115 RBI's in thee All-Star seasons. In '76 and '77 - his best season with a .309 average, 39 homers, and 130 RBI's - he helped lead the team to the playoffs. He would hit pretty well in those post-season games but famously dropped a fly ball in a loss to the Dodgers in '77. But that season, in a little-publicized move, he renegotiated his contract to have over $22,000 retained by the Phillies each year. The money was used each season to buy under-privileged kids tickets to Phillies games. In '78 he continued his All-Star ways by tagging 35 homers and 101 RBI's but the average fell to .265. That year was widely considered a slump and in '79 he showed up a bunch of pounds lighter. Then that year things got worse as leg ailments pulled the numbers down a bunch more - 18 homers and 81 RBI's. While there were some physical ailments, a telling stat - he hit .303 on the road and .187 at home - indicated that the always friendly Phillies fans booing were making an impact. Greg was viewed by many as the principal reason the club faded down the stretch. By '80 his knees were going south, he was losing starting time in left to Lonnie Smith and Greg Gross, and his stats all bottomed out: .228 with 19 homers and 56 RBI's in 368 at bats. After the Phillies won the Series he asked for a trade back home to Chicago where he could be a DH and rest his knees. He was sold to the White Sox the following March.

In Chicago Luzinski did DH and the rest impacted his stats nicely. In the strike year of '81 he boosted his average nearly 40 points and picked up across the board. In '82 he posted over 100 RBI's for the first time in four seasons and in '83 he hit 32 homers with 95 RBI's. Late in that season he put in some games at first base since the ChiSox were on the way to winning their division and there would be no DH in that year's Series. But the work in the field was short-lived after they lost to Baltimore in the playoffs. Greg returned for the '84 season, played out his contract, and retired. He finished with a .276 average, 307 homers, 1,128 RBI's, and a .363 OBA. In the post-season he hit .244 with five homers and twelve RBI's in 23 games.

Luzinski had done a nice job investing while he played which allowed him to step things down a bit income-wise and coach both baseball and football at his son's high school in Jersey, Holy Cross. His son was one of his successes and went on to play minor league ball for eight seasons. Greg coached there through '92 and then went to join old manager Tony LaRussa in Oakland from '93 to '95. He then coached with the Royals from '96 to '97 after which he relocated to Florida. Since then he has played golf on his artificial knee and has had an eponymous food concession stand at the Phillies new ballpark. 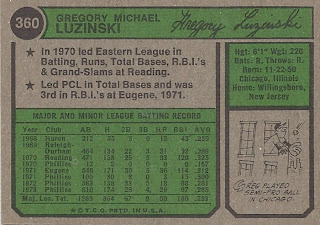 Greg gets some excellent star bullets about his time in the minors. The semi-pro ball was in the summer following his junior year in high school when he was only 16.