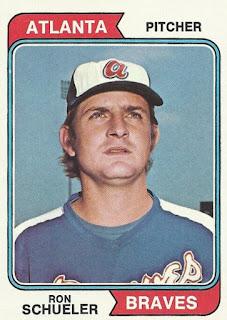 Almost every one of Ron Schueler’s cards was a variation of this shot: close up head shot with a serious, clenched mouth, and a far-away look. There is a pretty good chance this photo was taken at Shea and if so it may be before a pivotal game in the season for Ron – a two-hit shutout in which no Met got a hit until the bottom of the ninth. The whole season should have been pivotal for Ron: after doing a so-so job as a reliever – he was 2-3 with 2 saves and a fat 5.01 ERA through late June – he was put in the rotation to help ease the performance void left by the frustrating seasons of Roric Harrison and Gary Gentry. Ron did some nice work in his new role, winning his first start and adding another shutout to that Mets win down the stretch. He completed four of his games and went 6-4 the rest of the way with a 3.55 ERA as one of the Braves’ most effective starters during that run. His reward was a trade to the Phillies, memorialized by Topps with yet another serious far-off pose. On that card Ron looks like he’s in a wind tunnel in what I think is LA; maybe that woman behind him is hanging on for dear life. Ron would generally have a pretty frustrating career up top, hence the facial expression. But things would get a lot rosier success-wise after he finished playing so maybe those looks saw something ahead that was pretty good.

Ron Schueler grew up in Kansas where in high school he played hoops and pitched for both his school and in American Legion ball. Drafted in the 12th round by the Pirates after his senior year of ’66 he instead opted for school and went to nearby Fort Hays State University where he got in a year of basketball before being taken in the third round by Atlanta in the January ’67 draft. He finished his spring semester before starting his career off in A ball that summer where he’d have a mediocre season as a starter. It went that way most of the rest of his time in the minors. In ’68 he pitched at all levels between A and Triple A and his best numbers were in his two starts in the top spot. He had a pretty good year in Double A in ’69 when he pitched mostly in the pen and then had a tougher time at the same level in ’70. Both those years he did some military time as well as in ’71 when he posted good numbers in both Double A and Triple A. After a promising spring training in ’72 he was up for good. 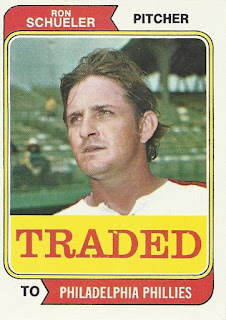 Schueler’s rookie year started nicely as he threw scoreless ball his first five relief outings. After that he became a spot guy, getting 18 starts and some long relief work and overall having a pretty impressive season. After his ’73 turn-around and his trade to the Phillies, he had his busiest year in ’74 when he had 27 starts among his 44 games and put up over 200 innings his only season. The problem for him was the non-starts and he wasn’t too happy that when the Phillies had bullpen issues they used him to fill the gap. He went 11-16 that year with a 3.72 ERA and in ’75 began the season working from the pen but his numbers weren’t too hot. Then he didn’t do too well when he did get a start, at least until July when the Mets helped out again by giving him a complete game win. He got a couple more starts and then some bullpen time but his innings cratered from ’74 and his ERA bumped up big as he finished with a record of 4-4 with a 5.24 ERA. ’76 began pretty miserably also but a nice stretch in the summer – including no earned runs for a month – improved his numbers a ton as one of the bullpen-by-committee role players and he didn’t even get a decision until his final game in September, finishing 1-0 with a 2.90 ERA in only 49 innings. In spring training of ’77 he was sold to Minnesota.

In his first AL season Schueler’s numbers came in somewhere between his ’73 and ’75 ones. He got seven starts among his 52 games and a bunch of finishes, but the lion’s share of his work was as a set-up guy for Tom Johnson, who took over as staff bullpen ace – and did pretty much as good a job – from free agent departee Bill Campbell. Ron went 8-7 with three saves and a 4.41 ERA. He then became a free agent and signed with the White Sox and had roughly the same kind of season as the prior one, though in a lot less innings. Part of that decline in work was due to a hand injury he suffered in July during one of his rare starts. After going 3-5 with a 4.30 ERA that year a poor start and lots of new young ChiSox pitchers contributed to his being used very sparingly in ’79, and not at all after early July. It was his final season and Ron finished his career with a 40-48 record, 13 complete games, eleven saves, and a 4.08 ERA.

Schueler immediately transitioned into his next professional role, that of coach, before the ’79 season was out, becoming the White Sox pitching coach. He stayed in that role through ’82 and then assumed the same task for Oakland from ’83 to ’84. After a season as a special scout for the A’s in ’85 he returned to coaching as the Pirates’ pitching coach in ’86. He then reversed things, returning to Oakland as a special advisor to GM Sandy Alderson (’87-’90), and then Chicago as the White Sox GM (’91 to 2000). He then reverted to the special assistant role with Chicago (2001-’02); the Cubs (’03-’04); St. Louis (’05-’07); San Francisco (’08-’09); and Washington (‘09-present). Baseball evidently turned out to be a good career choice after all. 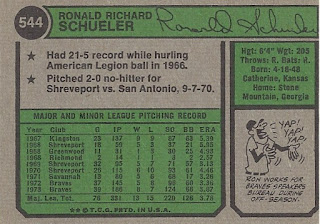 We get to see Ron’s American Legion record and his no-no in Double A in the star bullets. The cartoon indicates early access to behind-the-scenes stuff that would highlight his later career. 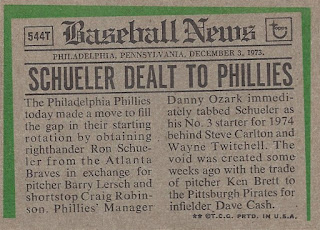 Topps gives us details about Ron’s trade. A big one they leave out is one from the Atlanta side in which the Braves actually thought they were acquiring Randy Lerch, a well-regarded heat-throwing 18-year old. That was the key reason they were willing to give up Ron, a pitcher with whom they were quite happy.

I wouldn’t have expected this hook-up but we get back to my favorite guy: