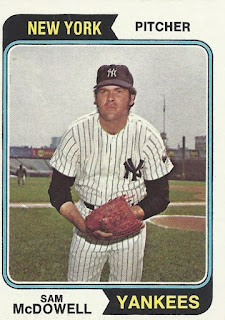 This is a photo of a 30-year old baseball player. Thirty year old guys could really emphasize that “old” part back then; I think Sam McDowell easily looks ten years older here. But Sam wasn’t helping himself with his widely publicized alcohol problem which was ramping up pretty significantly around the time this card came out. And ex the drinking ’73 wasn’t so hot a year for Sudden Sam anyway. ’72 was pretty much a bust as Sam was on the bad side of the big trade of him for Gaylord Perry and Frank Duffy as he only won ten while Perry won 24 to win the Cy. Then after a not great spring he only got three starts and 24 relief innings – with a couple saves – before he was sold in early June to the Yankees, who were pretty desperate for pitching help. Initially they got it from Sam as he went 5-1 with a 1.55 ERA in his first six starts for NY. But then things got ugly fast and from the end of July on he went 0-7 with a 5.89 ERA. At one point during Sam’s troubles he was diagnosed as bipolar, a condition he never believed he actually had. But sometimes his seasons sure looked like they were. Though he would pitch two more seasons up top after ’73 this is his final card.

Sam McDowell grew up a stone’s throw from old Forbes Field in Pittsburgh. A big kid he could always throw a mean fastball and his senior year of high school was pretty phenomenal: 8-1 with 152 strikeouts in 63 innings with three no-hitters and an ERA of 0.00. He won the state championship 1-0 by hitting a solo homer in a game he K’d 18 kids. By then he had a lot of scouts on his tail and he opted to go to Cleveland because the Tribe allowed him to start in the low minors and work his way up, which was a condition of Sam's and his parents prior to signing in 1960. So that summer he began his career way down in D ball where he went 5-6 with a 3.34 ERA, 80 walks, and 100 strikeouts in 105 innings. In ’61 he moved all the way up to Triple A where he went 13-10 but his ERA fattened to 4.42 as he walked 152 guys in 175 innings. But that didn’t stop him from getting a September start for the Tribe in which he memorably broke two ribs while throwing a strike, ending his season. In ’62 he broke camp up top but a fat ERA had him back in Triple A by June where he went 3-2 with a 2.02 ERA before returning to Cleveland in late summer. ’63 went pretty much the same: up top through June and then back to Triple A the rest of the season. That year he went 3-6 at the lower level but his ERA was still good at 3.41 and his K to BB ration of 84 to 50 – in 87 innings – was his best to date at any level. In ’64 a great start to his season in Triple A – 8-0 with a 1.18 ERA with five shutouts and 24 walks and 102 K’s in 76 innings and nine starts – got him a one-way ticket to Cleveland.

McDowell finally put together a nice string in Cleveland once he got there for the balance of the ’64 season, throwing a couple shutouts in his 24 starts and leading the AL in strikeouts per nine innings, a harbinger of what would come. In ’65 he had his first All-Star season as he led the league in strikeouts and ERA and K’d nearly eleven guys per nine innings with that Nolan Ryan-like total. In ’66 both Sam and the Tribe started off great guns – the Indians came out 10-0 – and on May 1 he was 4-0 and just off two consecutive one-hit shutouts. But back then manager Birdie Tebbets called all of Sam’s pitches and nearly every one was a heater and Sam’s shoulder began hurting. It took him over a month to get his next win and he would miss long stretches of the season and get not much run support. Though his innings dropped by nearly 100 he still led the AL in strikeouts and with five shutouts. Then ’67 got a bit messy. Tebbets had to retire following a mid-season heart attack in ’66 and new manager Joe Adcock wasn’t so hot at calling pitches. While Sam’s innings picked up a bit, his control suffered and his homer totals climbed for him to an unusually high amount, pushing his ERA up by about a run. But things would change in a good way the next year.

In ’68 the Indians named Alvin Dark manager and one of Dark’s first tasks was to let McDowell know that Sam and his catchers would decide which pitches he threw. That may or may not have happened, depending on the source. But Sam did for sure start mixing up his pitches more and the results the next few years were quite good. In ’68 he returned to a winning record while posting his lowest ERA and beginning a three-year run as the AL strikeout leader. In ’69 his ERA shot up but was still tons better than league average and in ’70 he won 20 while again eclipsing 300 K’s in what may have been his best season. It certainly had its moments, like when Sam played second base for part of an inning so a reliever could throw to his nemesis Frank Howard, and Sam could return to the mound after that one at bat. Unfortunately during that time his drinking was also ramping up and that level of success would be short-lived. Dark was generally in charge of trades and salary negotiations by then and Sam had claimed he was entitled to some bonuses for his ’70 performance that he was never paid. So he held out during the spring and wasn’t too happy with Dark, though he did sign another bonus-driven contract. But he began the season 0-4 and then things got wiggy. Oakland wanted Sam and offered six players for him but Dark never responded. Then commissioner Bowie Kuhn outlawed all the incentives in the Cleveland contracts, including Sam’s. Then Dark got booted right after he wouldn’t allow Sam to pitch in the All-Star game because of more shoulder pain he’d been experiencing. Sam got fined for being “rowdy” – read drunk – on a team charter and in August declared his contract null because of the cancelled incentives and went back to Pittsburgh for a couple weeks. He returned but after improving his record to 11-10 with a 2.98 ERA when he walked, he only went 2-7 the rest of the way. That November he was traded to San Francisco for Perry and Duffy.

Prior to the ’72 season McDowell had acupuncture for his shoulder and the immediate results were pretty good as he started the season 5-0 with a 2.57 ERA. But then the shoulder pain returned and in June he was smashed on his pitching hand by a come-backer. He was still 8-4 at that point though his ERA had climbed a couple runs. But in early July he went on the DL for over a month for his shoulder and the end numbers weren’t too hot. After his up and down ’73 the following season resembled the downside a lot more than the up as Sam, now bedeviled by a bad back, went 1-6 with a 4.69 ERA in only 13 games. He was busted for a DUI during the season and basically quit in early September to protest his lack of use. Released in January he went to spring training with Pittsburgh in ’75, had a decent camp, and pitched well in his few games, going 2-1 with a 2.86 ERA out of the pen. But the Pirates had too many lefty relievers and mid-year he was released to make room for Kent Tekulve, ending his time as a player. Sam finished 141-134 with a 3.17 ERA, 103 complete games, 23 shutouts, 14 saves, and 2,453 strikeouts – 35th all-time – in 2,492 innings. He made six All-Star teams and ranks tenth all-time in strikeouts per nine innings.

McDowell had a rough time of things after playing. He’d gone to school part-time during off-seasons and initially did insurance work. But his drinking got nasty bad the latter half of the Seventies and he did rehab. He also changed his degree program to counseling and psychiatry in order to help him evaluate and deal with his alcohol issues. By the early Eighties he was lecturing and counseling kids and shortly thereafter founded Triumphs Unlimited, an entity through which he began counseling MLB players. He did that a bunch of years, both through the leagues and through individual teams, and eventually moved onto other sports as well. In the mid-2000’s he relocated to Florida where he established a retirement community for ex-professional athletes. 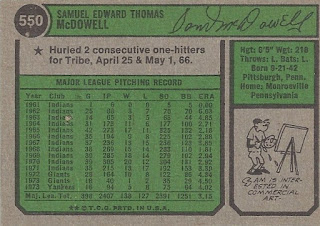 Sam gets a special card number for his final one. His painting pursuits made other cards as well. He was supposed to be a super nice guy away from the booze and in “The Curse of Rocky Colavito” – from where much of this information came – there are some amusing stories about playing in the field behind him. Apparently he had a fondness for challenging hitters he knew he could get with his fastball – like opposing pitchers – with other pitches, sometimes to disastrous results.

This exercise would have been a piece of cake with Sonny Siebert: