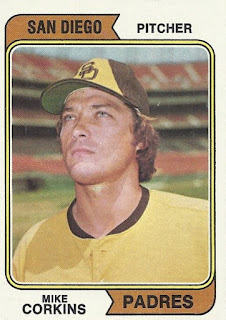 Mike Corkins gazes skyward at Jack Murphy Stadium in San Diego. If he was looking for answers as to the state of his baseball career he likely didn’t get them since this was his final card (two of those in a row has been pretty rare). Mike was not a bad pitcher, just more a hard luck sort whose rare publicity during his time in San Diego – his only time up top – was negative. Just check out his appearance in Jim Bouton’s “Ball Four” or his being the pitcher of record for Willie Mays’ 600th homer. But that was about the norm for any Padre in the early days. Plus as a designer you had to love the clash of that Padre yellow and those light blue eyes. Sometimes they could be a bit much, as Night Owl makes plain on his recent ’71 set post (but his rookie card’s even worse). Mike’s ’73 was sort of a discount to his ’72. He got some early-season starts but after going 3-4 with and ERA around 6.00 through May he was moved to the pen where his numbers didn’t improve too much until some nice middle inning stuff around the end of the year. His control went south – he came in second in the NL in hit batters – and he finished with three saves. By the time this card came out he was fighting for staff time and pretty much on his way out. Still, if his Facebook page is any reflection, things turned out pretty well for Mike in the end.

Mike Corkins grew up in Riverside, California, where in ’64 he went 16-0 his senior year at Robidoux High School. He was signed that summer by the Giants and the following summer took his big fastball to A ball where despite a high ERA he went 11-9 with 144 strikeouts – and 114 walks – in 124 innings. That pretty much would set the tone for his time in the minors. In ’66 around his military time he had 59 K’s and 66 walks in 62 innings split between A and Double A (he was better at the higher level). In ’67 it was all A ball as he went 7-13 with a 3.70 ERA and 187 strikeouts in 151 innings. In ’68 he brought those numbers – almost – to Double A where he went 8-12 with a 3.40 ERA and 140 K’s in 143 innings. Both years he compressed his walk totals a bunch. After that season he was taken by the Padres in the expansion draft.

In ’69 Mike went to Double A for San Diego and put up very similar numbers to his prior season, going 8-14 with a 3.76 ERA and 125 strikeouts in his 127 innings. He was promoted to the Padres in September and his first game against Houston prompted the “Ball Four” reference. A couple weeks later he gave up the Mays shot and it was a tough debut month. In ’70 Mike had a much better time. His ERA was a bit high on too many walks and too many homers but his control was better and he was on a pretty good roll when in late June he experienced a nasty groin pull and went down for the season except a few games of rehab in Triple A (3-1 with a 1.29 ERA and 35 K’s in 34 innings). In ’71 he continued the rehab in Triple A where he went 8-8 with a 4.63 ERA and 134 strikeouts in 138 innings. He got back to San Diego in September and in limited work put up pretty much his best streak up top. ’72 was all Padres when after a nice string of relief work – 0-2 but with three saves, a 2.52 ERA, and 29 strikeouts in 34 innings he moved into a spot role, getting eleven starts the rest of the season and finishing with by far his best numbers which included six saves. His highlight to the ’73 season may have been some of his work on offense – he hit three homers that year in only 33 at bats. In ’74 his innings moved down to 56, his ERA up to 4.79, and he finished the season in Triple A. He moved to that level for the Angels in ’75 but after a few innings there he was done. Mike finished things with a record of 19-28 with a 4.39 ERA, five complete games, nine saves, and a .202 average with five homers for his career. In the minors he finished 49-66 with a 4.13 ERA and 851 strikeouts in his 819 innings. He hit pretty well there also, with a .214 average and seven homers.
Corkins seems to have resided for a while near his Rialto home in Southern California. At some point he relocated to Lake Havasu, Arizona, where he appears to have a law practice. As mentioned above he has a real Facebook page, with lots of smiling photos, including a few from a few years back when he appears to have bulked up a bit. 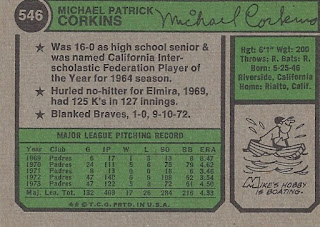 There is Mike's big senior year statistics. On a prior card Topps attributed that record to a college team but Mike didn't play ball at that level. Given his later perceived career, though, he seems to have caught up on his schooling at some point. The Braves were a tough team to shut down back then. Mike's card back is a tad off center.

For the hook-up we’ll use the guy either traded or not traded for Conigliaro: