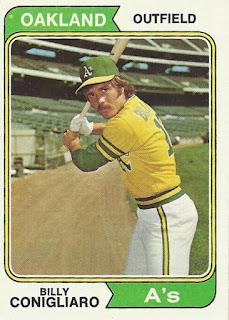 The 1973 season began pretty well for Billy C. Finally acquired legitimately by Oakland – initially he was traded for Oscar Brown in June of ’72; then he wasn’t because he was on the disqualified list due to his retirement; then in November he was again as a free agent away from the Brewers; and finally in February he was reinstated on the Brewers roster and sold - a good training camp led to his winning the starting center field job from Angel Mangual and other new guy Billy North. By late April he’d started there in ten of the club’s first 14 games and was hitting .300 when a hard slide into second pinged his knee a bit and he sat a few games. He returned to do some pinch hit work but by early May it was evident something was seriously wrong and he went under the knife to repair some damaged cartilage. By the time he returned in July North had taken over in center and though this Billy got some turns in left his hitting was still affected by his tender knee. Here he poses in Oakland for what would be his final card. By the likely time of this photo his average was crashing and the fun April was far behind. He’d get some playoff and Series time and then undergo more surgery to do further repair work on his knee. He wouldn’t make it out of spring training in ’74, though, his roster spot ostensibly taken by Larry Haney, when in reality he was probably dropped to clear room for Herb Washington, Charlie O Finley’s newest pinch runner. In the end, just like with his brother Tony, injury derailed a promising career. At least he got a ring out of it. And a long happy life. Those two things eluded Tony.

Billy Conigliaro grew up in Lynn, Massachusetts where he was, like his brother, a pretty big deal football and baseball star. At Swampscott High School he was a halfback, pitcher, and outfielder. Sought after by a bunch of D-1 schools for the former sport he opted to sign with the Sox when they upped his bonus to $60,000. Generally regarded as a better fielder and faster runner than Tony but with not as much power, he hit .272 that summer in A ball. The next three seasons he lost time to the military and injuries. In ’66 he flopped a bit in Double A - .226 with 24 RBI’s in 82 games – but hit .313 in a few games back in A ball. In ’67 he only got 124 at bats between his late reporting and a broken hand and hit .274 but with 29 RBI’s in A ball. In ’68 he put up a 7/41/.238 season in Double A. His brother’s beaning in ’67 caused Tony to miss the balance of the season and all of ’68. In ’69 Billy had a super spring training, hitting north of .400 and Tony was finally ready to come back so the long-sought Conigliaro brothers outfield seemed ready to occur that season.

Going into ’69 spring training the initial thought was that Billy Conigliaro would take over his brother’s old spot in right field. Initially that seemed workable because with the loss of Joe Foy at third base to expansion, George Scott was moving to that position and Carl Yastrzemski was taking over first base. That left Billy, Reggie Smith, and other newbie Joe Lahoud the three outfield spots. But when Tony C returned earlier than expected there were suddenly four guys to share space. Billy ended up getting some starts in right and center – his natural position – to open the season and he continued his spring training onslaught, hitting .313 through early May. But for a non-power guy he was putting up a few too many K’s and with Tony having a nice comeback and Lahoud better in the power department, Billy became the odd man out. In early May the Sox picked up Don Lock from the Twins and Billy got sent to Triple A. There he had a nice year and did show some power, hitting .298 with 13 homers and 81 RBI’s before returning to Boston in mid-September for some reserve work and an occasional start at both positions. While he hit pretty well average-wise he also recorded 23 K’s in his 80 at bats. In ’70 Lock was gone and while Tony continued his comeback in right, Billy won the starting job in left with another hot spring and this time Lahoud got shut out a bunch. Billy had a mostly unfettered rookie year and his numbers were good enough to win a spot on the Topps Rookie team. While Tony posted his best year, the Red Sox powers-that-be were not totally convinced that his eyesight was back long-term and they took advantage of his big numbers to trade him to California. The Conigliaro brothers were not shy about expressing their opinions and Billy let the world know that the reason for Tony’s departure was a conspiracy headed by Yaz and Reggie Smith to get him out of town. The locker room in ’71 became pretty hostile and while Billy had a nice start to the season – he was hitting over .300 through May and was at the top of the AL in doubles after being moved to center -  his caustic attitude and open opinions began eating away at his playing time. In August he hurt his ankle which impeded his swing the rest of the year and his at bats and RBI’s declined, though his doubles totals remained high. After the season he was part of the big trade with Milwaukee in which he, George Scott, Joe Lahoud, Jim Lonborg, Ken Brett, and Don Pavletich went to the Brewers for Marty Pattin, Tommy Harper, and Lew Krausse.

When Conigliaro went to Milwaukee he claimed he was finally free of both the conspiracy boys and of his brother’s domineering shadow. He had another good training camp and began the season as the team’s regular guy in right. But he came out slowly and didn’t get above .200 until late May. Still, Milwaukee showed a lot of patience and Billy was still starting most games through mid-June. But in a double-header towards the end of the month he saw that old nemesis Joe Lahoud – who’d also come over in the big trade from Boston – was penciled in the line-up and Billy C packed up his bags and left, retiring to return to Boston to work in a couple of businesses he and his brother had purchased. The Brewers had no idea what was going on and shortly after they arranged the initial Ollie Brown deal and then found it was voided because they also put Billy on the disqualified list to clear space. When things finally got cleaned up Billy landed in Oakland, had his brief season and was then done. He had a short comeback in ’77 when Charlie O invited him to spring training in the wake of all his free agent losses. Billy did well enough in camp to be offered a Triple A contract but he balked at a return to the minors and that was it. So his stats on the back of his card are his final ones up top. He went hitless in four post-season games and hit .264 in the minors.

Conigliaro’s time after baseball was certainly not uneventful, and a lot of tragedy was involved. While still playing in Boston he and Tony had purchased a couple business interests: a Ramada Inns franchise that was expanding in New England; and a golf course club on the water in Massachusetts. Billy and Tony were both active in their management from about ’72 on and at some point the golf club morphed into a lounge. Billy was also an avid photographer and he began his own photography business. In ’76 he made news when he was indicted for an assault at Tony’s club but nothing came of that. In ’81 he lost his house to a fire but the big tragedy came in ’82 when he was driving Tony to an audition for a local announcing gig. Tony had been having physical issues on and off since his beaning and on that trip he suffered a debilitating heart attack. He was rushed to the hospital and was in a coma for a while. He recovered a bit but never fully and he had to be in pretty much permanent care either at home or in hospitals until his death in ’90. While spending a big part of that time helping care for his brother, Billy also continued to run the brother’s businesses and opened a camera store. In the Nineties he moved into home renovation and got his contractor’s license. In 2002 he got married for the first time and shortly thereafter began to reconnect to baseball, since then appearing regularly at card shows and other events on behalf of the Sox. 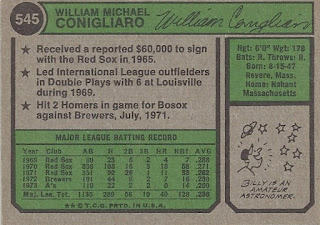 Billy gets some color in the star bullets and cartoon. A big ladies man while playing and presumably after he would get about 25 letters a day from female fans during his career. Topps gives him a 5 card which is an awful big stretch for his recent work.