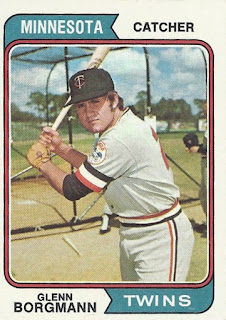 Here is yet another Twin posed by a batting cage. I suppose the shot is appropriate enough since the Twins back then were always one of the best-hitting teams in the AL That Glenn Borgmann is one of the subjects at this spot lends more credence to it being a spring training site since Glenn’s appearances up top in ’73 were pretty rare. He spent nearly the whole season in Triple A as the Twins reverted to their tandem of Phil Roof and George Mitterwald behind the plate. He had a good year at both levels, making his league all-star team in Triple A while posting no errors in his games behind the plate up top. By the time this card came out Glenn was in his first season as the regular guy behind the plate after the quick burn-out of Randy Hundley, who was acquired for Mitterwald. ‘74 would be his best season up top and before long he would return to a reserve role. But he was always a go-to defensive guy and he’s from Jersey so ya gotta love him.

Glenn Borgmann was a big football and baseball star growing up in Paterson, NJ, and hit over .500 his senior year. After graduating in ’67 he went to baseball factory Miami-Dade where he had a good enough freshman/ junior year that he was drafted in the sixth round the following winter by the Giants. Glenn passed and returned to the school where he was a JUCO All-American his sophomore/senior year. He was drafted that June by Pittsburgh in the second round but again the money wasn’t good enough so he passed to go to the University of Southern Alabama. The rumor back then was that the school had indicated it would arrange for Glenn to be drafted to a high bonus but that wasn’t true. Glenn went to the school because its coach was Eddie Stanky, former New York Giant, and Glenn wanted to play for him. His senior year Glenn had a bang-up season, hitting .460 with 19 doubles, 15 homers, and 66 RBI’s, all school marks back then, and was again an All-American. He was selected in the first round by the Twins and this time signed. A ball wasn’t too much of a challenge for him that summer - .352 with a .474 OBA in 55 games – and he finished the season with good power and perfect fielding in Double A. In ’72 an excellent half-season in Triple A got him to Minnesota in July. He played good D the rest of the year but his hitting was a bit light and in ’73 it was mostly back to the minors.

Prior to the ’74 season the Twins swapped starting catchers but new acquisition Randy Hundley was pretty much done and so Borgmann stepped in as the starter. He had a pretty good season offensively, hitting .252 with 45 RBI”s in his 345 at bats, but shone defensively as his .997 fielding average led all AL catchers. In ‘75 he returned as the number one guy and while he upped his caught stealing numbers to 43%, his average slumped to .207 and his RBI total to 33 in pretty much as many at bats, though his doubles totals shot up. In ’76 Butch Wynegar was the new hot catcher in training camp and at only 19 years old he wasn’t going to sit too much. Butch had a great first year, making the Topps Rookie team, and Glenn moved to back-up and late inning defensive work. He did a nice job in that role, hitting .246 with a .417 OBA in his 65 at bats, and in ’77 was having pretty much as good a year - .256 with a .407 OBA – when he went down in June after being spiked at the plate in a nasty slide by Hal McRae. He only got into two late season games after that one. In both ’78 and ’79 Glenn continued his role and while he got over 100 at bats the former year when Wynegar slumped, both seasons he hit just north of .200. In ’78 he led the AL by gunning down 49% of would-be base stealers. After the ’79 season he went to the White Sox as a free agent. There he hit OK - .218 with 14 RBI’s in 87 at bats – and again fielded nearly flawlessly as he had no errors and threw out 48% of attempted base stealers. But it was yet another year of back-up work – mostly to Bruce Kimm – and was coupled with half a season in Triple A where he had a nice year, hitting .315 with six homers and 36 RBI’s in 213 at bats. He’d only signed a one year contract with Chicago and again he left as a free agent. This time he signed with Cleveland but after a few Triple A games for the Tribe he was done. Glenn finished with a .229 average with 16 homers and 151 RBI’s up top where he also fielded at a .989 clip and threw out 39% of attempted runners, both premiums to his peers. In the minors he hit .303 with a .409 OBA.

After playing Borgann returned to New Jersey where for about 20 years he worked in auto parts distribution and for about the past 25 years has worked at the Meadowlands. He has a recent interview by a Twins fan linked to here. 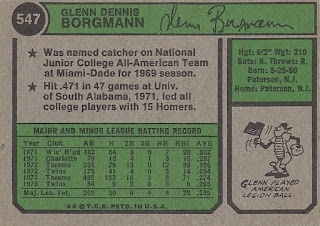 Glenn gets the college props for his star bullets. His senior year was pretty much a blip power-wise and he picked up the handle Baby Bull for his numbers. Glenn was part of an interesting draft that year. Selected ahead of him were pitchers Pete Broberg, Burt Hooton, and Steve Rogers, all of whom have cards in this set. Also selected in the first round were Archie Manning and Joe Theismann, both of whom would go on to bigger and better things in a different sport. Glenn would have another good star bullet in a couple seasons: in ’76 he started a triple play off an attempted bunt.

This one is a bit longer than recent exercises but I haven’t been able to conjure up a shorter route: