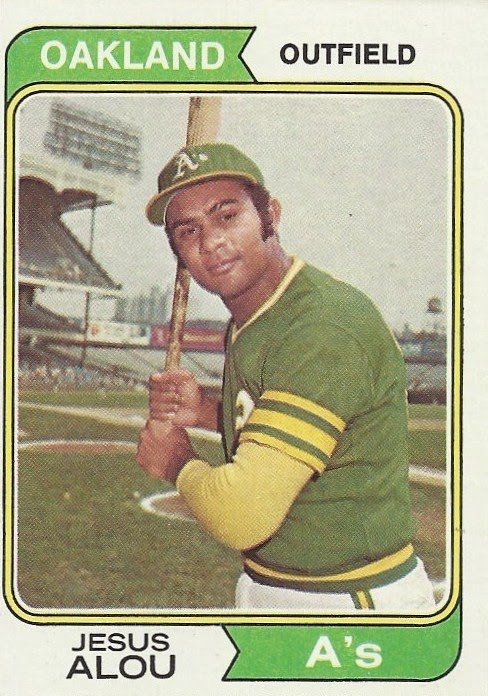 The next card shows a placid guy in a placid setting – Yankee Stadium during early August, the only time Oakland was in town after Jesus Alou’s mid-season trade from the Astros. Jesus’ playing time had been in decline mode since early ’72 and most of his plate time during early ’73 was in the pinch. He started well enough in his limited role – he was hitting .409 by the end of May – but a June and July slump nearly halved his average and in early August he was sold to the A’s. In the AL his timing was actually quite good since he got lots of starts in left field the next month-plus due to an injury to regular Joe Rudi. Jesus did a nice job, too, posting a .300 average though he would continue to be the opposite of “the Walking Man” by putting up only two BB’s in his 100-plus at bats. Then Billy North got hurt right before the playoffs and Jesus took his spot in center, getting serious post-season time for the Series winners. That little smile on his face in the photo was there for a reason.

Jeses Alou was the youngest of the baseball-playing brothers and Jesus wasn’t really a fan of the game, much preferring soccer back in the DR. But he would be big, topping out at 6’2” and he got talked into giving pitching a shot by the guy that signed his brothers and he did well enough to get signed in late ’58 by the Giants, again following his brothers, Felipe and Matty. His first year he remained in the DR and threw batting practice for the Escogido team in winter ball – he was only 16 – before he got a short look in D ball in the summer of ’59. He didn’t throw too well and later he hurt his arm so that pitching career ended pretty fast. But the kid could hit and in D ball the next summer he did just that, posting a .352/11/91 line with 102 runs and 18 stolen bases before posting the same average a few games in B ball. In ’61 he stuck at the higher level and produced a .336/10/71 line. While he was hitting well his arm was still a bit of a liability from the injury and he would have some tough times in the outfield, regularly being near the top in errors. But he did continue to hit: in ’62 his line was .343/11/68 in Double A with 24 steals and his personal best .376 OBA; in ’63 in Triple A he put up a .324/11/69 line while stealing 18. Late that summer he made his debut in San Francisco.

That little bit of time Jesus Alou had up top in ’63 would be his only shot at playing stateside with his two brothers. Prior to the ’64 season, Felipe was traded to the Braves, and Jesus took over his spot in right field. There he cut down on his errors significantly and had a pretty good rookie year offensively, though it ended early when he got spiked and missed the last month of the season. He had a marked upgrade in ’65 but then in ’66 an early-season slump had him on the bench and then back in Triple A for a couple weeks in June. It seemed to have done the job as he raised his average over 30 points the rest of the way and then had a ’67 very similar to his ’65. In ’66 he began moving between both outfield corners which he would continue doing the next few seasons. In ’68 Jesus had a tough follow-up year while posting only nine walks and dropping some points off his average though it was still well ahead of the NL norm. After seeing the success of his brothers after departing Candlestick he’d been asking – quietly – for a trade as well the past couple seasons. Following the ’68 season he got his wish, soft of, when Montreal took him in the expansion draft.

Alou’s time with the new Expos was quite short and in January of ’69 he left via a trade with Donn Clendenon to Houston for Rusty Staub which got controversial when Clendenon refused to report to his new club (he didn’t want to play again for Astros manager Harry “The Hat” Walker). Eventually Donn was replaced by Jack Billingham and Skip Guinn and Jesus proceeded to sort of bottom out offense-wise with his new club that really hit the skids after he busted his jaw in a collision with shortstop Hector Torres and missed six weeks in the summer. The bright spot, though, was that much like ’66 he returned with better numbers, hitting .285 the rest of the way. In ’70 Jesus rode the pines a bit to start the season as new kid Cesar Cedeno pushed other guys around in the outfield. But Jesus got back his corner spots with some nice hitting and by year-end posted his best full season average. He retained his spots in ’71 on a hot start that cooled off a bit. By ’72 Bob Watson was getting too good to leave out of a regular spot and so Jesus became a bench guy though he did an awfully nice job in that role that year.

Alou remained in Oakland in ’74, spending most of his plate time in the DH role, and posting a .268/2/15 line in 220 at bats. He got limited post-season action that year but did pick up another ring. In spring training of ’75 he was released and picked up shortly thereafter by the Mets. With NY he did some reserve outfield work and pinch hitting and had a .265 average with eleven RBI’s in just over 100 at bats. Again released in spring training, this time Jesus decamped full-time to the DR where he played winter ball and tried to start a business manufacturing watches. When that enterprise didn’t get off the ground he returned to The States and Houston and in ’78 had a nice little comeback season, posting a .324/2/19 in 139 at bats as a reserve left fielder and pinch hitter. After a reduced role in the same spots in ’79 he was done. Jesus finished with a .280 average with 32 homers and 377 RBI’s. In the post-season he hit .222 with four RBI’s in 13 games.

Alou continued to play winter ball in his home country through the ’80 season and finished a 20-year run there with a .302 average. He then managed a bit, but in ’82 returned to MLB land as a scout for the Expos. He then moved on to the Marlins in the same role and in 2002 he became the director of Dominican League scouting for the Red Sox. 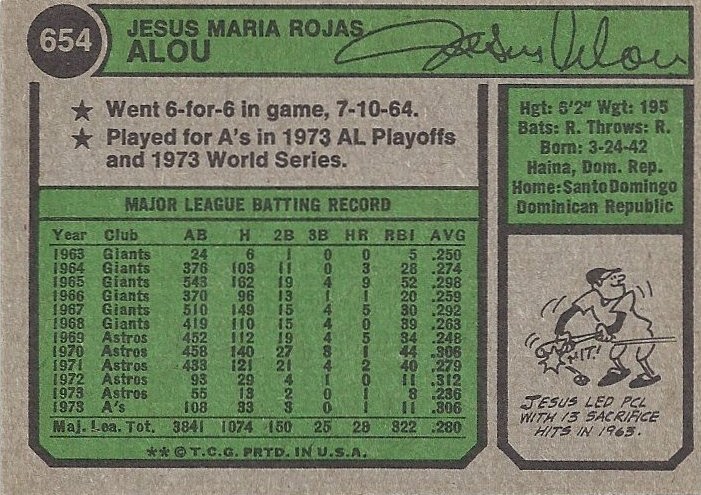 The Alous were unusual in that they didn’t have that parenthetical thing going with their name. Had they, the Alou would have been the name in parentheses since that was actually their mom’s family name. The true family name was Rojas. That was a pretty big game for a rookie. Jesus only had a .305 OBA which is pretty much the smallest differential I have seen in this set. He really almost never walked. Good trivia question: outside of San Francisco, for which team did all three Alou brothers play? See the front of the card. Jesus has a SABR bio.

These guys were Astros together in ’72 but neither had enough at bats that year: