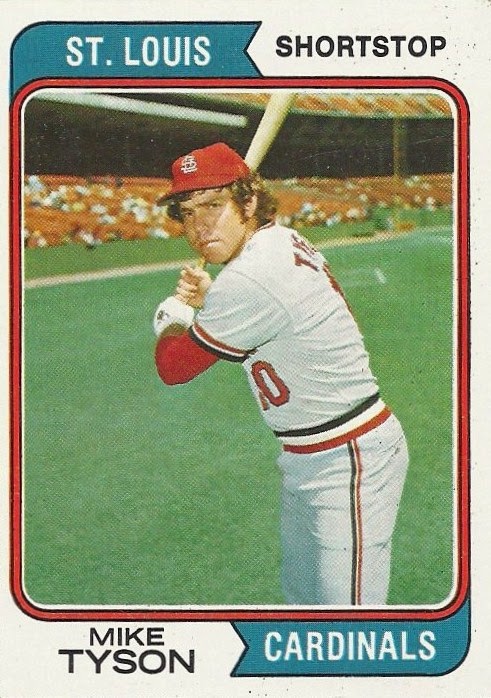 See how different this guy looked before that face tat? Before there was the ear-chewing Mike Tyson there was this guy, who gets a rookie card in this set partly due to good timing. The Dal Maxvill shortstop era had ended during the ’72 season as Dal finished up that year in Oakland as one of the many fill-ins for the injured Dick Green. In his wake came Ed Crosby, who didn’t have enough stick (that’s tough when you’re following a guy with a .217 lifetime average); and Dwain Anderson, who got a spot on that year’s Topps Rookie team on the basis of his .267 average (on only 134 at bats) but had a tough time in the field. Anderson went to San Diego early in ’73, Crosby had been sent to Cincinnati, and the Cards pinned their shortstop hopes on a kid they picked up from Houston, Ray Busse. Busse had hit pretty well in the minors but always had played shortstop as if he was doing so in a minefield so he was an interesting choice to inherit the reins from a Gold Glover. He imploded pretty quickly – the rumor was because of bad nerves – and St. Louis brought up a second baseman to take his place. It was a difficult progression but this Mike Tyson didn’t do that badly, posting some solid D while hitting way better that Dal ever had. Since in the early Seventies Ted Sizemore was pretty much a rock at second, Mike’s ability to move over worked out pretty well for him as well. Here he strikes a pose at Candlestick, letting us know that little guys with a bat – he was 5’9” – can be fearsome also.

Mike Tyson came out of Rocky Mount, North Carolina, where he was a serious deal middle infielder at Nash High, where a few sites out there have him graduating in ’70, when he would have been 20. That couldn’t have been the case, especially since he went to Indian River Community College, a JUCO baseball powerhouse in Florida (that’s redundant) from which he did graduate in ’70 after being selected in the January draft by the Cards. There was an overlap because Mike got in a full season that year in A ball as a shortstop. He stuck at that level the next year through some military time and a move to second base before jumping to Triple A in ’72, posting some nice defensive numbers, and then making his MLB debut in September. In ’74 he was hanging out at Mendoza levels most of the season before a late summer push got him up to his final average of .223. He did lead the NL in double plays at his position though. In ’75 he reported to camp overweight, lost his starting gig in spring training to pick-up Ed Brinkman, and rode the bench the first month-plus. But Brinkman wasn’t the answer and by early June Mike had re-obtained his starting shortstop role, posting a much improved line of .266/4/39 in his 368 at bats. In the last couple weeks he got a bunch of starts at second due to a Ted Sizemore injury. Those games proved harbingers since after Sizemore’s trade back to LA for the ’76 season Mike moved over permanently. The move worked, at least offensively, but it would be a frustrating year for him as two injuries – one in April and one in July – caused him to miss over two months of the season. That was too bad since he had by far his best offensive run: a .286/3/28 line in his 245 at bats. In ’77 he remained healthy and reported his best full-year power numbers but after some early season hitting challenges his average sunk a bit as his line came in at .246/7/57. He retained the starting job in ’78 but further compression of his numbers - .233/3/26 in 377 at bats – meant some lost starting time to Mike Phillips and new kid Ken Oberkfell. In ’79 Oberkfell took over with his .301 average, Mike fell to a reserve role - .221/5/20 in 190 at bats, and after the season he went to the Cubs for reliever Donnie Moore.

In Chicago Tyson reclaimed his starting role at second (ironically from Ted Sizemore) but barely, as he eked out Steve Dillard for playing time there. But the recently departed Manny Trillo had set a pretty high bar for offense at the position and Mike’s line of .238/3/23 in his 341 at bats wasn’t the answer. Neither was Dillard or new guy Pat Tabler in ’81, but Mike moved to a back-up role anyway and was done after the season. He finished with a .241 average with 27 homers and 269 RBI’s.

Trying to find dirt on the web regarding a guy named Mike Tyson who wasn’t a boxer has been nearly impossible. Two of Mike’s sons have played minor league ball and both were born in Kansas City so apparently this Mike spent some time there after baseball but I have found nothing else out there regarding him. 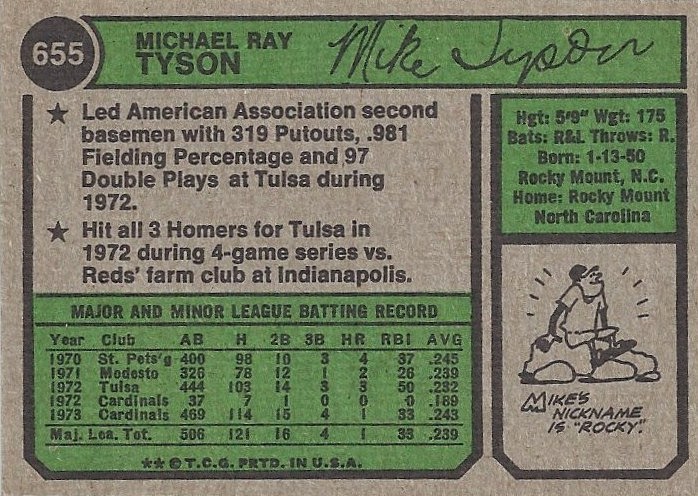 Mike certainly had the right nickname for sharing a name with a heavyweight champ. But Mike got his by virtue of his place of origin. He really could be a streaky hitter.
At one time the Cruz family was seemingly headed in the direction of the Alou one (four brothers made it to the MLB level) so this is a fitting hook-up: