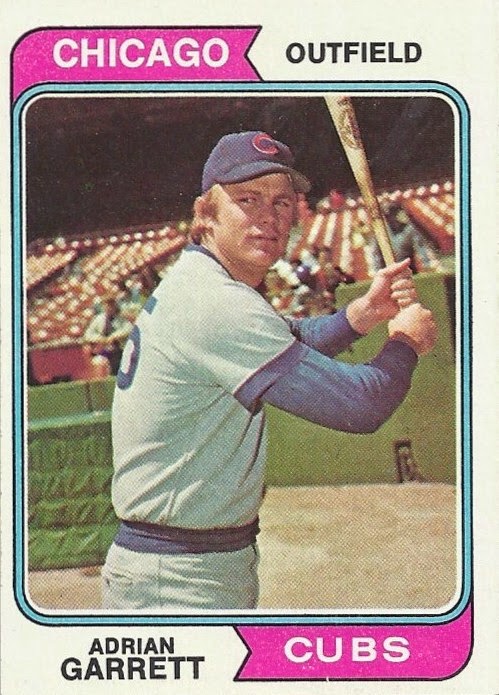 Technically, this is the third rookie card for Adrian Garrett, big brother to the Mets’ Wayne. Adrian had a rookie card in the ’71 set and also back in ’66, when he had one under his nickname, Pat. That’s a mighty long gap and I would bet that Adrian had about the longest one between his initial rookie card and his first solo one – eight years – but I have not the time to research that one. This card commemorates his busiest MLB season to date during his second go-round in Chicago. After returning via a sale from Oakland late in ’72, Adrian had a short .377/8/20 line with a .515 OBA in just 53 at bats in Triple A and was recalled for some back-up work. Despite his card’s designation most of his plate time came as either a catcher or pinch hitter; his best offensive work was in the latter role in which he hit .286. Despite the minimal plate appearances to date Adrian was in the midst of a very long baseball career at the time of this card, in which he appears to be squirreled away somewhere in Candlestick. He wouldn’t see another card until ’76 when he would get his final MLB one on a different team and plate appearance-wise he was still a rookie. That, too, has gotta be about the longest run for anyone with that many cards. So in his own way Adrian helps get to the end of the set with some record-type tidbits. 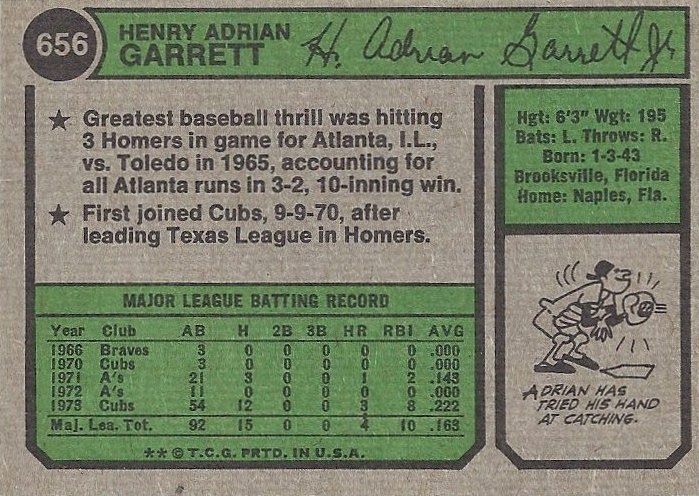 This being Adrian’s first solo card, he has yet another tidbit of never having his annual minor league stats appear on a Topps card. Expanding on the star bullets, he led four leagues in homers in the US and did so once in Japan. He got into catching in spring training of ’73 when Pete Reiser, a Cubs coach at the time, suggested he give it a shot to help him stick. So he did tons of bullpen and batting practice catching and it would be his primary position in three MLB seasons. Another brother Charlie also played pro ball but he only got as high as Double A as his career was interrupted by two full years of military duty. Adrian has a very expansive “Bullpen” tab on baseball-reference.

Sometimes for these guys with limited at bats these paths can be pretty long: