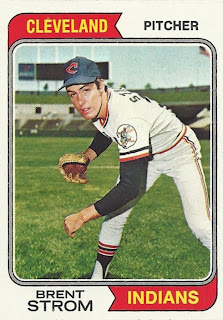 This guy was one of the best college pitchers around in the late Sixties but at Oakland Stadium in '73 that must feel like ages ago. Brent Strom was in the midst of a pretty bad 2-15 run to kick off his MLB career when this photo was taken and in '74 he would do zero time at the top level. His highlight for the '73 season was probably his second win, in which he took a no-hitter against the Yankees into the seventh inning. But pitching for Cleveland that year was no fun for anybody. Things would improve for Brent in a while, but not for terribly long.

Brent Strom grew up in the San Diego area and went to USC on a baseball scholarship after an excellent high school career in hoops and as a pitcher. Before he even played freshman ball he was drafted by the Giants in the second round in January '67. Brent stayed in school, played basketball and baseball and then was drafted by the Angels but he passed again. He did go up north in the summer to play for the Goldpanners for whom he went 9-3 with a save and a 1.85 ERA. He returned to USC where back then the Trojans were alternating CWS titles with Arizona State. Brent would spend two more summers in Alaska - where his pitching teammates included Dave Kingman, Jim Barr, and Rich Troedson - and in his three years he totalled a 21-9 record with a 1.96 ERA with almost a K an inning. Back in California he would win two CWS titles in '68 and '70 and make All-America teams in '69 (second) and '70 (first). He was drafted and signed by the Mets in June of '70, hopefully to follow in the footsteps of fellow alum Tom Seaver. He had a pretty good rest of the summer in Single A with over a strikeout an inning. '71 was another quite good season split between Double and Triple A. After a good early start to '72 at the higher level he moved up to NY that July, pitching both relief and starting, but not terribly well. After the season, with the Mets pretty convinced he wasn't the next Seaver, Brent was traded to the Indians for reliever Phil Hennigan.

Strom spent '74 in Triple A, first for the Indians, for whom he went 3-4 with an ERA over 5.00. The Tribe then sent him to the Padres for pitcher Steve Arlin, but things didn't get much better as he went 3-7 with a nearly 7.00 ERA the rest of the way in Hawaii. After '75 spring training he was sent down again but this time things went extremely well: an 8-3 record with a 1.50 ERA in 12 starts. That got him promoted to home base San Diego where he went 8-8 with a 2.54 ERA and a couple shutouts the rest of the way. He followed that up with a 12-16 record with a 3.29 ERA in '76, pretty good for a Padres pitcher. When '77 spring training opened Brent was listed as number two starter in the rotation behind 22-game winner Randy Jones. But he got off to a terrible start and was moved to the pen before being sent back to Hawaii. There he threw significantly better but in extreme pain. That June he had surgery on his pitching elbow. It turned out that not only did he have big calcium deposits there but his elbow was in such bad shape he had Tommy John surgery to repair it, missing the rest of the season and all of the following one. During the '79 season Brent was able to hook up with the Astros organization and in his 23 games pitched at three levels he went 10-7 with a 3.68 ERA. He improved that mark in Triple A in '80 to 11-6, but with a pretty high ERA and more walks than strikeouts. While the won-loss record was pretty good, his pitching had never really recovered and after a short '81 season in the Dodgers chain he was done as a pitcher. Brent finished up top with a record of 22-39 and a 3.95 ERA. In the minors he went 61-45 with a 3.78 ERA.

Strom soon moved into coaching and would be a pitching coach in the LA organization from '81 to '89. He then moved over to the Astros organization where he was the Tucson coach from '90 to '95 before moving up to Houston for '96. After a successful year at Houston he moved to be the Padres roving minor league coach for a season. He then served the same role in the Expos organization for two seasons before becoming the Royals pitching coach from 2000 to '01. He then returned to the minors, first back with the Montreal/Washington franchise from '02 to '06 and since 2007 for the Cards. He also has a Tucson-based pitching school he runs in the off-season. It's home page is linked to here. 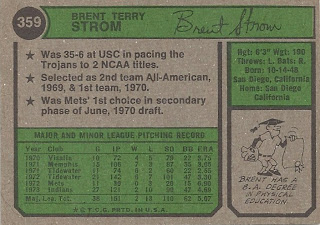 So not surprisingly Brent's star bullets focus on his excellent college career. If you add his summer stats he went a combined 56-15 in three years. He got his undergrad degree in his four years at USC and then a Masters one from San Diego State while he was playing. Despite the arm blowup he's managed to have an awfully long baseball career.

Lots of guys played for the Padres and the Cards but not in Dal's era: