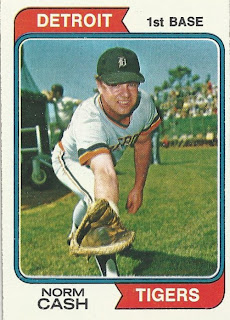 This would be the final card of Stormin' Norman's career. Norm had already seen a serious contraction of his playing time in '73 and in '74 he was unceremoniously dumped before the season ended. It was not a terribly fitting end to a guy's career in Detroit who'd entertained fans for a long time both on and off the field. His best moment of the '73 season may have been when he came to the plate as the final out of Nolan Ryan's no-hitter carrying a table leg. He had his huge '61 season, made a bunch of All-Star teams, was an offensive star in the '68 Series, and twice won Comeback Player of the Year (although I guess that last one could be viewed as a mixed blessing). Plus Norm was a friendly guy who played hard off the field as well, happy to suck some down with fans at local bars. That last trait would get him some trouble at the end. Here he reaches for an imaginary low throw during spring training showing off a mitt that looks as old as he is. Leaning on the batting cage behind him appears to be manager Billy Martin, no slouch in the partying life himself.

Norm Cash was a big deal football star in high school in Texas. He then attended Sul Ross State in Alpine, where as a sophomore he rushed for over 1,200 yards. Signed by the White Sox that spring of '55 he hit .290 in B ball with 17 homers and 64 RBI's. He upped that the next year at the same level to .334 with 23 homers and 96 RBI's. Both years he played primarily in the outfield. He then missed all of '57 and over half of '58 pulling his military hitch. He split the latter season between Chicago, where he only got eight at bats, and Triple A, where he hit .247 in 29 games. In '59 he returned to the top where he spent most of his time backing up Earl Torgeson at first base. After the season he went to the Indians in a big trade that brought the Sox Minnie Minoso. Then before the '60 season began he moved to Detroit for Steve Demeter.

When Cash got to the Tigers he pretty much immediately took over first base, adding a .402 OBA to some pretty good stats. In '61 he had a monster year, leading the AL in hits, average, and OBA (with a .489), but only coming in fourth in MVP votes in the year of the M and M boys in NY. It was also revealed later that he'd corked his bat that year, or at least part of it. While he was never able to match those stats again he was a better than average power guy and fielder at first for the rest of the decade, hitting more than 20 homers each season. In '62 he nearly matched his '61 homer total though his average fell over 100 points. After a couple good years in '63 and '64 he was halfway through the '65 season and was hitting .204 with seven homers and 24 RBI's. The rest of the season he hit 23 homers with 58 RBI's in 78 games, while hitting over .300 to pull his final average up over 60 points. That second half won him his first Comeback of the Year award. In '66 he made his second All-Star team with stepped up stats although that was the first season his strikeout totals exceeded his walks. He was also putting down the sauce pretty good by then and after a significant downtick in '67 experienced another slow start in the big Series year of '68. But he again hit well over .300 in the second half and then turned it on in the Series by hitting .385 with a homer and five ribbies in seven games. He continued his rally in '69 and then hit a wall in '70 when injuries led to his smallest homer output since his ChiSox days. In '71 his big bounce doubled his homer total and nearly did the same to his RBI count. It also landed him two successive All-Star selections and his second Comeback Player award. He got a bit more post-season action following the '72 season and then began his slide. By August '74 he was done. Norm finished with a .271 average with 377 homers and 1,103 RBI's. He also put up a .374 OBA. In the post-season he hit .311 with two homers and seven RBI's in 45 at bats. He ranks in the top 25 in games and assists at first base and in the top 50 in putouts.


Cash had relocated to Michigan during his time with the Tigers on a permanent basis and in the off season worked a bunch locally, including in banking. At the end of his playing career he moved into the auto parts supply business. He also had a gig broadcasting Monday Night Baseball for ABC for a few years in the mid-Seventies. Still a big drinker, he suffered a stroke in '79 when he was only 44. He would eventually recover and then do some local broadcasting in the early Eighties. In '86 he slipped off a dock in rural Michigan, fell in the water late at night, and drowned. He was 51. 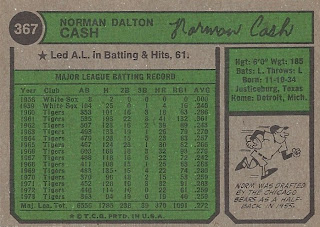 Norm gets one star bullet so it of course covers his big '61. He was drafted by the Bears in the 13th round but opted for the Sox instead.

This has been a lame month of posting. The new blogger format sucks and it’s taken five attempts to post this entry. Also too much work. Let's sum up the rest of April of '73 in the music world. On April 21 a new song took over Number One in both the US and the UK. "Tie a Yellow Ribbon Round the Old Oak Tree" was a huge hit for Tony Orlando and Dawn. On the 26th, Elton John started his own record company, Rocket Records. He was still under contract on both sides of the pond so he wouldn't be able to record for it until '76. On the 29th rising star John Denver began a weekly show on BBC television.

This is the last card in a three-card AL run so let's get Norm and Larry together: