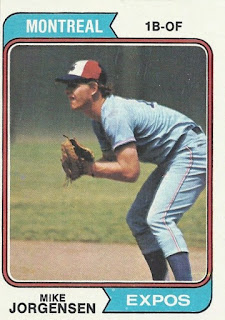 In 1973 Mike Jorgensen broke the LA stranglehold for NL Gold Glove winners at first base. So it’s pretty appropriate that he get an action shot at his favorite position. This may actually be his second action shot of the set in this position since I opined way back that I believed he is the guy in the background of Mike Marshall’s card. Mike would have been in the middle of his second season in Montreal about the time this photo was taken and during his time with the Expos, his best run by far in the majors, he was known for his defense and his ability to get on base. Along with his NL-leading fielding percentage of .995, his walk total topped his strikeout one for the first time of what would be four consecutive years and his OBA added over 100 points to his average. He’d better both numbers the duration of his stay with Montreal and be one of the team’s most consistent performers the next few seasons.

Mike Jorgensen was born in Jersey and moved to Bayside, Queens, NYC, as an elementary school kid. From that age through high school he seems – according to posts on the “ultimatemets” site – to have been  a star at everything from baseball (first base), basketball (he could dunk from a standing position), track (sprinter and relay guy), and football. A star of some local travel and all-city teams he was drafted and signed by the Mets after his senior year of ’66. That summer in Rookie ball his .313/8/37 stats in 150 at bats got him on his league all-star team, as did his .295/5/41 year in A ball in ’67. Both seasons he played nearly exclusively at first. In ’68 he began losing playing time to military time and a disappointing month in Double A - .160/0/10 in 100 at bats – was followed by a revival in A ball that produced a .315/3/27 season in 213 at bats and then got him some late September looks in NY. In ’69 he missed a couple months to his military hitch but posted by far his biggest offensive season to date with .290/21/69 numbers in 359 at bats in Triple A. Again, nearly all his defensive time was spent at first. In ’70 Mike had a good spring and made the Mets roster for the season, playing first behind Donn Clendenon and Art Shamsky. He also put in some outfield time in center and did pretty well defensively but was underwhelming at the plate in his few at bats. In ’71 he began the season in Triple A, returned to NY in June and hit close to .300 his first month, went back to Triple A in mid-summer after his average tailed off, and finished the year back in NY. Ed Kranepool had returned to the line-up so nearly all Mike’s games that year up top were in center. His numbers in Triple A - .342/15/41 with a .445 OBA in 228 at bats – pretty much sealed the deal on whether or not he needed more time in the minors. After another good spring training the Mets decided they needed some more outfield offense and during the short players strike to open the season they sent Mike, Ken Singleton, and Tim Foli to Montreal for Rusty Staub.

The Montreal first base position had resembled a revolving door during the first three years of the franchise. That would be modified a bunch after the acquisition of Jorgensen and his fellow ex-Mets. Mike would pretty much split time with Ron Fairly and/or Hal Breeden the next few seasons, turning the position into one of the team’s most productive, both offensively and defensively. He got his show rolling by homering in his first at bat as an Expo and along with his excellent defense at first started 28 games in center. In ’73 he played first nearly all the time to win that Gold Glove. He maxed out offensively the next two seasons. ‘74 started oddly. Montreal had a nasty bad spring training after the promise showed in ’73 and apparently Mike was one of the goats because he didn’t even get a start until June and that was in left field since Singleton had taken over right and new acquisition Willie Davis center. He’d finished July hitting only .167 in his reserve role but his average took off pretty immediately once he got some regular time and he finished with a .310 average and .444 OBA with eleven homers and 59 RBI’s in his 287 at bats. In ’75 Fairly went to St. Louis and Mike again got the lion’s share of starts at first, putting up a .261/18/67 season with a .378 OBA in 445 at bats, a career high. But ’76 was a mess, as the slide begat by the horrible trade of Singleton and Mike Torrez to Baltimore for a couple guys who wouldn’t last the season ended in the cellar and first base was again reduced to a hodgepodge. Mike’s numbers slid as well to a .254/6/23 season in 343 at bats, though his OBA was still a relatively healthy .349. A couple games into the ’77 season he was sent to Oakland for pitcher Stan Bahnsen.

Going to the post-diaspora A’s wasn’t exactly a cure for the losing in Montreal and Jorgensen again found himself on a last place team. He’d put up a slight premium to his ’76 numbers the rest of the way and then leave via free agency for the Texas Rangers. His ’78 was a big bust and ’79 wasn’t much better, especially after a mid-season beaning by Andy Hassler put him in intensive care for a week and made him miss over a month of the season. After it ended he was sent back to the NL and the Mets for Willie Montanez, leaving behind an AL mark for his nearly three seasons of .228/15/57 in only 457 at bats. His OBA slid to .315 as well. In ’80 Mike swapped starts at first with Lee Mazilli and revived a bit offensively, with a .255/7/43 season in his 321 at bats. In ’81 NY brought back Dave Kingman and he was a safe guy in the field only at first so Mike was relegated to late inning defensive and pinch-hitting work which he’d do the rest of his career. He remained with the Mets midway through ’83, went to Atlanta for about a year, and then went to St. Louis in mid-’84 as part of a deal for Ken Oberkfell. He finished up with the Cards in ’85, his final at bats being in that year’s World Series. Mike ended with a .243 average, 95 homers, 426 RBI’s, and a .347 OBA during the regular season. In the post-season he went hitless in five at bats.
Jorgensen only played with the Cards for a bit but it was the beginning of a long relationship. After the ’85 season he was named the team's director of minor league hitting and then before the ’86 season was out was named manager of the team’s Florida State League franchise and he won a championship. He then managed in Triple A the following three seasons and during that time went a combined 248-239. Following the ’89 season he became assistant director of minor league operations and in ’92 dropped the assistant tab. He continued in that role through 2001 except for a short time in ’95 when he became the manager of St. Louis in a transition role between Joe Torre and Tony LaRussa. Mike went 42-54 in his only managerial role up top. From ’02 through ’07 he assumed various admin roles with the club and since 2008 he has been a special assistant to the general manager. 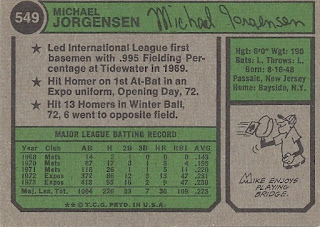 Mike gets one of the few references in this set to his winter stats in his star bullets. He also is, I believe, the first guy who gets connected to Bridge in this set. My mom used to play the newspaper version of that game all the time. Regarding the LA monopoly on Gold Gloves mentioned above, Wes Parker won it at first base every year from ’67 to ’72 and Steve Garvey turned that trick every season from ’74 to ’77. So Mike’s award really was an aberration.

Let’s use a fellow Montreal first baseman for this exercise: