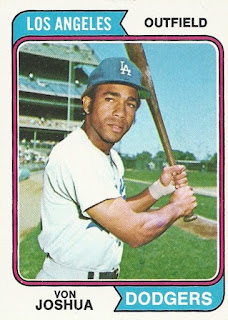 Shea Stadium looks very colorful behind Von Joshua. It looks like a good day to play ball, though there was as good a chance Von would get into a game as that he wouldn’t. ’73 was a frustrating year for him. Everything was finally going his way: Frank Robinson was traded to California, leaving Willie Crawford free to concentrate on right field; Manny Mota was getting old and was ready to move into a reserve role; and Von’s good spring got him the starting spot in left field to open the season. And he did great, starting off the season at a .333 clip through the first eleven games when he was hit by a pitch, breaking his right wrist. Things moved fast in LA back then, and by the time Von returned, Mota was back in his old position and being spelled by Tom Paciorek and Bill Buckner, who was being pushed out of his first base role by the emerging Steve Garvey. While Von got some starts upon his return, his injury contributed to a withering of his average and with Manny and Buckner hitting above .300 he was again the odd man out, finishing out the season mostly as a defensive replacement and a pinch hitter. It was still his busiest year up top to date and he would have to get elsewhere to return to a starting role. It seems in this shot he’s letting the photographer know how he feels about the whole thing.

Von Joshua grew up in Oakland where he was a good enough at baseball to warrant being selected in the first round of the draft by the Giants in January of ’67. By then he was a freshman at Chabot College – also attended by Dick Tidrow – and opted to stay in school since the offered bonus wasn’t enough. He played out his college season, was spotted by an LA scout, had a tryout, and was signed by the Dodgers later that summer. He began his career quite well, hitting well over .350 in both Rookie and A ball. Primarily a center fielder he moved up to Double A in ’68 where he continued to hit well despite beginning his military hitch and missing a bunch of time. By ’69 he was doing reserve work and saw more action in Triple A, where he would also spend time the next three seasons. He got his debut up top in late September that year and then began ’70 pulling his hitch but got some starts in center and left when he returned in May. Von hit over .300 in his starts but LA was awash in young outfielders and the bulk of his time came in late innings. Same story in ’71: a May arrival from camp, but just a few at bats his month in LA and then back to Triple A for the duration of the season. All of ’72 was spent at the lower level where Von put up his best numbers and then won a batting title in winter ball. After his frustrating ’73 he asked for a trade elsewhere but was back for ’74 when he again played a reserve role, hitting .234 before getting some post-season at bats. He again asked to be traded and in January was selected by the Giants off waivers for about $20,000.

In ’74 San Francisco had perhaps the finest outfield in the NL with Bobby Bonds, Garry Maddox, and Gary Matthews, all of whom were relatively young. But Bonds was sent to the Yankees for Bobby Murcer prior to the ’75 season to get more consistency at the plate. Joshua was obtained to again do back-up work and provide some of the speed lost when Bonds left. But Von had a great spring and soon into the season when the Giants were looking for a first baseman, they felt they had room to trade Maddox to the Phillies for Willie Montanez. Montanez would have his best offensive season for the Giants that year and Von moved pretty seamlessly into the regular spot in center and put up by far his best year, hitting .318 while scoring 75 runs and stealing 20 bases, all career highs. The next year Von resumed his role in center and was hitting .300 through April. But a slump tapered his average almost 40 points and in another episode of bad timing it happened as two young center fielders – Larry Herndon and Jack Clark – were waiting in the wings. Herndon would win the starting role as Von was sold in early June to Milwaukee. Von assumed the starting role for the Brewers and while his hitting didn’t improve much - .267 for Milwaukee against .263 for the Giants – there was no pressure from any new guys. In ’77 he hit .261 as the starting guy in center.

The Brewers in ’78 would be markedly different – and better – than they were in ’77 and one of the most notable changes was in center field. Joshua’s spring training wasn’t too hot and Gorman Thomas indicated he was finally ready to be an MLB player so Stormin’ Gorman got the nod there while Von was released. He moved south of the border to play for – and briefly manage – Tabasco of the Mexican League. Following his year there he returned to the States and LA where he reprised his back-up role and hit .282 in an off year for the Dodgers. He was then taken off waivers after the season, this time by the Padres, who in ’80 employed Von in the same role. After hitting .238 in much less at bats he was released in late August. He returned to Mexico, where he played and coached through ’82, his final year as a player. Von finished with a .273 average with 30 homers and 184 RBI’s. He went hitless with a walk in five post-season appearances and hit .315 in the minors.

After taking a year off Joshua returned to coaching and LA by becoming a hitting coach in the Dodgers chain, which he did from ’84 to ’92. He then took on the same role in the White Sox chain from ’93 to ’97 before moving to Chicago as its hitting coach from ’98 to 2001. In 2002 he was the minor league hitting coach for Toronto. In 2003 he hooked up with the other Chicago organization and was a Cubs minor league hitting instructor through mid-’09 when he was again promoted to the top. That lasted the rest of the season and since 2010 he has been the Triple A Iowa Cubs hitting coach. 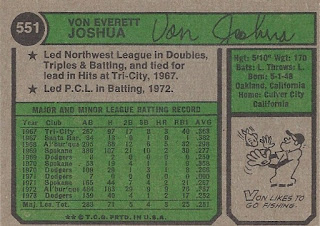 So Von won two batting titles in ’72 which for sure prompted his ’73 promotion, brief though it was. His parents were both teachers and Von has opined more than a few times that he actually prefers coaching in the minors since the players there are actually looking to be taught.

Years earlier these guys would have been cross-town from each other, NYC being a very big town: