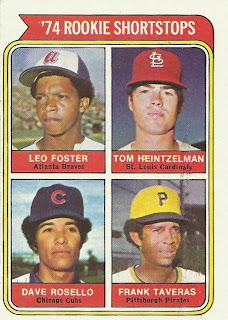 This card gives us another bunch of young unhappy faces. Given that two of them are standing under a doom-filled sky and that one – Dave Rosello – appears to be standing in front of an oil pump, I sort of get why. But why Leo Foster? Perhaps he is rehashing his MLB debut from a couple years earlier. It was no fun at all.

According to a Mets site, Leo Foster was a high school star in Kentucky in the  big three sports as well as track and that certainly seemed to be seconded by the Braves, who made Leo a second-round pick in the ’69 draft. That summer he hit .229 in A ball before having a bang-up fall in the Instructional League, hitting .321 with a .397 OBA and ten stolen bases. He would then begin his military service, missing some time each of the next few years. When he showed up to training camp in West Palm in ’70, he and Dusty Baker were kicked out of a pool hall because of their color. Nice start and Leo would get a few of those. But he hit .263 with 16 stolen bases that year in Double A and the next year upped his average at that level to .296 before a July call-up to Atlanta where regular shortstop Sonny Jackson had to play the outfield due to Rico Carty’s injury. Leo’s debut was memorable, but not in a good way. On his first play at short he made an error on a Dave Cash hit, and Cash would later score. He then flew out his first at bat, hit into a double play his second, and a triple play his third for the wrong kind of cycle. He went hitless in his ten at bats and then returned to the minors, hitting .180 the rest of the way in Triple A. In ’72 he hit .233 at that level and in ’73 .210 before another few MLB at bats late in the season. In ’74 he spent the full year on the Atlanta roster, backing up Craig Robinson at short while hitting .196. After that season he was traded to the Mets for catcher Joe Nolan and for NY he would hit substantially better at the Triple A level while also branching out to play second and third. In ’75 he hit .247 with a .354 OBA, his best by far since his first year. In ’76 he hit .287 with 39 RBI’s in a bit under half a season and in ’77 .274 in his couple months at that level. He also did better up top, in ’76 hitting .203 with 15 RBI’s in just 59 at bats deep on the depth chart and in ’77 hitting .227 while again playing behind Bud Harrelson and Mike Phillips. That was his final MLB time and Leo finished at that level with a .198 average. After the ’77 season he was traded to Boston for pitcher Jim Burton. After hitting .239 for the Sox Triple A club in a reserve role he finished things up the following year in the short-lived Inter-American League, leaving behind a .248 average for his minor league time. What Leo has done since is a big mystery.

When Tom Heintzelman was born his dad had just returned stateside from his WW II duty to return to his pre-war profession as an MLB pitcher. Ken Heintzelman won 77 games, mostly as a reliever for Pittsburgh and Philadelphia from the late Thirties to the early Fifties. Tom was born in Missouri where he played third base and pitched a bit in high school before moving on to Parsons College in Iowa where he continued to play both roles. Parsons was sort of a high-profile school back then, not all for good reasons, and it would shut down in ’73. When Tom finished his four years there he was drafted by the Cards in ’68 and was then able to get a year in of Rookie and A ball, during which he hit .270, before he was drafted again, this time into the military. Unfortunately for Tom he went high and was unable to do reserve duty even though he was married with a daughter, so he did two full years of stateside service, missing all of the ’69 and ’70 seasons. When he returned in ’71 to Double A ball he had an understandably off year, hitting .219 while playing mostly second. In ’72 he improved to hit .263 with 13 stolen bases at that level and then in ’73 in Triple A he hit .284 before debuting in St. Louis in August, hitting .310 the rest of the way and helping fix the middle infield morass that was plagued by a couple burnouts by the shortstops. Tom then got some spring and summer work in St. Louis the following year backing up Ted Sizemore but only got 74 at bats in which he hit .230. Around that time he hit .258 back in Triple A before being traded to San Francisco after the season for pitcher Jim Willoughby. That first year he split time between second and third in Triple A while hitting .245. The next season he became a power guy, hitting .277 with 15 homers and 103 RBI’s and 92 runs. He maintained that pace the next year with a .266/8/85/80 season before he was moved up to San Francisco where he rarely played. He then began the ’78 season with the Giants but with Bill Madlock ahead of him at both his spots he barely played, hitting .229 in a few at bats. He spent most of the rest of that season in Triple A and all of the next, his final year as a player. Overall Tom hit .243 in his 140 MLB at bats and .259 with 57 homers and 67 stolen bases in the minors. He’d ended up putting in most of his time at Phoenix while with the Giants and it appears that is where he remained on a full-time basis after playing, with Mesa listed as his home when his dad passed away in 2000, but I have no idea what he did after playing.

Dave Rosello got signed by the Cubs after playing summer ball in his native Puerto Rico late in ’68. He didn’t hit too well his first summer in the States, hitting .189 in A ball in ’69, but he was never supposed to have a great stick. He did better in ’70 with a .243 split between A and Double A but then sank to .228 at the higher level in ’71. But then came a long residency at Triple A Wichita during which he found some offensive magic. In ’72 he hit .271 while making his league’s all-star team which he would also do two of his next three seasons. He hit .250 during his short look in Chicago during which he played shortstop, his regular position to date. In ’73 it was back to Triple A where he hit .313 with 51 RBI’s in his 367 at bats, by far his best run production. When Dave was up for his late summer time that year he played second, mostly because Glenn Beckert was declining faster than expected. Then in ’74 Dave stayed there after new guy Vic Harris sort of exploded in a not good way where the two split starting time with three other guys. By late summer it was clear that Dave wasn’t much of an improvement over Harris and while Billy Grabarkewitz was getting the most starts there Dave got back to Wichita where the last two months he hit .389. He remained there for pretty much all of ’75 where he also got back to short and put up a .259 average with 29 doubles in his busiest year. The next two years were all Chicago as he hit .242 backing up Mick Kelleher at short in ’76 and .220 while doing the same – but on a much less regular basis – for fellow ’74 rookie Steve Ontiversos at third. That December Dave went to Cleveland for a couple minor leaguers and in ’78 he had one of his best years in Triple A with a .282/9/71 season while putting in most of his time at third. The next three years were spent in Cleveland where Dave did back-up work at second, averaging .244 in just over 300 at bats. In ’82 it was back to third base and to Triple A in his final season as a player. Dave finished with a .236 MLB average and hit .258 in the minors. From what I can tell he returned to PR after he played.

Like Dave Rosello, Frank Taveras was signed as a free agent from his island home in ’68, except that Frank was Dominican, was signed by Pittsburgh, and was signed early enough to get in some games that summer. He had a bipolar first year, hitting .340 in Rookie ball, but only about .200 in A ball. In ’69 he hit .222 in A ball and then in ’70 got up to .260 with 35 stolen bases, his first season in which he concentrated on shortstop after playing mostly second until then. He split '71 between Double A and Triple A, hitting .226 with 30 steals and then spent nearly all the next two years at the higher level, averaging .244 with 29 stolen bases a season. After some short MLB looks those years he got pulled up in ’74 after Gene Alley was officially done and he and fellow rookie Mario Mendoza took over shortstop. For the next two seasons Frank got the most work of the two. His offense was a bit light but the Pirates had plenty of that and he hit better than Mendoza. In ’76 he won the position outright and both his average and his stolen base totals moved up significantly: in ’76 he hit .258 with 58 steals; in ’77 .252 with 70; and in ’78 .278 with 46. He led the NL that middle year. In ’79 he would prove that timing is everything – in a bad way for him – when early in the season he was traded to the Mets for Tim Foli. Foli went on to win a Series ring and poor Frank got to hang out with one of the NL’s sorriest teams. He hit .263 and .279 for NY the next two years as its regular shortstop and then fell to .230 in ’81 as he split time with Bob Bailor. After that year he went to Montreal where he occupied a reserve role in his final season, finishing with a .255 average and 300 stolen bases for his career. In the post-season he hit .111 in five games. Like the rest of these guys he pretty much disappeared profile-wise after he played. 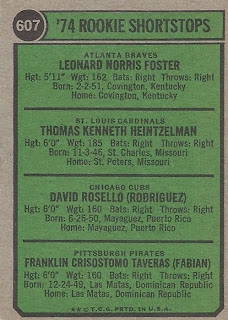 Outside of Tom Heintzelman, these guys were all pretty small, no surprise given their positions. They totaled 17 MLB seasons with a stolen base title.

Some NY guys help getting from the last card:

More of the same for around the card:

Madlock had the good timing for that ’79 Pirates team; Taveras didn’t.