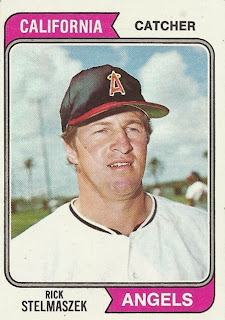 If you go by the cards Topps made available for ’74 Rick Stelmaszek was the Angels starting catcher for 1973, all 26 at bats of him. That’s because Topps didn’t issue cards for Jeff Torborg – 255 at bats – John Stephenson – 122 at bats – or Art Kusnyer – 64 at bats. Rick actually did pretty well card-wise himself by Topps. He got four cards during his career, or one for every 22 MLB at bats. On each one he had a different hat: Washington in ‘70; Texas in ’73; this airbrushed one; and another airbrushed Cubs hat in ’75. This card photo may be a bit old since that appears to be a Senators cap on the guy behind Rick. Not surprisingly he moved around a bit in ’73, beginning the year as a back-up to Dick Billings in Texas before a May trade that sent Mike Epstein, Rich Hand, and him to California for Lloyd Allen and Jim Spencer. He spent the next two months in Triple A before getting back upstairs in mid-July to back-up the above trio. Rick was pretty itinerant back then but when he finally settled in one place he would stay there a loooong time.

Ray Stelmack was an outfielder signed by the Yankees in the late Thirties who didn’t hit terribly well and after doing his WW II time became a pitcher. By ‘48 he was pretty much done as a player, was living in the Chicago area, and had a son named Rick who would opt to embrace the full family name. Rick went to Mendel High, a Catholic school that rang its last bell in the Eighties. There he was all-Christian league his senior year of ’67 as a catcher before he was drafted by the Senators. He didn’t get things going until late the following spring which may have been due to military duty or some time at Depaul. That season he hit well at one A level spot and not so well at another one, though at both he had very good OBA’s which would be a hallmark in his career. In ’69 he had a nice line at that level bolstered by a .429 OBA and in ‘70 at Double A put up a .398 though his supporting stats weren’t quite as good. In ’71 his OBA remained the same, as did his average, when he moved up to Triple A in a season interrupted by a couple early summer weeks in DC. ’72 was all Triple A, part of it as a loaner to the Cincinnati chain. After his ’73 run he opened the ’74 season back in Triple A where he put up a line of .269/6/40 with a .399 OBA through July when he was sent home to the Cubs for pitcher Horacio Pina. He spent the balance of the season on the Chicago roster behind George Mitterwald and Steve Swisher, hitting .227 with a .364 OBA and seven RBI’s in his 44 at bats. ’75 was then all Triple A - .265/6/47/.376 – before an early ’76 trade sent him to the Yankees for a minor leaguer. He spent a year at Triple A Syracuse and then ’77 back in the Texas system at the same level before in ‘78 hooking up with the Twins as a player/manager back at the A level. That was Rick’s final season as a player. For his MLB time he hit .170 in those 88 at bats and in the minors .250 with an OBA above .400.

With his keen eye Stelmaszek seemed a natural for a coaching gig after he was done playing and that’s exactly what he did. He remained at the Minnesota A franchise as its manager through ’80, going 199-212 during that span and winning his league’s manager of the year award his final season. In ’81 he was promoted all the way up to Minnesota where he became the Twins bullpen coach, a job he held through 2012. In his first year away from baseball as an adult he has been semi-retired and learning to golf. 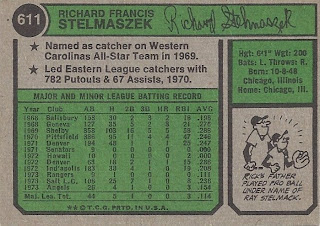 Rick had two rookie cards and two regular ones, both of which were airbrushed. He was quite good defensively and also led his league in assists and double plays in ’68. He had one of the longest single-team coaching runs ever.

Speaking of long runs, it has been a long time since I did anything about Watergate, which was ceratinly, one of the biggest news stories running the time covered by this set. As a recap, on the few posts I actually did on the subject, five men were busted attempting to plant bugging devices in the offices of the Democratic National Committee base on the sixth floor of the Watergate Hotel in June of ’72. They, along with E. Howard Hunt and Gordon Liddy, would be indicted that September and their trial would begin the following January. Shortly into the trial Hunt pled guilty and four days later four of the five burglars pled the same. That was as far as I got and to restart this process I want to highlight some investigative stuff along the way unearthed by The Washington Post.

6/19/72 – The Post revealed that Frank Sturgis, one of the burglars, was a US “soldier of fortune” who temporarily lost his citizenship when in the late Fifties he fought alongside Fidel Castro in Cuba. Bernard Barker, another burglar, was a POW during WW II and was also a one-time ally of Castro’s and for a time worked in Cuba’s secret police. Those two and the two other native Cuban burglars had all become disenchanted with Castro and were involved in the Bay of Pigs mess. James McCord had been a security consultant for both the Republican National Committee chaired then by Bob Dole and the Committee to Re-elect the President chaired by former Attorney General John Mitchell. Both claimed a lack of knowledge regarding McCord’s involvement with the burglary.

8/1/72 – The Post reported that a bunch of money found its way to Bernard Barker’s Florida bank account. $25,000 was a cashier’s check made out to Kenneth Dahlberg, CREEP’s finance chairman for the Midwest. Dahlberg claimed he gave the check to either John Mitchell, CREEP’s chairman, or Maurice Stans, CREEP’s overall finance chairman. Stans had been Secreatery of Commerce under Nixon. Barker had also accumulated $89,000 in checks from Mexican lawyer Manual Daguerre. It would later turn out that Daguerre was a conduit for CREEP to raise money in The States that would then be filtered through Mexico so that donors could remain anonymous, thereby skirting campaign fund-raising laws. So both sources of funds were linked to CREEP. Other background revealed that Dahlberg owned a firm that made hearing aids and was Nixon’s finance chief in Minnesota during the ‘68 campaign, an important state since Nixon’s opponent in the ’68 election, Hubert Humphrey, was from Minnesota. The article also revealed that a few days earlier G Gordon Liddy was fired from a consulting post to CREEP after refusing to talk to the FBI about the break-in and that Democrats believed that Chuck Colson, an advisor to the President, was a player in the break-in since it was he who had hired E Howard Hunt. Things were getting pretty sticky.

The Chicago connection seems the most obvious for the hook-up even though these guys were a few years apart. I wonder if they faced each other in high school?: