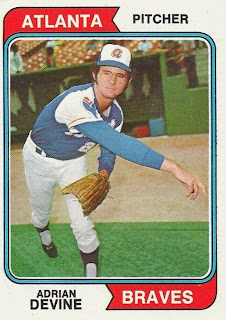 And the balance reasserts itself as another final card is followed by a rookie one. Adrian Devine didn’t have a crazy great time at any level in ’73 but the Braves were really desperate for bullpen help that year so he got the call in late June and never went back down. Adrian was used sparingly the rest of the year and despite his high ERA managed to get four saves. It was otherwise an important year for him because while warming up for his first MLB game his shoulder popped and it would turn out to be rotator cuff damage he would have to pitch through the rest of his career. He shows his stuff in Candlestick with an expression that would grace all his cards though his second one wouldn’t occur until the ’77 set as he’d spend the bulk of the next two years in the minors. But he’s full of smiles these days.

Like Luke Walker from two posts back, Adrian Devine grew up in Texas, he in Galveston. There he played high school and American Legion ball well enough that he was a second round pick by Atlanta in the ’70 draft. That first summer as a starter in Rookie ball was a bit tough but he moved up to A ball the next year and looked to be putting together a pretty good season. But he missed the bulk of it to either injury or military time. He kept moving up though, and after a pretty good camp in ’72 he continued to throw well that year in Double A. After his ’73 season he returned to Triple A where he only got into four games the next year while rehabbing his arm. He came back strong at that level in ’75 when he went 10-6 with a 2.98 ERA as a starter before getting into a few games back in Atlanta at the end of the year. In ’76 he remained up top as a reliever and – still a rookie – went 5-6 with a 3.21 ERA and nine saves. Following the season Adrian was included in the big trade to Texas for Jeff Burroughs. He had a pretty good year for the Rangers, going 11-6 with a 3.58 ERA and 15 saves. He was then involved in an even bigger deal as he returned to Atlanta in the big four-team trade that also moved Bert Blyleven, John Milner, and Willie Montanez to various spots. Back with the Braves Adrian did his first year of spot work but only got in 65 innings as he went 5-4 with an elevated ERA. In ’79 it was all pen work again as he went 1-2 with a 3.24 ERA in about the same number of innings as his prior year. After the season he ponged back to Texas with Pepe Frias for Larvell Blanks and Doyle Alexander. He pitched very sparingly for the Rangers this time and after a few innings in ‘81 in Triple A he was released, ending his pitching career. Adrian finished 26-22 with a 4.21 ERA and 31 saves in his MLB time and was 31-30 with a 3.83 ERA in the minors.

Devine was very concerned about his next professional step in early ’82 when it was pretty apparent he was done with baseball. He appears to have remained in the Atlanta area and at some point became involved with Devine Baseball, an instructional camp and facility in suburban Atlanta that appears to be run by his son. Adrian has a Facebook page on which he appears to be quite the foodie, so perhaps that was a career choice for him at some point as well. In any case, he looks and reads as if his life post-baseball has been pretty good. 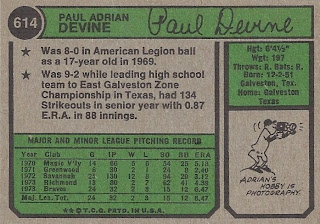 Adrian goes with his given first name for his signature on this card but on future ones he would sign with his middle one. His star bullets give us a glimpse at some of the stats that made Atlanta draft him.

Yesterday’s Watergate recap got us up through the end of February 1973. Earlier that month a couple important things happened. On February 2, Judge John Sirica, who oversaw the trial of the conspirators, indicated that he would present the Grand Jury called to further investigate charges with several other names he believed were connected to the case. On February 7 the Senate voted unanimously to set up a seven-member Select Committee to investigate Watergate and other potential political espionage in connection with the ’72 campaign. On to March:

3/19/73 – James McCord, who was found guilty of all counts in January, wrote a letter to Judge Sirica in which he indicated that he had been pressured to plead guilty and then go radio silent – as E Howard Hunt had done; that he and others had knowingly perjured themselves during the trial; that the break-in was not a CIA operation as he’d indicated during the trial; and that other unnamed government officials were involved in the conspiracy.

3/23/13 – Judge John Sirica made public the letter from James McCord. He indicated that McCord’s sentence would be delayed until June 15, 1973 as McCord was now a cooperating witness for the government and the Grand Jury. He gave the four other burglars suspended sentences until that date as well in order to compel them to become witnesses also. G Gordon Liddy was sentenced to between six years and eight months to 2 years and fined $40,000.

More next post. For the hook-up we go through the AL and a good guy who passed away way too young:

I’ll be away next week. Happy Thanksgiving!
Posted by wobs at 11:59 PM